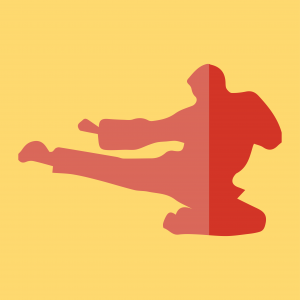 On their honeymoon, my parents took videos and pictures, wanting to forever remember their time together. One video in particular featured them running toward each other on a beach with the sunsetting and embracing. Cheesy, yes, but also cute. The twist here was that this video was going to be produced in slow motion in an attempt to make the moment “last longer” (special effects were “in” at the time).

As my parents recount, they were set 50 feet apart and given directions to run and embrace. The videographer counted down from three and gave a thumbs up indicating the camera was rolling. They prepared themselves to run. 3… 2… 1… Thumbs up. My parents start running at each other in slow motion. Yes they actually ran IN SLOW MOTION. Not fully understanding how special effects worked, my parents figured that was how slow motion film was created.

Upon seeing this, the videographer stopped the camera and immediately started hysterically laughing. My parents, realizing their folly laughed along with him. And to this day they haven’t stopped laughing about it. Laughter is something that joins us, and if you can’t laugh at yourself, then you are taking yourself too seriously, they explain to my sister and me each time they recount the story.

While my sister and I have never seen the video, we are told it was one of the best memories our parents share with one another, not because of the video itself, but rather because of the circumstances that surrounded it. Of course, each time our parents recount the story to us, my sister and I act as surprised as we were the first time, and exchange a look to one another that says something along the lines of I can’t believe mom and dad would think that’s how slow motion worked. We then typically converse about how willingly moving in slow motion to create a worthwhile effect seems ridiculous and futile… This was my understanding at least until this past semester.

Tai Chi, in addition to being an ancient Chinese martial art, is a class that I take every Tuesday and Thursday morning. The art was invented thousands of years ago, and at the beginning of the semester, each class felt it lasted that long. Class consists of breathing and moving slower than sloths, I thought as I would trudge my way to Wilson gym each morning, barely awake enough to complete the simple breathing exercises class began with. I had a million things I wanted to do, and waking up to do breathing exercises with strangers, many of whom much older than I, was not high up on that list.

It wasn’t until the most recent recounting of my parents famous video-making story that my entire perspective shifted. I was home the week following fall break, and the famous story came up during one of our family order-in dinners from the best Italian restaurant in town. The story began as it had for years, however, its conclusion was different. Our parents decided that because my sister and I were mature enough we could understand that the true driver of our

When else in their lives would they be on a beach with each other filming a moment overflowing with joy like waves overflow the boundaries of the ocean and the sand. And, just as in that moment the sand and ocean become one single entity greater than any of the two could be alone, that day on the beach our parents became one single entity, linked through love… or so they explained. It wasn’t the ridiculousness, it wasn’t the humor, that made the memory so special. It was the beauty of the fleeting moment that they know although would never be re-lived, would always be remembered and treasured.

And then it clicked. Tai Chi completely changed. When else would I have the opportunity to embrace such an experience.

Instead of being a class filled with strangers. It became a class of eight other students across all ages and academic paths ranging from undergraduate sophomores majoring in engineering or economics through Ph.Ds and postdocs studying physics or Latin American studies. The class went from feeling foreign to feeling like a United Nations including representatives from around the world, each gathering in Wilson Gym to do what appears to be slow motion movements and breathing but what actually is an art that joins us together. After all, art is a universal language. Tai Chi went from a class where I walked in questioning why I decided to take it, to a class that I left feeling rejuvenated.

This revelation was reinforced this past Tuesday. While we typically focus on physical Tai Chi development, the professor paused class to review the philosophical essence of the martial art. He gave a broad overview of the Daoist principles that govern the martial art. We were fascinated with how much value Tai Chi places on harnessing one’s energy to be in harmony with his or her surroundings.

Our professor then explained how he was trained in Aikido (a Japanese martial art) before he learned Tai Chi, and how similar he finds the two arts. Typically, Tai Chi and Aikido would never mix. They come from two different, and sometimes competing cultures and on the outside seem incomparable (Aikido being fast and sword based while Tai Chi is slow and body based). However, our professor explained how he found solace and true harmony through practicing both arts. He expressed that to him, all martial arts are different paths up the same mountain, and the closer one gets to the peak, to the level of mastery, the more the arts converge. Both Tai Chi and Aikido are grounded in living in harmony with each other and the world. Therefore, both martial arts are at their core similar. Outside of class, he runs a martial arts school that teaches both Aikido and Tai Chi, a rare phenomenon in the martial arts world.

It was fascinating how his slight change in perspective unites two historically feuding practices under a common theme. This point resonated with the lessons I learned from my parents, whose positive outlook changed a moment into an eternal memory with a lifetime worth of laughs.

Class ended with the professor explaining a quotation foundational to the martial arts he practices…If you are one with the universe, then anyone attacking you is attacking the universe. It seems that a slight change in perspective can go a long way in embracing this oneness.

Thank you for reading. Feel free to email me your comments at carlins101@gmail.com. I would love to hear from you!