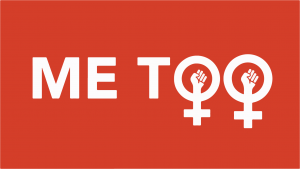 A few weeks ago, yet another scandal broke out within the Hollywood drama circuit. A modern twist of what I have come to see as the true Tale as Old as Time, news broke that yet another high power male authority figure has exploited his power, sexually harassing countless women (eight of whom had official settlements with their abuser before the current case against him), followed by a huge cover-up scenario that had kept the sexual predator active for more than three decades. When asked about the situation, the perpetrator, Harvey Weinstein, responded with the almost remorseful statement, “I appreciate the way I’ve behaved with colleagues in the past has caused a lot of pain, and I sincerely apologize for it. Though I’m trying to do better, I know I have a long way to go.”

I loosely followed this scandal, in one of those situations, “oh, that’s sad, but he will probably get away with it anyway,” scroll, scroll “oh, look who is out of the White House this week.” In reading on the Weinstein case, I was completely numb to the situation-it wasn’t shocking, it wasn’t jarring, it was just what has become normalized in the life of an American female. I had read the same situation countless times – Billy Cosby, Jimmy Savile, Ray Rice – and honestly was a bit sick of it.

Yet, a few days later this case was again brought to my attention in the form of #MeToo that was seen on all forms of social networking. Everywhere, people were speaking out against sexual harassment, assault, and gender violence. And as I scrolled, I found myself wondering if this little moment on the Internet would actually change anything. How could a sad react ever systemically change a society based on a patriarchal system that many beneficiaries of the system fail to accept as the truth?

Just last week I was talking to a friend about one of his hookups, and in the middle of it, the girl decided that wasn’t what she wanted anymore. In recalling the situation, he was confused about why she apologized multiple times for changing her mind. And then it hit him–in a woman’s life no doesn’t always mean no; notably, at some elite institutions, there remains a question of whether no means yes and yes means anal. And while I was excited that he had finally hit this point of revelation, I could not help but be frustrated that his moment of revelation came at the age of 22, while this is something I have faced from the onset of puberty. My moment of exhaustion soon channeled into hope, as our conversation evolved into a discussion of “what can I do?”

So how exactly should we react to the recent phenomenon that is #MeToo? Here are just a few ideas that around 20 years of femininity has taught me:

#MeToo reflects a recent movement against the sexual violence that has a pervasive presence in each aspect of our society. Yet, in order for these posts to mean something, anything, we have to stop saying “I’m sorry” for our social norms and start changing our perspectives on hookups, dancing at Shooters, and the system that each of us on some level buys into. Yes, the sad reacts are a start, but without each of us changing our behavior, this online presence will dissipate and mean nothing. And it needs to mean something.