#MeToo and Pain Management: Is Race a Factor of Credibility? 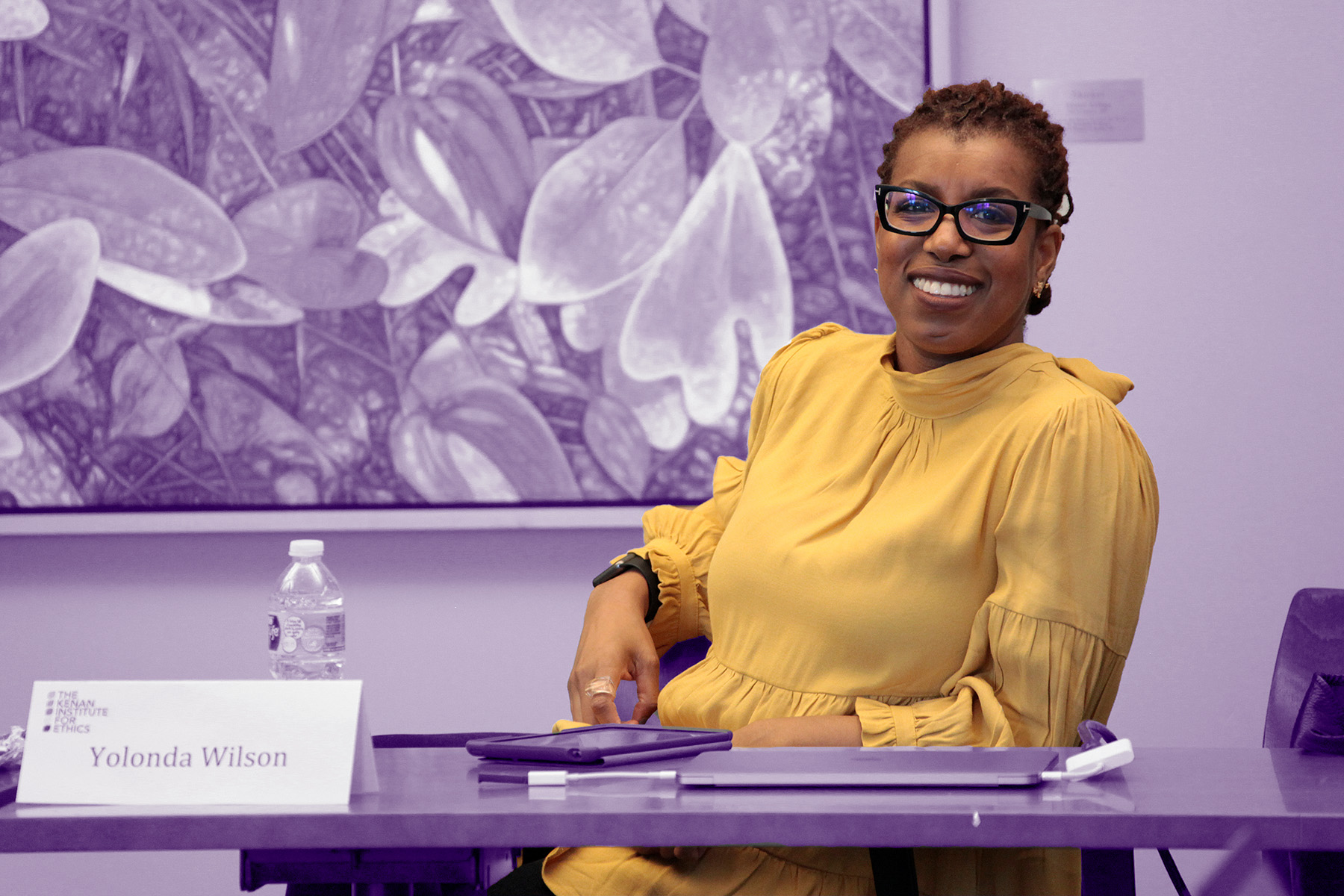 Last week, the Kenan Institute welcomed back Yolonda Wilson, a graduate of UNC-Chapel Hill’s Philosophy department and former Duke employee. Wilson began her visit by thanking Kenan faculty and Senior Fellows Wayne Norman, Charmaine Royal, and Walter Sinnott-Armstrong for showing her that it was possible to “do philosophy work while pursuing an interdisciplinary approach.” Wilson is currently Assistant Professor of Philosophy at Howard University in Washington, D.C. where she specializes in the intersections of bioethics, race, and feminism.

On Monday, Wilson spoke at the Kenan Graduate Fellows in Ethics seminar, sharing a working paper about race and the meaning of the #MeToo movement with Kenan Institute faculty fellows and graduate students. On Tuesday, she presented part of a project on the ethics of pain management and medical care involving black patients, which she will continue to develop over the 2019-20 academic year as a fellow in residence at the National Humanities Center in RTP. Her work not only attracted diverse intellectual constituencies at Kenan — attendees included directors of the Arete Initiative, the MADLab, and the Bass Connections team examining cheating and gaming — but also drew participants from the medical school, Global Health Institute, Department of Philosophy, and Department of Political Science.

Running through both discussions was the theme of epistemic credibility. In short, what factors contribute to the sobering data showing that black women are less likely to be believed than white women when reporting sexual assault, and black patients receive less effective pain treatment than white patients?

Wilson linked both disturbing trends to a combination of race-related social biases, often ingrained by childhood, on the part of law enforcement and medical professionals. She argues that the way in which contemporary American institutions have actively harmed or failed to protect black women is foreshadowed in 19th century medical practitioners’ treatment of enslaved black women. Prominent physicians such as J. Marion Simms (often referred to as the “father of modern gynecology”) developed surgical techniques by experimenting on black women who were legally unable to give consent. Viewed as “undesiring and undeserving” individuals, these women’s pain was of secondary importance to Simms’ quest to educate other doctors and transform surgical practice.

More recently, an Oklahoma City police officer, Daniel Holtzclaw, was convicted of multiple counts of sexual assault on black women whom he targeted on the basis of poverty, prior convictions, or drug use: characteristics which Holtzclaw thought would ensure any accusations would not be believed. Calling his eventual arrest and conviction “the exception that proves the rule,” Wilson pointed to white female celebrities’ silence regarding black sexual assault victims (notably in the evolving case of the musician, R. Kelly), and data showing that black victims are more likely to be arrested for fighting back against their assailants, as further evidence of a believability “gap” undermining the safety and well-being of black women.

Wilson’s second talk on pain management, race, and epistemic credibility delved into the reasons why black patients are less likely than white patients to receive appropriate pain management therapy. As with her earlier talk on the #MeToo movement, Wilson raised the issue of racial bias as a contributing factor to such therapeutic failures. Medical professionals were more likely to perceive black patients as potential drug abusers than white patients as well as rate their pain lower. Surprisingly, studies of medical professionals have shown persistence of the belief that black persons have naturally higher pain tolerance than white patients — despite the complete lack of biological evidence for such an assumption. The implications for a race-based bias for pain thresholds are mixed: on the one hand, such biases do not seem to stem from hostility, on the other, the perceived biological basis for such bias may make it more difficult to correct in health professionals.  More disturbingly, the belief that black people possess an inherently higher threshold for pain may increase white tolerance for police violence against blacks.

The question and answer period for both talks proved fruitful for continuing the intellectual questions under consideration. Neil Prose, a physician affiliated with Duke’s Global Health Institute, asked whether socioeconomic class should be considered in addition to race as an explanation for the biases Wilson mentioned. Farr Curlin, a palliative care physician and the director of the Kenan Institute’s Arete Initiative, encouraged Wilson to explore why black patients tend not to seek hospice care as often as whites.

Each year, the Kenan Institute for Ethics awards 10 to 15 fellowships to outstanding graduate students at Duke University.  Find out more information about the Kenan Graduate Fellows in Ethics.