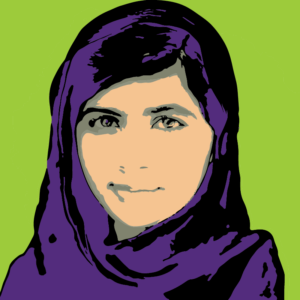 The most influential public figure throughout my young adulthood was an individual only a year older than myself: Malala Yousafzai. I was 13 when I first heard about Malala, before her platform developed its global presence of today. She fought for a girl’s right to an education despite the looming threat of the Taliban, who would destroy girls’ schools after taking over an area, forbid girls from attending school, and actively encourage women to not read or write. I remember watching her on the news as she was transported to a hospital in England in critical condition after being shot in the head by a member of the Taliban. In that now-famous picture of Malala in the hospital, the bed seemed to swallow her whole. She was just a little girl at the time, but I distinctly remember feeling her resolute strength within me.

Malala and her story have informed many aspects of my identity; I often feel as though I grew up alongside her. As she advocated for girls’ rights on a global platform, I did so on my own local stage. She brought awareness to girls’ illiteracy by speaking out against injustice, and I too advocated for change by promoting the efforts of a girls’ school in Pakistan that I worked closely with over the years. I remember the joy I felt when, in a speech about women’s illiteracy, I mentioned that Malala was the youngest person ever to win the Nobel Peace Prize. I felt as though I was a part of a bigger movement: the story of Malala allowed me to step outside of myself and place my identity within a larger social context.

Certainly, Malala was the impetus for my involvement in activism and girls’ literacy efforts. She was a veritable connection between myself and the inner workings of the world. However, more recently I have come to realize that her platform has been founded on principles of peace and tolerance that are uncontroversial and thereby have been easily adopted and manipulated by Westerners within the national and international sphere.

The fact that Malala is infantilized by Western media is no secret. Rosie Walters of the University of Bristol analyzed over 220 UK articles to identify the dominant discourses about Malala. She noted that Malala is infantilized by Western media, which frequently emphasizes her youth and utilizes a paternalistic tone: “She is labeled a girl 143 times, a schoolgirl 185 times, a teenager 116 times, a small girl and even a little girl on five occasions, while she is called a young woman just 23 times and a woman only once,” despite being between 15 and 18 years old at the time these articles were written.

Many articles also place her in a passive role, subject to the “paternalistic caring” of Great Britain. Walters notes, “When analyzed to see whether they presented Yousafzai in an active (doing and deciding things) or passive (having things done or decided for or against her) role, just 69 of 211 constructions were indeed active, with the tabloids in particular preferring headlines such as ‘Double op success for shot girl Malala’.”

Why is Malala co-opted so readily? Considering that women in Western countries face few barriers specifically in regards to education, some say that celebrating and supporting the efforts of Malala is oft-times an exercise in curing the “backwardness” of third-world countries while failing to look within and consider how one’s own country may have contributed to this “backwardness” in the first place. Journalist Assed Baig of Dawn criticized her reception in the West, stating that she is used as “a candidate for the white man to relieve his burden and save the native.” Though such attacks fail to acknowledge the homegrown nature of her activism, they underscore the uncontroversial nature of the image curated for her by the West. Malala’s popularity makes sense: her central message seeks empowerment that is unsullied by issues of confrontation with Western international politics, making it easily adoptable. Thus, it makes sense that when Malala is political, as in 2014 when she asserted that “drone strikes fuel terrorism,” her assertions are glossed over or ignored.

The co-option of Malala is contradictory not only with respect to international politics but also in regards to American internal politics. We celebrate her efforts to increase girls’ literacy but fail to acknowledge her strong adherence to the Muslim faith. Malala distinctly identifies as Muslim, but few interviews address this component of her identity. In a sense, we secularize her to fit our own agenda, permitting us to remain in blissful ignorance. Malala herself has promoted a false narrative that the West is open minded about its Muslim brethren and devoted to peace: “In countries other than Pakistan—I won’t necessarily call them ‘Western’—people support me,” she noted in an interview with The Atlantic. “This is because people there respect others. They don’t do this because I am a Pashtun or a Punjabi, a Pakistani, or an Iranian, they do it because of one’s words and character. This is why I am being respected and supported there.”

Nevertheless, our Islamophobia––which is inherently linked to our views on overwhelmingly Muslim groups like the Pashtuns, Punjabis, Pakistanis, and Iranians––remains: the antagonistic American context continues to pit Islam and the West against one another in a “clash of civilizations.” 39% of Americans believe that Islam and the West are incompatible with one another, and US policy has historically reinforced this narrative and emphasized the importance of choosing to be wholly American at the expense of one’s Muslim identity. The Countering Violent Extremism (CVE) Program, first instituted under the Obama administration, relied on “insiders” in the Muslim-American community and conflated extremism with religiosity, presenting “good” Muslims as those who were the most moderate and integrated into American culture.

Simply put, Malala herself has inspired me, but her treatment and manipulation by the West has led me to assess how the packaging of pleas for change ultimately affects their success. I see the example of Malala as evidence of how messages based in “peace” and “unity” stunt growth by preventing us from looking within. They are easily manipulable and easily adoptable. Her example poses the ethical question: how do we format activist stances so that they are wholly and accurately heard, especially when such points of view are posited by marginalized people? What language, and terms, can we use in these forms of communication? How does packaging affect the adoption of such messages?