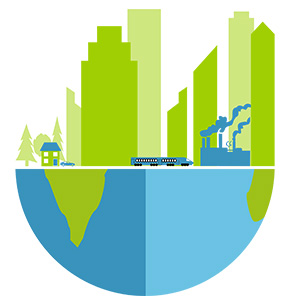 Speaking to a room of Kenan faculty, staff, and students, Chelsea Clifford paused and asked everyone present to draw a river. Using the drawings as examples, she talked about different ways of representing rivers: birds’ eye views, cross sections, the standard way of drawing a river in biology, rivers as sublime scenes of wonder. Her point was not first and foremost that people imagine rivers differently, but that how we imagine rivers, and what we expect them to do for us, influences what rivers look like. For example, the idea of the “beautiful curve,” the curve considered to be most aesthetically pleasing, plays at important role in river restoration; rivers are now planned to conform to the beautiful curve. She also pointed out that though few people had added it to their drawings, most present-day rivers are a series of lakes – it is very rare to find a river that is not dammed. Human use of river waters, be they practical or aesthetic, determines to a large extent what rivers look like, and in turn what we envision as a typical river.

Chelsea is one of five graduate fellows who received summer funding from the Luce Anthropocene project at the Kenan Institute for Ethics. On Thursday last week, each fellow presented their work. In their talks, the fellows all addressed questions related to the issue Chelsea raised – how human ideas and behaviors interact with, shape, and are shaped by the environment. Brett Stonecipher spoke of working at the Duke Campus Farm, and the ways in which hands-on labor, combined with archival research, shaped a prose piece he is working on. Using personal knowledge of the land, archival letters, receipts, and fragments, and imagination (what could have happened?), Brett sought to narrate life on the farm through its long history, focusing especially on the past experiences of enslaved peoples. Sally Bornbusch introduced her research on antibiotic resistance in lemurs. We know a lot, she said, about antibiotic resistance in humans, and we know a little about how domestic animals develop antibiotic resistance. What we do not know is if wild animals are able to pick up resistance from their environment, simply by being exposed to anthropogenic disturbances such as farm runoff, sewage, and other pollutants. Her initial research suggests that this is indeed possible; animals that do not necessarily come into direct contact with humans are still affected by our antibiotic use. Jieun Cho worked with the Bamboo Lab in Japan, which helps mothers evaluate how much radiation their children are exposed to. She focused particularly on the relationship between engineer experts and parents in assessing radiation and making life-style changes to limit the health risks for children. This often puts experts and parents in difficult positions, she said, since engineers have to ask sensitive question about family habits that put the health of children in danger, while parents are trying to maintain agency in their child rearing. Much of the lab’s work, said one of the engineers she interviewed, is about waiting. Waiting for results, waiting to build sufficient trust with parents, waiting to see how radiation distributes itself in the environment and in the bodies of children. Finally, Ryan Juskus reported on his fieldwork in Birmingham, Alabama, where local residents and organizations are combatting the intentional suppression of data about the adverse health effects from living close to coal plants. Ryan noticed that most research focuses either on environmental factors – pollution, the science of coal dust exposure, water contamination – or on societal factors – income inequality, race, power disparities between large corporations and local communities. But what he found when he attended town hall meetings is that religion and spirituality plays a significant part of in how local residents narrate their experiences. Ryan’s goal, in response, is to explore how questions of environment and society change if spirituality is also taken into account. Is spirituality simply how Birmingham residents frame all their experiences, or do their religious language and belief contribute a new perspective on the relationship between nature and society?

The aim of the Luce Fellowships is to support student work that broadly connects to Anthropocene themes. The term Anthropocene describes the current era, in which humans have become a major geological force, affecting atmosphere, oceans, soil ecology, biological diversity, and climate. The fellow presentations displayed the rich possibilities of thinking of human society and nature not as distinct spheres or ideas, but as mutually constituted and constantly interacting parts of life. Each fellow drew on the methods and questions of their particular fields; together they contributed a multi-faceted and interdisciplinary look at the ways in which human, animal, and planetary pasts and futures depend on each other.