In opposition to last week, I spent most of the last seven days in relative solitude. The interns have left, 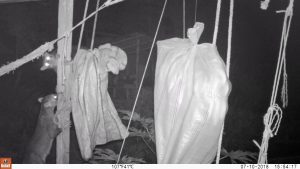 advisor moved on to a project in Brazil, and the hired cook doesn’t come in for a party of one. After fulfilling discussions about environmental ethics and challenging myself with differing ideas, I now only have myself to banter with. Holding down the fort alone has some benefits. With the presence of a lot of people at the bamboo house, the animals had kept a wary distance. But alone I have stumbled across an armadillo in the forest, a huge bicolored weasel called a tyra in the garden, and I squared off with capuchin monkeys when I walked under their tree. But now rats, mice, raccoons, pigs, and dogs have also gotten bolder and are slowly advancing on the bananas in the kitchen. There are traps at JCR to catch and kill the small rodents that get inside the bamboo house. We’ve been chasing away the raccoons and dogs with pots and pans. There is a general warrant to kill any of pigs that wander into the reserve from the neighboring community. But I’m here to research and conserve wildlife, so why am I thinking about killing animals?

This made me wonder: what makes it okay to take the life of another animal? Is it when it becomes a pest or an invasive species? When it is food? Is it always okay because we are people and they are not? I am interested in how people have greater objections to killing some animals over others. Why is that? The interns and I set out traps for the mice and rats that wander into the kitchen without thinking twice. I’m used to considering these kinds of small rodents as pests that you trap or poison to eradicate. Yet, here these are native species of rats and mice that live in the surrounding cloud forest. The rodents were here before the bamboo house was built. And if I saw a capybara (a dog-sized rodent) walk into the house, I would be snapping photographs and gleefully observing it instead of running at it with a machete. Nobody suggested killing the raccoons even though they are equally a problem in the kitchen, but we do trap and release them or scare them with loud noises. I am also confident any of the interns would have objected to any kind of maltreatment towards the dogs that occasionally wander over.

So when is it morally permissible to kill an animal?

To answer this, I started big. It is never okay to kill a human being for being a pest or a source of food, so the fact that we are accustomed to the concept of killing animals (in general) indicates to me a sub-human classification. Granted, some cultures and religions discourage killing animals (or perhaps only certain species), but broadly speaking the concept of killing animals is acceptable. At the same time some animals are deemed better than others. Most people don’t have a problem chowing down on chicken wings, but no one wants to eat their neighbor’s pet. Similarly, over fifty rats have fallen to the traps we set up every night, but not one of us has killed a dog or a pig. Is it because they are too intelligent? Are they too cute? We grow attached to dogs and cats and horses, but why not cows or chickens? It makes sense that animals compatible with domestication and companionship become our food and friends. The proximity with these animals allows us to see their individuality and characteristics, and in this understanding we feel connected to them. It’s harder to harm or kill an animal that we have grown close to or developed an appreciation for. The further removed the animal is from our homes and hearts, the easier it is to feel okay killing them.

So does that make that okay? The argument that animals killing other animals for survival as part of the “circle of life” doesn’t apply very well to people. Humans are more than capable of growing non-animal food sources. Additionally, humans have long been harming other species to a degree where the animals are disappearing – going permanently extinct. There is no balance with the killing of animals as people explode in number and encroach further and further on natural environments, destroying flora and fauna along the way the way there is in nature. So are people special because of their intelligence? Their innovation? Their ability to feel emotion and weave stories and built skyscrapers and make art? Animals to varying degrees can feel pain and joy, teach their young and tell narratives, build monumental nests or structures, even make beautiful artistic displays. So why is it immoral to kill a person but we can kill an animal? I can’t justify why.

However, thinking of animals as invasive species is another case. Humans are responsible for the introduction of plant and animal species from foreign places. Invasive species often multiply in the absence of natural predators and take over ecosystems in detrimental ways. They then destroy natural habitats and put stress on native populations. Here, combating nonnative species through hunting (and sometimes eating) them makes sense. Imbalance in the food chain due to human activity has already called for population control interference, such as deer hunting in North Carolina in the absence of apex predators.

As a final thought, I found it interesting how proximity to an animal correlated to the amount of guilt or hesitation about killing. Before I ever set a trap myself, I knew the interns had been catching and killing rats most nights. This didn’t bother me; in fact, it seemed reasonable. But once I set a trap and then removed the dead body of a large rat the next day, I couldn’t help but observe its soft fur, little black eyes, and tiny feet of the animal. I felt sad that it was dead and a little upset that I was responsible. When a pig wandered into the kitchen and started ripping up bags and tipping boxes, I knew there was no way that I could hurt it. The pig looked at me and wasn’t scared. Killing an animal with my own hands was out of the question. Yet, the pig was responsible for destroying vegetation and riverbank habitat as well as contaminating water sources, so given a humanitarian way of exterminating it, I would not be opposed. People introduced this problem and have a responsibility to resolve it. The terrible reality of is that animal lives are lost in the wake of these mistakes. 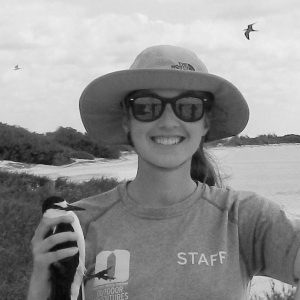