Home, sweet jungle home! The past few days were so packed that the return to Jama-Coaque feels like a return to calm and center. After leaving the La Mesenia Reserve, I accompanied my project advisor to the inauguration of the Cloud Forest Alliance in Cali, Colombia. My lab mate Ruben Palacio (who has both challenged and guided my research in the past) helped orchestrate this common-goal pact. The CloudForest Alliance is intended to connect and support different conservation groups of the greater Cali area. After the inauguration, I visited the San Antonio Bosque near Cali to run my cameras. For being so involved with birds, it wasn’t until a few days ago that I went on my first birdwatching tour! We saw an Andean Cock-of-the-Rock, which is quite an exquisite bird to see. I even had the pleasure of experiencing vibrant Cali life (with many thoughts on machismo, gender roles, ethnic relationships, culture differences, and Colombian politics for another day) before returning to the quiet and relative solitude of Jama-Coaque. 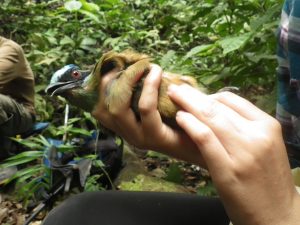 Not only did this week give me cultural exposure I’ve been looking for but traveling around also made me realize that some of the most valuable resources I had around me are the people. Thus far, I’ve spent most of my time searching for original ideas and conclusions from my own thoughts. I take my research experiences and privately reflect upon them, thinking about the ethics involved. What I learned from the packed past few days is that I can absorb a concentrated amount of information about different conservation ideas, environmental-political involvement, and culture simply from talking to people. I met people involved in different levels of eco-tourism and conservation organizations with diverse values and agendas. I gained valuable insight and, perhaps most importantly, had transformational discussions that stimulated some of my greatest thoughts.

Upon my return to JCR, I decided to tap into the human wealth of knowledge: the bird banding interns. I almost immediately regretted my decision to try and connect with the interns. They get up at 4:30am. At an hour where only the raccoons looking for the bananas in our kitchen are awake, we eat breakfast by candlelight and file into the jungle by headlamp. The interns and I hike for an hour and a half, arriving at the mountain top right at dawn to set up the banding station and open the mist nets. At timed intervals, the interns check the mist nests for captures and bring back the birds in bags to be banded, measured, weighed, aged, sexed, and assessed for health at the station. The interns work efficiently and calmly, they are serious about their work. I’ve never seen a banding operation like this. There are no injuries or deaths, and the birds experience minimal stress. My involvement with the whole process is purely observational: I follow the interns in their duties. And I ask a lot of questions.

Between mist net checks and measuring, there are little gaps of time to fill with chatter. The interns, their instructors, and I exchanged birding stories. I’ve had experience capturing and banding birds, and until talking to this group, I had assumed it was in a professionally and scientifically sound way. The interns found the description of my banding experience to be thoroughly objectionable, something that surprised me in the worst way. Interestingly, we quickly discovered that there were different ethical standards amongst ourselves, but there were many viewpoints that we held as common ground.

Here is one thing I learned from the interns: Among the birding community, it is joked that it can take longer to get your bird banding license than a pilot’s license. Europe has the most stringent application, training, and qualification process, followed by the United States. Licensing is critical for ensuring that animals are handled with the upmost care and human impact is reduced to a minimum – and there is a lot to know! The internship program at Jama-Coaque follows more stringent rules, despite Ecuador (like many other developing and near-developed countries) not holding these standards. I found out that people flock to countries like Ecuador precisely for that loophole. Largely unqualified people operate bird banding efforts without being licensed. Unlicensed bird banders even teach others and start their own businesses here. These “easier” bird banding experiences then compete with operations such as the one at JCR, where interns learn about bird handling and banding very carefully. It had never occurred to me that so many technically legal but definitely unethical companies were in operation – and I may have participated in one of them!

By the end of our conversation, I was appalled by the stories the interns shared with me (including some very extreme tales of blood extraction methods causing bird fatalities and aggressive handling injuring small birds) and they were equally horrified by the stories of my own (now understood) unethical banding experience. The interns at JCR are all passionate and devoted bird lovers. Some of them have ambitions to make careers out of avian banding and research, and their love for birds keeps their actions limited and maximally safe for all lives involved. We discussed why the unethical treatment of avian research still exists, and what can be done about it.

While the interns and I ended our conversations in sighs about the way the world is today, we did find some hope. The interest in the birds of Colombia and Ecuador is driven largely my external interests from bird enthusiasts and nature lovers. For those of us who travel from countries like the United States to ecological reserves such as this, we must travel with the best standards. Fostering an appreciation for wildlife is the first step. This can begin by teaching environmental ethics when children and to visitors who interact with nature. It should be explained why restrictive laws exist for the protection and wellbeing of amazing biodiversity. Then teaching the ethical standards of behavior around wildlife is next. How do you do the least harm and show your appreciation to the wild? Then, people must be educated about how businesses are using loopholes in governance to act unethically to generate outcry over these infractions. Unfortunately, even if most people felt and behaved like the interns and I, unethical businesses exploiting and commercializing nature would still occur where the opportunity exists. Therefore, the final step would be to change the national laws to reflect the highest standards. But before people and politicians can be convinced to operate on the highest ethical code, it all goes back to teaching and fostering appreciation. 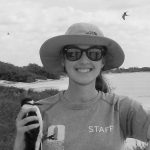