The last few days have been spent spreading awareness for the two metabolic diseases that run rampant in this part of the world: diabetes and hypertension. I was so happy to see at least a general awareness that these diseases are common, exemplified when the women I was talking to started off with ‘Hamain tau batayen hum kya karain sugar aur bp kay baaray may’ (please tell us what we can do about diabetes and hypertension). Recognizing that diabetes and hypertension are a hinderance to everyday activities is, in my opinion, the first and most important step needed for these women to actually play an active role to control their health, which is a big step forward as compared to two months ago, at the medical health camp, when most of the community members didn’t even want to address the issue. I guess the mere act of letting them know at the camp that their troubles are caused by these two things, was enough for them to want to tackle it on their own. 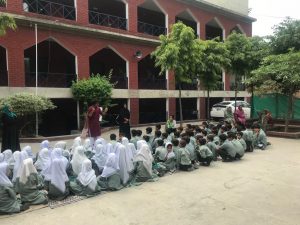 I was also very impressed with the amount that these women trusted me. I didn’t expect for them to open up to me as quickly as they did, and I feel like part of that had to do with the fact that I made it very clear from the get-go that if they wanted to improve their situation, it had to come from them. As soon as I floated the idea of regular and consistent exercise, they began to ask me and show me different stretches that they knew about to see if they ‘counted’ as exercise. The feeling of engaging with these women in a workshop that would impact them positively was very invigorating, and one that I knew I wanted to feel again by scaling up the project.

Even before they left the room to leave for home, I could feel the positive impact it had on them. They were, for one, smiling bigger, and their eyes reflected a new-found hope and optimism for the abysmal physical and social conditions they lived in. It made me wonder how much more could be achieved if people came in regularly to simply just talk to these women about their lives, and things they could do themselves to better them. It is maybe that same wonder that encouraged me to talk to a local nurse in the region about conducting monthly sessions with these women to talk about self- care and preventive medicine when I wasn’t there.

One woman came up to me and narrated her experience about her ill father in law who suffered from tuberculosis but refused to see a doctor. She told me that her husband had died some time ago, and there was nothing she could do to force her in law to go to the doctor because it would be deemed as disrespectful. In the conditions of this slum neighborhood, patriarchy prevailed, and the social norm was to just go with the situation and accept it. She was worried about her kids as she realized that they could also be infected, and although there was nothing I could say her except to persist, the idea of her opening up to a complete stranger like me and allowing me to share in her concern and grief showed me that this community was willing to invest in change and self-betterment.

In addition to sessions with the mothers, we also held sessions with students at the School of Sciences where the workshops were being conducted. Students, especially the younger ones, always went home and told their parents what they learnt in school, and so this would provide reinforcement of the methods we talked about with the mothers. Obviously, it wasn’t in as much detail, but they seemed very excited about the new information that they were learning and were participating actively in the discussion. A few students even came up to me and made a pinky promise that they would go home and tell their moms, which made me smile a lot.

Phase 2, in my opinion, was a success and I can really see a scaled-up version of this project being implemented in neighboring communities. I do wish to continue this every time I’m back in Pakistan, and to assign someone to carry on these sessions even in my absence. These two months have convinced me that preventive medicine has a really wide scope in Pakistan, and Is the best possible method to help low income communities take matters into their own hands. It is also a means of empowering these women, and better health outcomes that are spurred by their own initiative will go a long way in increasing their self-esteem and convincing them that their social conditions don’t define them. I end Phase 2 of this project with a whole lot of optimism and hope for a future where global health equality can be made a reality if there is a hard enough push towards it. 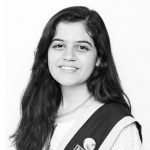