Around the world, environmental journalism tends to be a neglected beat compared to the rest of the media landscape. But stories on the environment are investigations into our most pressing and important issues that serve as both reflections of our history and culture and evidence of our values and politics. If we don’t have healthy environments that sustain our livelihoods, we have nothing.

What I love about the environmental beat is that it forces journalists to encompass science, policy, corruption, systemic inequities, colonialism and exploitation in their reporting. Not much of environmental reporting would make sense without looking into the current and historical forces that have led to the story in the first place. As an environmental reporter, you look at a landscape and witness the changes to physical space, physiological conditions, community wellbeing, ecological connections and cultural evolution brought on by or driving changes to the environment.

Learning in a pandemic

In my sophomore year at Duke University in fall of 2018, I somehow knew that I wanted to intern for an environmentally-focused investigative media outlet and Oxpeckers was the perfect fit. Summer of 2019 was spent in Durban, South Africa where I had the opportunity to immerse and learn about how the government, oil and gas companies and communities were grappling with fracking exploration in the region.

Even though summer of 2020 hasn’t allowed the same kind of in person interactions that taught me about environmental advocacy and policy in South Africa, I have created an independent study course through my university for the summer called “Environmental Journalism and COVID-19.” In reading the “Routledge Handbook of Environmental Journalism” as my course textbook, I’ve gotten to both reflect and build upon my experiences last summer in KwaZulu-Natal and this summer in Ohio and Colorado where fracking has boomed in the past decade.

The flow of environmental journalism

“The myth that no real environmental movement or journalism existed in the developing world… as if environmentalism and reporting on the environment were the exclusive preoccupations of the wealthy,” writes chapter three of the handbook.

“The idea of protecting nature and public health had deep roots in Asian, African and Latin American religious and cultural traditions,” chapter three of the handbook says. “Many preceded the North American and European reform movements for environmental protection.”

The legacy of colonialism, exploitation and racism around the world is scarred into the land of where resources and wealth have been taken from the lands of the vulnerable to far-away pockets of power and privilege. A driving force behind this South to North exploitation of resources is the media itself.

After WWII, dominance of US, British, French and Russian wire services meant that a globalized world had a “structural imbalance in global information systems” (chapter three). The handbook highlights how news always moves from North to South, but there must be an increase of news flowing South to South and South to North. Not only does this empower voices in the South that have been largely ignored, but this also brings valuable, creative and innovative ideas from South to North.

The value of examples from lesser known parts of the world

“In other countries journalists have struggled simply to bring their stories out to the rest of the world,” the handbook says.

One story that I think would be greatly beneficial for Western and westernized nations to learn from is traditional clothing in Bhutan. I interviewed dozens of Bhutanese people about their ghos and kiras—the Bhutanese dress. Although western consumption inevitably is taking hold in the small kingdom, the country mandates the gho and kira during business hours and in schools. Different residents had all kinds of history, mythology and family stories to share about their clothing.

Most of the people I talked to had less than 10 sets of ghos and kiras, and that’s mostly all they wore. Even farmers who had little money would have ghos or kiras priced in the thousands of dollars because they only have a few handwoven sets that last a lifetime and most people had a weaver in the family.

Instead of outsourcing clothing production to pollute and harm people in vulnerable regions of the world, traditional Bhutanese clothing was made in the backyard with vegetable dyes and months of intricate weaving.

This tells a story of knowing the meaning of your consumption and knowing all the labor and resources that go into it—finding true value in yours and others’ livelihoods. 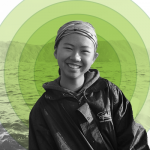