Leaving a Space for Discussion 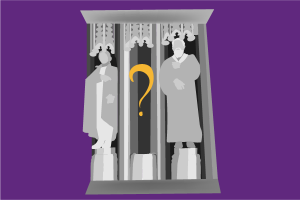 A new school year begins, and another commision has been established at Duke. This commission, though, is perhaps the most visible in Duke history: they are charged with making recommendations for Robert E. Lee’s replacement on the Duke Chapel, along with establishing procedures regarding the “appropriateness of a memorial or the naming of a facility on campus.” There has already been one letter to the editor in the Chronicle suggesting changes for all three of the Southern figures represented, highlighting the hypocrisy in leaving Jefferson and Lanier standing. Although Duke University must acknowledge the racism present in the remaining Southern figures, the issue of Lee’s replacement is more pressing at the moment.

Perhaps the Duke community is asking the wrong question. Instead of wondering who should fill the void, why not leave the void? Filling the hole offers a rare opportunity to deify a figure, no doubt. But the Duke administration benefits from this remediation tactic more than anyone else: eventually they can pretend like Robert E. Lee was never there.

If Duke adds a new member to the Chapel, in many years—once this episode no longer occupies the forefront of Duke’s collective memory—we will no longer have to answer the question: “why is there a void in the Chapel entrance?” Racism will still exist at Duke, but we will no longer have to confront, and confess, the racist history and present of the institution on a daily basis. Instead, Duke will once again sweep something under the rug, careful to have controlled the situation effectively and not blemish the school’s reputation.

Duke has had many previous opportunities to honor figures in University history. The Abele Committee, for example, recommended a statue of Julian Abele be placed in the West Campus traffic circle, but instead the Board of Trustees renamed the main quadrangle after Abele. On the quad, the plaque simply reads, “if you seek his monument, look around.” Duke had to opportunity to build a monument, but chose rather to point to the buildings–built solely for Duke’s benefit, which Julian Abele was never even allowed to see.

To claim that Duke [as an administration] cares about the well-being of disenfranchised groups on campus is to ignore institutional history. As we saw with the Graduate Student Union, the fight for 15 until very recently, and the continued investment in merit scholarships, Duke’s stated values and actions do not align. If Duke is going to maintain accountability for the racism this school was founded—and perpetuated—on then there should not be a new figure on the Chapel in a year’s time. Instead, there should be a hole. A hole Duke has to own up to, and a history Duke has to acknowledge and continually work to rectify.

While the hole on the Chapel may be a chance for Duke to build a real monument of a deserving figure, we must consider the history of the University when deciding on a replacement. Perhaps it would be more productive for Duke to leave an opening for conversation into the future rather than creating the environment of least resistance for the University.