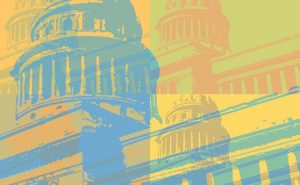 The panel began with a brief history of the regulatory framework set up after World War II and the Bretton Woods Accords which set out a global, rule-based, economic framework designed to replace the nationalistic policies of the pre-war period.  By the 1990s and 2000s, this framework supported the negotiation of multilateral trade pacts such as the North America Free Trade Agreement, the Trans-Pacific Partnership and Transatlantic Trade and Investment Partnership, all of which sought further reductions in tariffs, foreign investment promotion and international regulatory cooperation.  The panelists agreed that the net effect of this rule-based system has been to limit trade conflict overall.

The 2016 elections called into question the post-war consensus about multilateral trade agreements and institutions.  After a period of “chaos and lurching” in the early days of the Trump administration, panelists agreed that the new U.S. trade negotiation strategy that emerged is a transactional model inspired by presidential advisors with business experience and echoing nationalist themes.  They argued that the president’s political calculus for such policy changes involved bringing jobs back to the states that voted for Mr. Trump and which have a generational history of communities working for the automotive, steel, and aluminum smelting industries, among others.

Trade tensions between the U.S. and foreign countries have increased since President Trump began using bilateral trade data as a key metric for evaluating trade between the U.S. and the world.  One panelist talked of how previous U.S. administrations dealt with the rise of China as “a mercantilist, statist power” by inviting it to join organizations like the WTO where trade disputes are settled using rule of law.  Another panelist echoed the sentiment that U.S. incentives to integrate China into the global economy had utilitarian benefits in that this strategy lowered trade tensions for a time.

Panelists assessed the impacts of the Trump administration’s tariffs and other trade strategies to date, pointing out that much of the world still views multilateral trade agreements as a necessity.  While the United States (and its ally, Great Britain) are in the process of withdrawing from multilateral trade frameworks, many countries have continued to pursue what they believe will result in the greatest good for the greatest number of people through such agreements.