Keep Sports Out of Politics 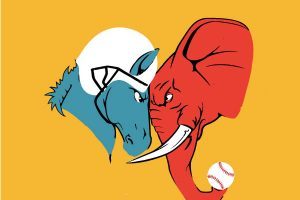 “Keep politics out of sports” is one of the most common battle cries for those who disapprove of Colin Kaepernick’s style of protest. It’s an honest request; if Americans flock to sports in part to escape politics, displays of protest undeniably sully the viewing experience. But while white NFL fans have been distracted by the encroachment of politics into sport, they’ve failed to notice a far more detrimental development: the encroachment of sports into politics.

Sports has always modeled ideological battles, especially on the international stage. But now, on the domestic level, Trump’s bravado-politics are making the converse true: The spectacle of and accent of American political discourse increasingly resembles that of sports. And if anyone is blurring the lines, it’s not Colin Kaepernick. It’s Donald Trump.

Think about it. We have a president who takes every opportunity to brag about last year’s championship victory, who won’t stop trash-talking our opponents, and whose team is currently being investigated for potential performance-enhancing violations. We have a president who extols his health and stamina, who commands and chiefs from the golf course, and who promises “so much winning you’ll be sick of it.”

In all seriousness, the last quote is vital. Trump’s obsession with victory elucidates the toxic mindset of his modus operandi. When Trump measures complex debates in terms of “winning” and “losing,” he reveals his approach to politics as a zero-sum game. To him, effective administration is based not in utility and compromise, but the domination of one’s opponents. Governance is not an exercise in cooperation, but competition. Trump’s machismo guise and arrogant demeanor stem from this pretense that all things are contests.

The mindset has diffused into the collective psyche. Studies show that Americans are more polarized than ever—not just along party lines, but for specific issues, including the Kaepernick controversy. There’s the circular nature of the ordeal: White fans who boycott the NFL for the intrusion of politics into sports are themselves contributing to the transformation of American political discourse into a competitive spectacle—a game where factions resolve to either win or refuse to play.

Of course, white NFL fans do not see the irony. They wouldn’t; the ability to “escape” from politics is a form of privilege in and of itself. White America can turn off the television on Sunday. Black America can’t turn off police brutality on any day of the week. The 66% of people of color in the who worry about the resurgence of racism in America don’t shed their race when they watch a football game. Michael Bennet’s recent encounter with Las Vegas police shows that even the strongest and fastest black athletes cannot out run their blackness.

So if you truly want to separate sports and politics, start at the source. Reject the Trumpian brand of discourse that frames nuanced issues as matches between competing sides. Embrace a constructive politics that seeks to understand the opposition rather than defeat the opponent. Rather than insulate yourself by boycotting players you disagree with, explore their perspectives with the openness and thoughtfulness that complex situations require. You might find that some make sense.