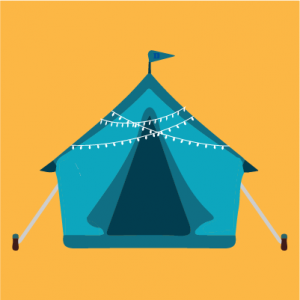 This past January and early February, Cameron Crazies fought furiously to claim their tenting spot and to brave out the disruptive post-midnight tent checks in KVille for the Duke vs. UNC men’s basketball game. (In case you didn’t keep up with that drama: http://www.diddukewin.com/). The tenting experience is one that’s touted as one of those things you need to cross off your Duke To-Do list (right behind, you know, getting a degree, etc.)

I didn’t tent this year because I knew I couldn’t handle tenting with all of the other things going on (Orgo I, SLG rush, etc.) However, my roommate, who did tent, told me how one of her friends, who didn’t tent, barged into her tent once and rambled about how they were all homeless people.

This isn’t an isolated incident. I’ve heard of many people who comment on how they “feel homeless” all because they set up a tent outside, had to sleep there, and were woken up periodically. (On a slightly related tangent, the night before the big game, Coach K stood in front of the Crazies and commented on how the walk-up line resembled a refugee camp.) The audacity of these people who claim homelessness is really impressive, considering the recent New York Times interactive infographic that charted class/income statistics among elite/Ivy League universities, including Duke. All of the students voluntarily chose to forego their existing and paid-for housing options, which they all return to once their shifts are done. If the weather conditions become too rough to bear, they’re given grace period for tent checks (in non-Duke language, it means that the K-Ville rules for tenting are temporarily lifted so that students can go back to their dorms without fear that they’ll be given a mandatory tent check that decides their spot.) Nearby, there are showers and bathrooms in Wilson Gym to clean up for classes.

Meanwhile in Durham, homelessness reached an all-time high last year of more than 800. In one night of January 2015 in America, there were 564,708 homeless people. A different site states a maximum statistics that in any given year, there are as many as 3.5 million people homeless (that’s approximately 1% of the entire U.S. population.) Large percentages of the homeless population are children, African-American, veterans, and/or mentally disabled. Being homeless means health, safety, food, and wealth insecurity. Many of these people are invisible to, walked past by, and ignored by the mainstream population. When homeless people are visible, it’s usually to the eyes of the police who aggressively target urban vagrancy. A dire example is Skid Row, a 54 block area in downtown Los Angeles that holds the largest concentration of homeless people in the United States and is heavily hyperpoliced. There’s no home, physically and emotionally, to refer to and connect to for them.

Given the gravity and complexity of the problem, the abrasive insensitivity speaks volumes about the distance, ignorance, and superficiality that many Duke students hold as they construct jokes about homelessness and temporary identities as “homeless people” that they can throw away when they return to their housing option.