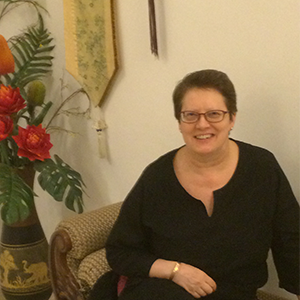 Juliette Duara is a Senior Fellow at the Kenan Institute for Ethics and a Senior Lecturing Fellow at Duke Law School. She has a forthcoming book, Gender Justice and Proportionality in India: Comparative Perspectives. Prior to coming to Duke in 2016, she was completed a Ph.D. program in the Faculty of Law at the National University of Singapore. A career as a partner in the Chicago law firm of Bell, Boyd and Lloyd preceded her venture into academe. Professor Duara currently teaches Sexuality and the Law at Duke Law School and in the spring will be teaching an undergraduate version of this course for the Gender, Sexuality and Feminist Studies Program, as well as co-teaching the Business and Human Rights Advocacy Lab at The Kenan Institute for Ethics. In this interview, Professor Duara answers questions about her personal background and the evolution of her research interests and career. DHRC at KIE Project Director Suzanne Katzenstein conducted this interview electronically.

Juliette Duara: Most of my early years were spent growing up in various parts of Montana – early elementary in Great Falls, late elementary at Flathead Lake and high school in Libby. But a critical 3.5 middle school years were spent in Northern Virginia, just outside of Washington, D.C. During those years my interest in social and political issues deepened so that when I returned with my family to Libby, Montana I sought ways to further those interests in what I perceived then as a more remote and isolated environment.

SK: How did you become interested in international human rights generally and in women’s rights and India more specifically? Did you work on other issues before focusing India and gender rights? What explains the evolution of your interests?

JD: One of the ways in which I sought to stay connected with the larger world after the return to Montana was to become involved in AFS Intercultural Programs USA, a high school exchange program. When I was a junior in high school my family hosted an exchange student, Mlungisi Kwini, from South Africa. Through him we learned much about the effects of apartheid. Then I applied to go on an exchange through AFS. I was placed with a wonderful family, the Nairs, who lived in what was then Bombay (now Mumbai). Although I was only there for a summer, the experience revealed to me that the world held a greater range of cultural, sociological, political, religious and economic diversity than I had ever imagined. I was so captivated as well as challenged by this experience that I vowed to return to develop a deeper understanding of Indian culture and society. This I did my junior year of college through the University of Wisconsin, Madison’s College Year in India Program. Because my original host family had been from Kerala in southern India, I sought to go south. Although the Wisconsin program didn’t go to Kerala, it did have an active program in a neighboring state, Tamil Nadu, where I spent a year studying the Tamil Language and pursuing a research project on Tamil politics.

After my year in Madurai, Tamil Nadu, I returned to complete my BA at Whitman College in Washington State, the college from which I had taken a one-year leave of absence to attend the Wisconsin program. At that time China was just opening up and Whitman was starting a China exchange program. In keeping with the kind of linear modernization theory prevalent at that time, I thought I would compare India and China from a developmental perspective. I applied and was accepted into the first year of Whitman’s China program through which I lived in Kunming for a year teaching English at Yunnan University. China was still emerging from the effects of the Cultural Revolution; most people still wore their blue uniforms – it was in many respects a more regimented society than India.

I went from Kunming directly into the East Asian Studies MA Program at Stanford, completing the degree in 1985. Although I seemed to be on an academic track, I was not then prepared to commit to the academy. Much life happened between the completion of my MA and my successful defense of my Ph.D. at the National University of Singapore (NUS) in 2015. I met and married my husband, Prasenjit Duara, we adopted our daughter, Nisha, I got a JD from the University of Chicago and practiced law for many years, focusing primarily on succession and wealth management. It was only when Prasenjit was considering NUS’s offer for him to serve as Director of the Asia Research Institute that I saw the opportunity to bring together my interests in law and society in Asia. My background in succession law led me to start my investigation there. This focus quickly led me to discover that succession or inheritance law as an aspect of property law was the terrain on which many fierce battles for women’s rights had been – and are being – fought in many societies, Indian and Chinese among them.

SK: What is the central argument of your book?

JD: My book is about the adjudication of the right to sex/gender equality in India. The express thesis of my book is that the Indian judiciary should adopt – or at least should seriously consider adopting – a form of rights analysis known as “Proportionality Analysis” (PA) for the resolution of conflicts involving the right to sex/gender equality. Some Indian High Court judges and Supreme Court justices have used aspects of Proportionality Analysis in the resolution of sex equality rights disputes, however, this form of analysis has not been fully embraced. I assert that this form of analysis is more protective of this right than modes of analysis more typically deployed by the Indian judiciary in conflicts between the right to sex/gender equality and a public good. For example, a law which infringed on sex equality by stipulating that no woman could work in an establishment where alcoholic beverages are served might be struck down under PA as causing more harm to the right to equality than the benefit to safety the law confers. Indeed, this was a law which came before the Indian Supreme Court and the Court employed a form of PA in its determination that the law was disproportionate.

Perhaps for the purpose of this interview, the subtext of my argument is most important – that the cultivation of a culture of judicial justification and the quality of the legal reasoning that results therefrom both matter in the administration of justice.

SK: What was the most challenging part of writing the book?

JD: To investigate the advantages and disadvantages of Proportionality Analysis in the adjudication of sex/gender equality, I researched outcomes in two different jurisdictions that use this legal doctrine, South Africa and Canada. There are many challenges to engaging in this type of inter-jurisdictional comparison, among them the problem of acquiring sufficient knowledge of the jurisprudence in each country, as well as the challenge of developing an appreciation of their socio-political and historical contexts.

SK: What type of research would you like to do in the future?

JD: I remain concerned about problems of inequality and discrimination involving sex/gender (including sexual orientation and gender presentation), especially when it intersects with other personal characteristics like race, class or ethnicity. Looking closer to home at American jurisprudence, I don’t think it handles these kinds of intersectionalities very well. Once again, I plan to take a comparative approach to see if there are other jurisdictions that take a more comprehensive approach.

SK: What advice do you have for students who want to study or work on gender/women’s rights and India?

JD: There are so many Indian NGOs working to improve the lives of women in India, I think it is about coalition building in an atmosphere of equal exchange. Like America, India is a complex society and there are no quick fixes, so a student must take the time to learn, listen and understand.