As Professor Rula Quawas leads discussion in her course, Feminism in Literature at the Jordanian University in Amman, she highlights the story of Edna, the main character in Kate Chopin’s The Story of an Hour. Edna was married to man whom many in the community considered as a good, kind husband. When he unexpectedly passes away, the townspeople are hesitant to inform his wife. They knew Edna had a weak heart, and worried that she would suffer a heart attack upon hearing the news of her late husband. But after hearing the news and excusing herself to her room, Edna exclaims, “Alive, Alive, Alive!”

Though this is an American novel, this particular story of Edna encapsulates the misconception I held about marriages in the Arab world. I imagined them as something forced on the woman, that even with a “good” husband – someone that treated her well, someone that loved her – the woman would still never truly feel like she could genuinely love him. When I thought of the way that Jordan, and the rest of the Arab world worked, I imagined that marriages were all arranged, and all women were forced into something they did not want to do.

This was all until I met a Syrian woman living in Amman during one of our field interviews.

In her interview, she explained that she was thankful that she married a kind man, someone who was respectable both in and out of the house.  “I married a good person” she told us. It struck me that, having the opportunity to share anything about her family, she thought first about her husband and the blessing he has been in her life. As she talked about her husband, she mentioned how even though he hadn’t studied, he was very smart. She was excited as she informed us that at a bazaar, her husband would be showcasing a pillow he created to help people with bad backs. She talked about how wonderful he was her, with their little girls, and also with his mother. She mentioned how he never left his mother’s side when she needed someone to care for her. Out of all of his siblings, he was the only who stayed back to take care of his mother.

Like Edna, her marriage had not been arranged, yet unlike Edna, she seemed happiest and most alive when talking about him. 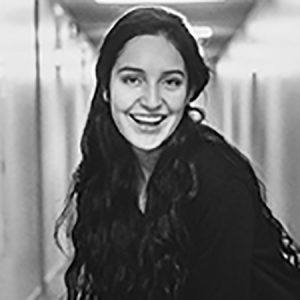 Josie Tarin is a T’20 Undergraduate. She participated in the 2017 Immerse Project and is a Student Research Assistant with the Institute.

All posts by Josie Tarin