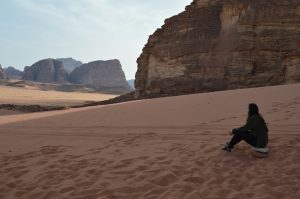 If you’ve never been to Wadi Rum, you’ve never experienced feeling like a single drop in the entire ocean. Wadi Rum, according to Bedouin legend, is said to have been the bottom of the ocean millions of years ago. Only the very top of the rocks was land. Today it is a large desert with red sand that appears like it’s from a different world, and on one of the last days we spent in Jordan, as I sat and watched the sunset, I saw the large rocks and sand that went on for miles. All I could hear was the silence that had fallen upon everyone and my voice inside my head telling me that in all of this greatness, I did not matter and that no matter what I did, I would never make a great difference.

I am not simply referring to Wadi Rum and its magnitude, but also to the refugees that we interviewed. I could listen to their stories, and I could empathize with them, but at the end of the day, that’s all I could offer them. “They cut our salary from organization. Why do you cut it? Let them [the UN] bring us back. Let them give us our salary. And take us outside, cause my mom is sick,” a five-year old little girl called to us as we were leaving an interview with her dad. We stood there in silence, shocked that a little girl could ask us a question that carried so much weight. She was just a child, and even though I would have given anything to help her, I couldn’t in the grand scheme of things. I was not the United Nations. I was not an organization. I was just me, a college freshman. Throughout all of these interviews though, one thought resonated inside me—when I’m older, I’ll be able to do more. I’ll work with the organizations to make a difference.

Later, in our meeting with the International Organization for Migration, Kate, the deputy manager at IOM leading our meeting, said, “once the refugees are on the plane, they are now out of IOM’s control.” An organization known for working with refugees could best define their work by basically stating that they don’t offer services to others once a refugee steps on a plane. Once the refugees are on the plane, they are directed to affiliates that are then expected to get them apartments, show them how to get a job, and offer any additional help. I had thought that one day, I would be able to get a job at organizations like IOM, and that from there I would be making a difference. I had not realized that the organizations that worked for refugees could only do so much. One takes care of assisting them with monetary needs every month, the other takes care of conducting their interviews, another for getting them on a plane, and another for educating them. There is not one organization that can do everything.

These organizations make up a movement that helps refugees through many aspects of their lives. There are organizations that help feed them, others that help children in school, some that focus on helping people learn useful skills that can help them make some money, the IOM, which conducts basic interviews and then gets refugees on planes. Two of the struggles that organizations face are that no one organization can do everything, and it’s also hard to get organizations to come together. At our meetings with organizations, many mentioned how hard it is to partner with others due to the competition that comes from receiving grants. Instead of wanting to work together, they want to make sure that their organization is the one getting the money to help refugees. These organizations, however, in the grand scheme of things, cannot help refugees completely, they can only help them in what they specialize in.

Much like myself, when it comes to refugees, organizations are a tiny drop in the ocean of the refugees’ problems. I imagine that these organizations feel much like I did when I was in Wadi Rum, looking out in what seemed to be an infinitely new world and feeling like the amount of work to help them solve their problems is forever increasing. As the refugee crisis grows, and as their funds and ability to help do not, they can only do so much for those that need them most.