Jail Cell Too Small or Prisoner Too Big?

Ever since the war on terrorism, torture has been a heatedly debated topic in this country. However, a story in The Netherlands provides a unique twist to this conversation.
A Dutch prisoner recently sued the government for “torture” because his jail cell is too small; or rather he is too big. The court ruled against Angelo MacD, who weighs 230 kg (approximately 506 pounds) and is 6 feet and 9 inches tall. In fact, MacD does not seem to be exceptionally obese, but rather just tall, big, and heavy. The court affirmed that the prisoner’s conditions are not inhumane.
His lawyer argued that this violates the conditions of detention outlined in the European Convention on Human Rights. I do not think that this case can be compared to “torture” and I do not think that the prison system is deliberately designed to cause pain to people of a big stature, like MacD.
So how bad could his conditions be? 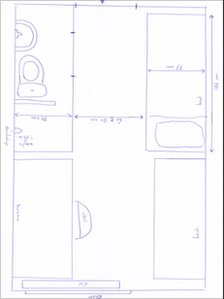 MacD must duck to enter the cell and sleep on his side at night. Showers and using the bathroom are extremely complicated for MacD. He is also unable to complete his prison work requirement due to the problems with his size. Prison officials have already tried to help MacD by adding a plank and extra mattress to his bed, but MacD claims he barely even has room to turn in his cell. MacD was arrested for fraud and sentenced to jail for 2 years, but he requested to complete his sentence which ends April 12, 2012 under house arrest.
This story raises many questions about whether or not we should provide special treatment for the obese, especially if they are prisoners. The purpose of a jail sentence, some might argue, is to provide some level of discomfort or inconvenience as retribution or a way to punish a criminal for the crime he committed. Others might think that this is unnecessary, and that we should be focused on rehabilitating prisoners rather than confining them to spaces in which it is difficult for them to even breathe. And with limited resources, exactly how much money are we willing to spend to ensure that prisoner’s are comfortable?
This seems like a special case where the prisoner is physically limited by his size, and I do not think that he should be punished for his height and weight (factors which are not always in our individual control such as genetics and the environment).
Although MacD certainly doesn’t deserve a life of luxury, I think that we can expect the prison system, if at all financially feasible, to adjust its facilities in this case to accommodate MacD so that he is able to live in decent conditions.