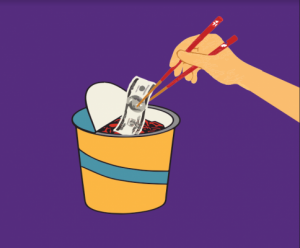 It’s one of the stereotypes we hear a lot from college students: “I can only afford Ramen noodles”, or “I’m a broke college student”. Ramen itself will only cost you 13 cents a pack, and living on a college campus like Duke with a roommate and A.C. for the year will cost you $8,286 for the 2016-2017 year, which is no small fee. However, if we take a step back from this discourse, eating Ramen noodles in college and paying for a dorm living space is not poverty. We need to differentiate between being “broke” in college and coming from a lower socioeconomic status. The reality for many students, is that they aren’t actually “broke”. Their parents might not be giving a stipend every month, or they may not have pocket money, and they truly may be eating Ramen noodles more often than they should. However, if a student hurts their leg and needs a cast and crutches, health insurance-most likely from their parents and family will take care of the bills.

If we examine what poverty looks like according to the U.S. Census, the annual income threshold for living in poverty was $12,082 for a person and $24,257 for a family of four. in 2015 there were 43.1 million people living in poverty in the U.S. –  approximately 13.5% of the total population. The U.S. is a country of great wealth and prosperity, so it can be easy to forget these numbers. While poverty in the U.S. may not look like poverty in other countries, it still very much exists and is the situation of over 10% of Americans today. It’s important to acknowledge this. One of the most expensive costs today is health care. Since we have a privatized health care system, the average cost of health care for a family of four in the U.S. is $17,500. Health care is not a luxury item, it is a basic human right and something everyone should be able to have. So if a family of four bought health care coverage while living at the poverty line, they would have $6,757 remaining. $6,757 to spend on housing, food, transportation, education, clothes, supplies, and all the other very important essential items that we humans need to simply survive. Even if the family ate “straight Ramen” they could not afford healthcare coverage living by the U.S. poverty line.

Yes, I am only looking at health care, but it’s important to consider the impact we make when we push the stereotype of the “poor” college student. Some students do live below the poverty line, and those students’ voices shouldn’t be silenced or ignored because they are in college. For the majority of students who say “they’re broke”, are you really? We need to be mindful about saying we’re poor. By casually putting the  “broke” label on and parading around our  packet dinners as our only form of sustenance in college, we take a very real problem of poverty and diminish it. Not being able to afford a steak dinner or living off the college meal plan is not the same as not being able to afford asthma medication. Having the privilege of attending college already puts students at a better advantage than many Americans.

It is okay to vent about crippling student loans, or extremely high tuition and board rates, the point of this article is not to say some financial worries and burdens don’t matter. We simply need to think critically about how our comments impact our view on poverty. In 2015, many Americans couldn’t afford health care. Their “broke” status isn’t in the context of college; there is no escaping home, there are no parents to foot the medical bill when something happens. So let’s stop perpetuating the “broke college student” stereotype. For many this isn’t a temporary state of discomfort that goes away during breaks and the summer – it’s life, and poverty can be immensely challenging and difficult. It’s not just eating Ramen Noodles.