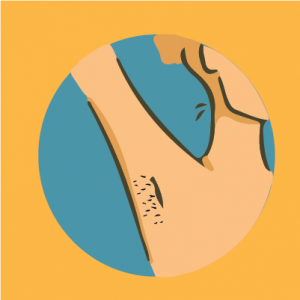 In the 7th grade, I learned that I was expected to shave. Don’t ask me how this came up, but the girls in my class were comparing shaving routines and joking about how they don’t want to look like guys (i.e. hairy and gross). I started using my older sister’s razor, despite my mom’s warning that once I started shaving I wouldn’t be able to stop and despite the fact that being East Asian, my leg hair was nearly invisible. But my legs felt so smooth after washing off the shaving cream. It felt like a very grown-up thing to do, and I didn’t want those girls from gym class to notice my leg hair and look down on me because of it.

When I did stop shaving after a few months, it wasn’t because I had a feminist awakening that told me I needed to break out of this pretty absurd gendered expectation, but mostly because I got lazy and noticed that it didn’t make a difference either way.

The feminist awakening online did help justify my relative hairiness, though. For example, while my legs don’t need shaving, my armpit hair is much closer to what my actual hair looks like, so I’ll shave for special occasions but not regularly. Near the beginning of the year, my hallmate was visiting in my room, and I was wearing a tank top, so she noticed my armpit hair and said “You don’t shave?”, not aggressively, but with a general curiosity. I said no, not usually. A pause. And then, “Oh…good for you!”

There’s a chance she was silently judging me, but it sounded more like she was impressed that I was able to muster up the courage to not care about social norms, like it was some brave thing to do. And that tends to be the case when women, or celebrities on red carpets, do something truly daring like letting their hair grow where it pleases.

Not all women are aware of all the reasons we shouldn’t be expected to shave. Many girls are aware of its immediate risks and perhaps even its social implications, yet have been so far removed from its origins that they are able to justify them. We are taught that with beauty comes pain: “the kind of pain women are taught is worth it.” Women teach each other to shave, but men were the ones who told us our hair was a symbol of primitiveness, associated with “less developed” forms.

So there isn’t really anything except for that archaic notion that should stop women from putting down the razor. Except it’s not so easy to completely ignore the rules we’ve grown up with. I still think that my hairy armpits are unattractive, which is why I shaved before I put on the sleeveless dress I wore this weekend. Does that make me a bad feminist?

But you can’t really blame women for wanting to be the beautiful, hairless girl they see in magazines. “Come into Ideal Image laser hair removal today! Buy one area and get two areas free!” Is it our responsibility as women to actively resist a society that is constantly telling us we are not beautiful when we are natural?

Maybe it’s not that all women should just stop shaving and waxing and laser-hair-removing, but that they shouldn’t be forced to keep worshipping ridiculous ideals in the first place. We need to let 7th grade girls know that it’s not gross to have body hair, which means we need to stop marketing shaving as something that will make you a “goddess” (looking at you, Gillette Venus Razors for Women). Women need to remember that men decided these beauty standards, and we have no obligation to abide by them.