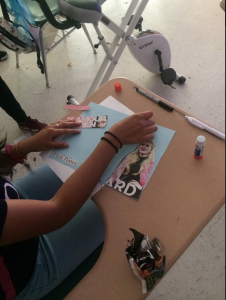 Durham Magazine released its 6thannual Women’s Issue, spotlighting thirteen remarkable Bull City women (including Areli Barrera de Grodski!) with very diverse careers and backgrounds.Similar to the mentors, I noticed that despite having different occupations, these women are all nevertheless working towards the common goal of “shaping our future.”  While reading this feature, an observation about identity shared by visual artist and Githens Middle School teacher, Saba Taj, particularly resonated with me, “coming up with a term to describe a group of people can give them agency…but that identity and word can have boundaries, too. It creates a new kind of confine.”  I thought about Taj’s insight in relation to a photograph exhibition, The Wonder of You: Photos & Words by Black Girls & Women, I recently viewed at the Center for Documentary Studies at Duke University, and also to the zine project the eighth-graders at Brogden started this week.

The Wonder of You is comprised of eleven different photographs taken by black women and girls of all ages, and is “curated with love” by The Beautiful Project (TBP) founder and executive director, Jamaica Gilmer, along with the support of several other women.  Described as a “collective of image makers using photography, writing and care to create space for Black women and girls to confront the mass misunderstanding, misrepresentation and misuse of their likeness in the media and the world at large”, TBP solicits work from women throughout the United States. While visiting the exhibition, I thought about the prominence of gender and racial identity in the work.  As Gilmer explains, “we created a space where girls could see reflections of themselves in both the beloved people in the images and the girls and women behind the lens.”Indeed, every entry features a black woman or girl, and almost all of the titles include such identifying labels as “black”, “girl” or “woman.”  Under her photograph, Black Girl Holding A Watermelon, Self-Portrait, Danielle Nolan writes, “I did a re-enactment of this photo in my neighborhood on the west side of Chicago to express both the racial and gender stereotypes black girls face.”

I also thought about how identity has been construed as both a limiting and liberating construct during the zine-making session this week.  As a concluding activity, designed to provide the participants with an opportunity to reflect upon their experiences this year, each girl has been asked to create a page of a collective zine in response to the question, “What have you taken away from your participation in this group?” I believe that through the examples set by the mentors, the mentees have realized that they can also achieve goals that may be beyond traditional gender boundaries.  Due to the brevity of the meeting period, we were unable to complete the zine; however, I noticed that several young women were illustrating, collaging, and writing positive messages embracing characteristics of their identities.