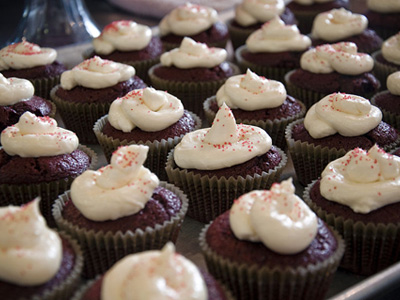 I’m coming back from an Open House hosted at the Kenan Institute this afternoon, and it was a perfect cap to the first week of class. Allow me to recount quickly my building enthusiasm going into the weekend (in small part, I will admit, due to the delicious cupcake I just enjoyed at the open house…thanks Daisy Cakes!)

Starting Monday morning, the atmosphere was noticeably different. First, when I entered the door there was a fresh Chronicle waiting for me to peruse over my morning coffee. That has become a ritual more now than as a student, as part of my attempt to stay well informed of campus affairs. New Kenan signage (including a revamped logo) was in place around the building. Most importantly, students were again wandering the halls of West Duke. Some were wandering into our office suite and needing slight redirection to their Math 31 class.  That’s all part of the job at a university, though, and one that I really love. If you were one of those students, come back and chat after class sometime—just don’t ask me for help with Math 31!

Some of the students I saw in West Duke this week were recently returned from DukeEngage Dublin, the same program where I got my start with Kenan four years ago, so I was very excited to hear about their experiences. I think they would all go back in a heartbeat, by the way. Other students were new to Kenan, as part of the latest FOCUS cluster in Ethics, Leadership, and Global Citizenship. In counterbalance to the eager and promising group of freshmen, we also have a group of Ethics Certificate students participating in a Discussions in Ethics course, and they are mainly upperclassmen with distinguished track records at Duke and serious deliberations already completed about the role ethics plays in their studies.

Going on up the ladder, we have a new set of Graduate Fellows who will be participating in our Monday Seminar Series. The kick-off seminar this week was led by Graduate Fellow Shana Starobin, who also added excitement to the week with the news of her participation in a White House forum on hunger. You can read about her experience, and her work on food insecurity, on the Nicholas School website as well as in this Chronicle Q&A. And of course our faculty are back in the office on a more regular basis, discussing exciting plans for the coming year, and enlivening conversations in general.

It was the interactions and the conversations with both old and new faces at Kenan that made for such an exciting week. Let it be known that I am an extrovert and a noted small-talker, so an increase in the number of people around me is likely a good thing. But the layers of connections become more intricate and rewarding with each school year, as I am starting to see. I have a broader network with both students and faculty around the university. I have a fuller knowledge base with which to guide new connections, such as a freshman interested in getting involved in x or y, or a new senior fellow wondering just how the institute model fits into the university.

Each first week of class brings the prospect of expansive new learning as well as meaningful relationship building. Paramount to both of these things is a healthy amount of dialogue and conversation. Whether that’s through a specific program or an informal hallway chat, Kenan works hard to promote a space for such conversation. One of our catch phrases is “think and do.” Perhaps we should add an intermediary along the lines of, “think, talk it out with the interesting and informed people around you, and do.” I know my work, this blog included, benefits from such a process. So here’s looking forward to the upcoming conversations this school year will bring. Best served, of course, over cupcakes.