The first sentence of ‘Ghosts and Empties,’ the opening story of Lauren Groff’s terrific Florida, does not bring to mind climate change. ‘I have somehow become a woman who yells, and because I do not want to be a woman who yells, whose little children walk around with frozen, watchful faces, I have taken to lacing on my running shoes after dinner and going out into the twilit streets for a walk, leaving the undressing and sluicing and reading and singing and tucking in of the boys to my husband, a man who does not yell.’ It sounds like the opening of a story about the ways in which parenthood can trap women, about frustration with no acceptable outlet. 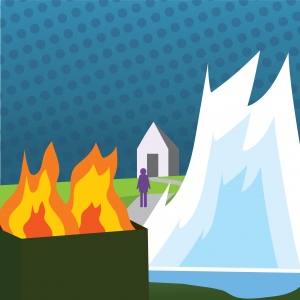 ‘Ghosts and Empties’ have moments along those lines (bent mothers ‘scanning the floor for…the people they once were, slumped in the corner’), but the dread that brings its narrator out into the streets is ecological: ‘During the day, while my sons are in school, I can’t stop reading about the disasters of the world, the glaciers dying like living creatures, the great Pacific trash gyre, the hundreds of unrecorded deaths of species, millennia snuffed out as if they were not precious.’

The other beings she observes on her walks – a pair of black swans, a homeless couple – try to provide care for others under desperate circumstances. Otters eat two of the swan’s four cygnets, and the other two die of fright when the wildlife service tries to move them. The homeless couple disappears, their camp among oaks the site of a controlled burn and the mall plaza used for sleeping fenced off ‘for construction, or so the sign says.’ People and animals trying and failing to protect their families, the narrator caught in the terror that everything is rolling towards an inevitable end. The plastic pull tabs she sees in the aisles of a drugstore are not just pull tabs, but pull tabs ‘that will one day end up in the throat of the earth’s last sea turtle.’

Amitav Ghosh, in The Great Derangement, argues that fiction, especially the kind we consider ‘serious,’ has failed to depict climate change. Its events – big storms, unpredictable seasons, unprecedented fluctuations – are too unlikely-sounding for realist fiction, and so do not fit within its genre requirements. Groff’s story includes no such spectacular events, and yet she narrates climate change. Not as natural disasters, floods, or tornadoes, but as anxiety that she is not able to care for her children.

Thinking of the missing homeless couple, she writes, ‘Please…please let my couple come by, let me see their faces at least, let me take their arms.’ Her approach to the difficulty of writing about climate change, to make carbon parts per million into compelling narrative, is to write about climate change as the end of care. It is an end she feels responsible for (she passes up the Epson salts she means to buy because ‘I am not ready for such easy absolution’) and one she cannot by individual effort avoid. Like Ada Limón, in her poem ‘The Leash,’ also a reflection on climate and care, she finds herself unable to do much more for her family than Limón does for her reader, a desperate ‘Reader, I want to say: Don’t die.’

This may sound fatalistic and unhelpful, fruitless despair at the end of the world. But that would be an uncharitable reading. The power of Groff’s story is that she depicts climate change as intimate and familial. Narrating climate change need not be about big events (though there is space of that too), but can be about the small and familiar: two swans trying to have babies, a homeless couple looking for somewhere to sleep, a mother hoping to make it through the bedtime routine without yelling.

‘I hope they understand, my sons’ she writes at the end of the story, ‘both now and in the future just materializing in the dark, that all these hours their mother has been walking so swiftly away from them I have not been gone, that my spirit, hours ago, slipped back into the house and crept into the room where their early-rising father had already fallen asleep…and that…I climbed the creaking old stairs and at the top split into two, and heading into the boys’ separate rooms, I slid through the crack under the doors and curled myself on the pillows to breathe into me the breath that my children breathed out.’ Nothing very grand, no great spectacle. Just a woman doing her best to manage anxiety about a future she fears, a future that is not yet unavoidable, and yet one that no amount of good intentions and parenting excellence can shield her sons from. A story about climate change in which the millennial comparisons and the lists of data settle in to the small, suburban spaces of a home.