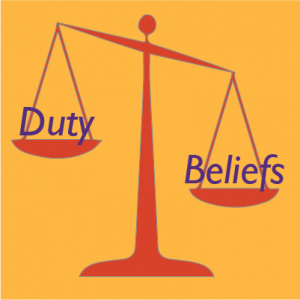 There is a growing movement among the liberal voter base urging the electoral college to vote for Clinton over Trump, regardless of his/her state’s popular vote. On the one hand, such a move would speak out in defiance of identity-based aggressions and display solidarity with minority populations fearful of the consequences of a Trump presidency; yet it sets a somewhat dangerous precedent for the power of the electoral college in deciding our national fate.

The decision to ignore the “rules” for electing a new president could put an individual’s moral and professional obligations at odds. This brings up an interesting recent example of Texas elector Art Sisneros, who has chosen to resign rather than cast his vote for Trump. He released an explanation for his decision in a blog post, which has subsequently sparked heated discussion. As an elector, his pledge obligated him to vote in the best interests of his people; this put him directly at odds with the duty of voting for the majority-chosen candidate. But if the moral conflict is rooted in voting in favor of a Trump presidency, then resigning won’t help, since the elector would still be complicit in electing Trump by allowing a pro-Trump elector to replace him.

The whole situation, in fact, reminds me of a conservative response to the Obergefell v. Hodges decision, in which county clerks working in courthouses took one of two approaches – 1) refuse to grant marriage licenses to same-sex couples or 2) quit their jobs out of refusal to marry same-sex couples on religious grounds, much like Sisneros’ resignation. Here, once again, the motivation for quitting is founded on a basic moral conflict between personal integrity and professional obligation. And in both cases, there is no clear answer for which should take precedence.

Yet the public responses to the two scenarios are drastically different. In the former case, there is generally strong support for a movement to cast electoral votes in favor of Clinton, regardless of voting results – in other words, that looking out for the well-being of the nation and making the “sensible” choice is more important than upholding the duty of the electoral college. Yet, in the latter case, there was widespread public outrage when individual clerks placed personal ethical values over duty of public office and refused to grant marriage licenses.

This calls into question – is there an underlying moral inconsistency here? In one scenario making a decision valuing moral over professional values was lauded, whereas in the other the same decision was met with harsh criticism, even under legally equal terms. We seem all too ready to criticize when we disagree with a situation, but if the only difference between the two is a preference of opinion for one moral choice over the other, then what are we being critical of, if not simply the expression of beliefs?

At least it’s refreshing to see people acknowledging their conflicts of interest; that should serve as inspiration to someone.

Writer’s Note: This piece was written in early December, before the official inauguration of President Donald J. Trump.