Everyone Deserves a Home

It goes without saying that the western economic model thrives on continuous innovation. Firms are constantly developing new products and services that make our lives simpler and their profits bigger. However, as the rich are getting richer, the poor are getting poorer. In response to this ever-increasing gap, the field of social entrepreneurship has flourished, combining capitalism with social action and volunteerism. The nonprofit organization, Everyone Deserves a Roof, has innovated a small-scale solution to homelessness, but does it treat the symptoms rather than the cause?

According to a report compiled by the National Law Center on Homelessness and Poverty, more than three million Americans experience homelessness every year, and this number has increased radically over the past few decades. There aren’t enough accommodations and shelters to house them all, so far too many have no choice but to live on the street. EDAR has developed a combination shopping-cart-and-shelter that protects belongings during the day and serves as a bed at night. EDAR currently has units in Southern California, Phoenix, Denver, and New Jersey. 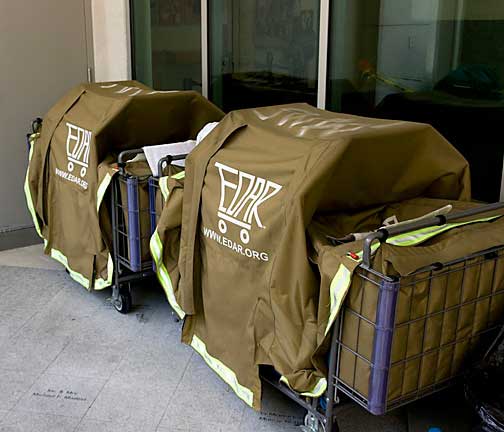 To be honest, I was initially turned off by the project for a couple of reasons. I agree with their values – everyone deserves a roof – but even more strongly I believe that everyone deserves a home. EDAR provides a temporary night-time shelter, but it doesn’t offer a real bed, a shower, or security. My guess is that one of the reasons this project works is because it’s cost-effective, but still, shouldn’t philanthropic organizations focus their attention on alleviating homelessness? Or even just improving homeless shelters? I tend to think that there will be people who will look at organizations like EDAR and say something to the effect of, “Well, they have shelter, the problem doesn’t exist anymore.” But maybe I just don’t have enough faith in people.

However, I looked at the Frequently Asked Questions on the EDAR website, and it seems that the staff has read my mind. One question asks, “Why do homeless individuals use EDAR units? Aren’t shelter beds more comfortable?” The answer readily states that many homeless people don’t feel comfortable at shelters, many shelters are currently at maximum capacity, and an EDAR unit is “not as good as permanent shelter, but it is far much better than a cardboard box under a freeway overpass.” Additionally, another response explained that there are EDAR communities of 10-15 units on land provided by philanthropic partners which, I believe, however Hooverville-esque could provide the sense of security and community I thought was previously lacking.

I stand by my conviction that the larger problem of homelessness is yearning to be solved, and the addition of more and more nonprofits aren’t exactly pushing the process forward. But, I do agree that there is an immediate problem that needs to be solved while someone else works on the grander issue, and EDAR can provide an instantaneous solution.