Living in a Wounded World 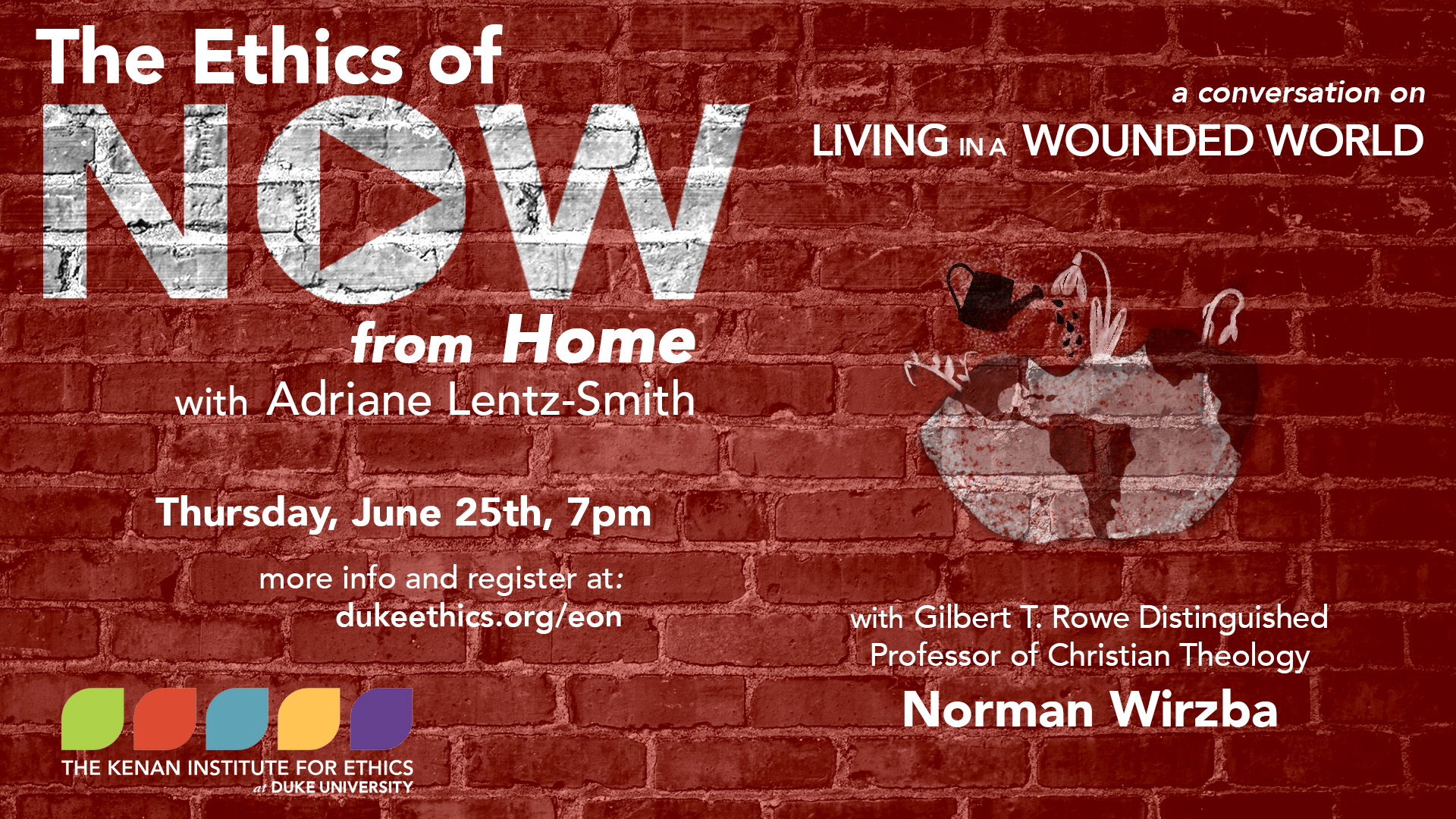 The Ethics of Now with Adriane Lentz-Smith continues from home with a series of brief, thoughtful and timely conversations about the ethical dilemmas of this historic moment. Join Professor Lentz-Smith and and Gilbert T. Rowe Distinguished Professor of Christian Theology Norman Wirzba for a conversation on environmental care, “Living in a Wounded World.” After registering, you will receive a confirmation email about joining the webinar.

Norman Wirzba, Gilbert T. Rowe Distinguished Professor of Christian Theology and Kenan Senior Fellow, pursues research and teaching interests at the intersections of theology, philosophy, ecology, and agrarian and environmental studies. He lectures frequently in Canada, the United States, and Europe. In particular, his research is centered on a recovery of the doctrine of creation and a restatement of humanity in terms of its creaturely life. He is currently the director of a multi-year, Henry Luce-Foundation-funded projected entitled “Facing the Anthropocene.” In this project, housed at Duke’s Kenan Institute for Ethics, he is working with an international team of scholars to rethink several academic disciplines in light of challenges like climate change, food insecurity, biotechnology and genetic engineering, artificial intelligence, species extinction, and the built environment.

Professor Wirzba has published several books, including The Paradise of God: Renewing Religion in an Ecological Age, Living the Sabbath: Discovering the Rhythms of Rest and Delight, Way of Love: Recovering the Heart of Christianity, From Nature to Creation: A Christian Vision for Understanding and Loving Our World, Food and Faith: A Theology of Eating (in its 2nd Edition), and (with Fred Bahnson) Making Peace with the Land: God’s Call to Reconcile with Creation. He is now finishing a book called Being Human in a Wounded World to be published by Cambridge University Press late next year.  He also has edited several books, including The Essential Agrarian Reader: The Future of Culture, Community, and the Land and The Art of the Commonplace: The Agrarian Essays of Wendell Berry.

Professor Wirzba serves as general editor for the book series Culture of the Land: A Series in the New Agrarianism, published by the University Press of Kentucky, and is co-founder and executive committee member of the Society for Continental Philosophy and Theology.