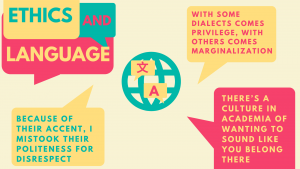 When speaking to a professor in class, another peer waiting for the C1, or a family member on the phone, we change our tones or even dialects in ways we don’t realize. This week, we took to the couch to discuss the ethics of  language and how it affects people’s identities on Duke’s diverse campus.

We first started by asking students whether they considered themselves to have accents. One student said, “Cincinnati doesn’t really have an accent. We sound normal. But I met a girl from Chicago and she told me I sound ‘Ohian’. It was weird.”

The most common slang word brought up on the couch was “y’all”. Someone said that “people laugh when I say “y’all”’ while others claimed to have only started using “y’all” upon coming to Duke.

Sometimes, the dialects and languages that students grew up with are not like those used in academic settings. With certain languages comes privilege and with others comes discrimination. A student commented on last year’s biostatistics department controversy. According to the student, while Duke prides itself on attracting diverse students, it doesn’t actually support its own international students. International students receive little help in cultural adjustment and overcoming language barriers.

A couch participant from Miami spoke on language stratification among Miami residents. He said, “Spanish is essential for getting around”. Most of everyday interactions are held in Spanish, he explained. However, English-speaking immigrants hold an advantage. “Hatians arrive speaking perfect English, and because of this, they face fewer barriers and obstacles than other immigrants and people of color in the US.”

More students commented on taking language classes at Duke, Duke-specific slang, and the differences between written and spoken grammar. Couch participants had unique views on their life experiences pertaining to language. Rather than attempt to sum them all up, one student put it best: “Language is a complicated thing”.

Next week, Team Kenan will couch cultural exchange and cultural appropriation. Couching times and locations can be found here. 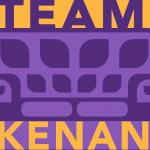