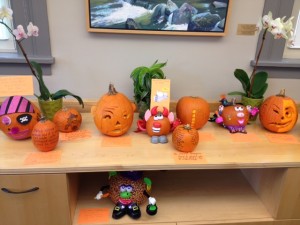 Happy Halloween from the Kenan Institute! I’ve always been a fan of pumpkin carving, but I’m not sure I had ever thought of it as an ethical activity. Well, we say we promote moral reflection around here, so that’s just what we did for our office pumpkin carving contest. We were tasked with creating the most ethical pumpkin! Whether arm deep in pumpkin gunk or working magic with duct tape and a set of sharpies, we all had some time to reflect on how to portray a moral character. Emily Sparrow the pirate pumpkin was advocating against music piracy. Pat the Ethical Pumpkin revealed a different side of himself depending on which angle you looked–reminding us that discerning the right thing to do requires examining an issue (or pumpkin) from multiple sides.  PumKIEn displayed the Kenan logo and described herself as putting in the hours to make the world a more ethical place. These are just a few examples of the fun and creative ethical pumpkins my colleagues came up with, and it makes me appreciate being a part of a place where, as another pumpkin aptly put it, ethics is (seriously) everywhere (including pumpkins)! 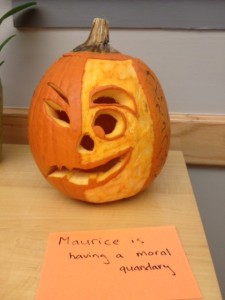 Kenan’s FOCUS Cluster: Ethics, Leadership, and Global Citizenship acted as judges for our ethical pumpkin carving contest (a little healthy competition certainly drives creativity, right?!).  Here is a closeup of the winner, Maurice.  He is having a moral quandary.  Shouldn’t we all every now and then?