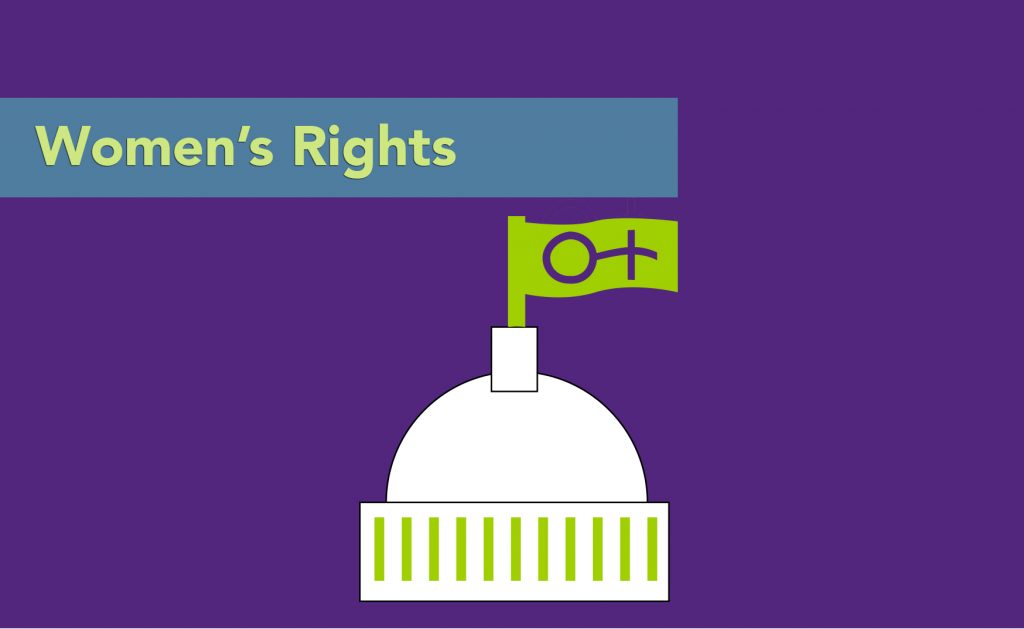 How is it that an organization of between 10 and 12 staff members gets called upon to edit and approve pieces of legislation or come to the front lines of a rally along with the prominent senators? While the Feminist Majority has undertaken multiple approaches to achieving change in its near thirty-year existence, creating close networks with women in politics has proven to be one of its greatest successes, though it may be that a greater facility with social media will be necessary to draw younger people to continue this success into the future. One of the Feminist Majority’s main approaches to social change is working closely with the legislative process, but this method could not be possible without the ties FM’s staff has created over the years with political figures. But how does this influence begin?

The ear on the door strategy helps the organization plan its next campaign moves more efficiently and get better ideas on how to act against congressional opposition. In addition, this networking strategy makes donation decisions more effective than simply throwing money at candidates who may have no shot, even with FM’s monetary support.

The connections and networks the Feminist Majority maintains makes the Feminist Majority’s founder, Eleanor Smeal, one of the most prominent and connected figures in the feminist movement. Smeal has an influential voice throughout the feminist community. The power within the feminist community translates into influence in most aspects of politics. The media, asking the organization to do the impossible task of representing the entire feminist movement, frequently requests Smeal’s remarks on the current state of an issue. For example, she was asked to do a press conference following the Senate’s healthcare bill reveal and to comment for multiple media outlets on the attacks the Trump administrations has taken on Title IX and abortion worldwide. Legislation with the Feminist Majority’s vote of confidence can go a long way in garnering votes in congress. Politicians understand that Smeal’s and the Feminist Majority’s voice carries to a great mass of voters and other influential circles. If a politician votes to support women’s rights, the Feminist Majority awards them with praise and positive media coverage throughout its social media channels and Ms. magazine readership. However, if the politician attempts to digress from the movement, especially if a political seat is vulnerable, the Feminist Majority will try to launch campaigns against the candidate through its PAC work.

The Feminist Majority is working to improve its organizing, grassroots capabilities. Founded in the 80s, with a base of supporters who are still active but waning, the Feminist Majority thrived through letter campaigns and connections to other active feminist organizations, like the National Organization for Women (NOW). However, as the most successful social justice movements throughout the world have proven, activism nowadays will not amount to action without an expansive social media presence. Because most monetary support comes from older individuals, who have been part of the fight for decades now, it has grown more difficult for the Feminist Majority to organize rallies, for example. The Feminist Majority, through an awesome communications director, has already broadened its social media, but not yet to the point where substantial rallies or protests can occur with the click of FM’s share button. FM has the ability to “empty offices” to create a physical presence somewhere, but the organization is not yet at the point of getting young people activated, which is essential to the future of the organization. While the Feminist Majority must find ways to organize a younger membership base, “viral” activism may just take valuable resources away from its main, most successful approach of legislative empowerment. However, if expanding a social media and grassroots activism body is necessary to garner a younger crowd, a group that will be indispensable in the future to supporting the PAC arm as well, then it will need development.