Duke in Durham: The Voting Edition

This November, Duke students can choose to game their vote by registering to vote in North 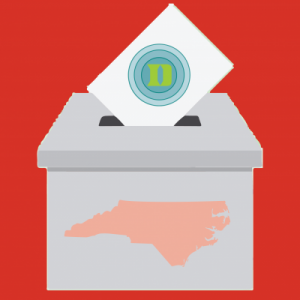 Carolina. They can choose to have their vote be more powerful in a swing state, taking advantage of the electoral system structure. Accompanied by a moral impetus to ensure a misogynistic, racist and unqualified man does not become president, Duke students can march into polls forcefully, ready to “vote their conscience”.

But how many of them have heard of Cherie Berry or Deborah Ross? In voting this year, they not only face the choice between Trump and Clinton, but also a slew of local elections also on the ballot. The ability to maximize democratic privilege for out-of-state students at Duke is a tempting incentive, especially in such a polarizing election.

However, the choices Duke students make are notably precarious – most students have only heard of Cherie Berry through pictures in elevators, and pamphlets handed outside of the polling station. Though not an inherently bad choice, this interaction is fraught by the dimension of the Duke-Durham relationship. Given the uneasy tension between Duke and Durham, students who are here for only four years do the surrounding community a disservice by being uninformed voters. The problem is more than just being uninformed though, the problem is that they are uninformed voters, deciding for people that are not their own, and then graduating before they face even the slightest whiff of consequences. Most Duke students vote democratically, while North Carolina in general is a red state. Though it is true that North Carolina is home to several college students, who are undeniably a part of the NC electorate, voting here means accepting being a part of the community. Particularly for Duke students, this sense of community often extends only to the Duke bubble, rather than Durham as a whole.

The ethics of voting in Durham as an out-of-state student are multifaceted. Can students who are here for only four years, unaffected by many of the policies enacted by the people they are electing, be expected to vote responsibly? Even residents of North Carolina are swayed by elevator pictures of smiling blond women – so can we expect more out of Duke students?

This debate is also inherently partisan. Two days before early voting began on campus, the Democratic party of North Carolina paid for stickers that Duke Democrats posted on the door of every in county registered West Campus resident. Millennials are a key Democrat demographic, and it serves Democrats to encourage college students to vote in North Carolina. These same college students know little about other votes on the ballot, and find it easy to resort to voting Democrat for every local election. Blind voting for democrats, may in theory seem practically simple but is actually ethically complex. This practicality becomes more fraught when more than one Democrat runs for the same seat or referenda on local issues as diverse as library and community college bonds litter the ballot; both are happening in this election. T

It is undeniably important that college students vote in this election and set themselves up for a lifetime of civic engagement. However, Duke students are hardly the model for engagement with Durham. Uninformed voting in local elections only serves to further strain this relationship. Though thwarting Trump presents a powerful moral impetus to vote in North Carolina, in the new vote sharing economy, there are several ways to game your vote to ensure Trump doesn’t win. Duke students would be well served to remember he is far from the only issue on the ballot.