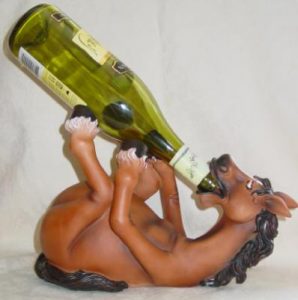 Everyone knows drinking alcohol and driving vehicles don’t make a good match. But what about handling other means of transportation while under the influence of drugs or alcohol? Recently, a public safety ad in Montana which broadcasts catching a ride home with a horse as a metaphor for finding a safe ride home is now actually calling into question whether riding your horse home while intoxicated is illegal.

According to Montana law, horseback riding while drunk is, in fact, legal, as an animal is not lawfully defined as a vehicle (this isn’t the case in Colorado). So should Duke consider installing a safe-ride horse service to take students between East and West campus post-Wednesday-night Shooters (it may get you home faster than waiting for that C-2)? Not quite.

The larger issue at hand is what, exactly, it means to have a “safe ride.” The point of the public safety ad was not that drunk people should now start riding their horses around (although it was interpreted that way by many Montana residents given the horse culture there) but rather that an intoxicated person should make sure s/he has a ride home of which s/he is fully aware and in control. Which probably isn’t a horse.

On a college campus, there is always discussion about drinking alcohol and staying safe. Though it’s pretty strange to think about horses as a ride home, are some of the ways Duke students get home any safer? Is walking home drunk safe enough? What about flagging down the Jimmy John’s car? The dangers of drinking don’t stop at operating machinery. When you’re intoxicated, your judgment is impaired. This is the case whether you’re getting in your car or someone else’s, your motorcycle, your Nimbus 2000, and yes, even when you’re walking. The important part is to make sure you’re with someone you can trust to be monitoring the situation for things you may not notice in your après- St. Patrick’s Day haze. Tragedy involving alcohol can occur in any situation whether or not vehicles are involved; in fact, it happened here on campus this year.

We need to make Duke an even safer place for those who decide to drink. True, we have a bus system and a van service, if you’re so inclined to wait between 20 and 45 minutes at 1:30 AM on a Saturday.  Which you probably aren’t. How about a walking service, in which Duke provides a trained official to make sure you walk back safe to the boondocks that is Edens Quad? How about offering students safe rides in a more timely fashion so they aren’t standing in the cold or, more likely, stumbling back to their dorm by themselves? If the Duke administration is really as committed to keeping its students as safe as it claims, new ideas need to be encouraged and implemented with all due speed. In the meantime, if springtime in Durham leads you to party it up, leave your horse at home.