Does Free Speech Ride the Bus? 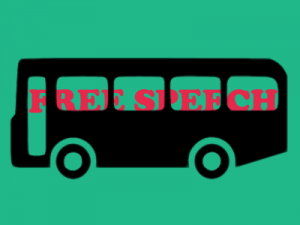 This summer, on my commute to work on the New York City Subway 6-Line, my normal morning nap was interrupted by a fog horn-like voice. After unsuccessfully trying to drown it out with Taylor Swift, I tuned into the speaker’s words.

Unlike the usual subway preacher/ rapper/ drum artist/ con artist with an upbeat message, this man was proclaiming eternal damnation for everyone (in very graphic terms): Asians, Jews, Russians…the list went on and on. I was grateful when an MTA police officer asked the man to step off my train.

Reflecting on this scene brings me to the logical question, what are the limitations of free speech on public transit? Does free speech ride the bus? In what forms and what ways?

Recently, advertisements by the American Freedom Defense Initiative (AFDI) have drawn controversial fire in New York City and in our own backyard, Chapel Hill. The ad reads:

In the case of New York City, the District Court has ruled that MTA cannot ban the advertisement because doing so would be a clear violation of the First Amendment. The court reasoned that the ad does not constitute “hate speech,” but rather, a viewpoint akin to “Southerners are bigots,” and “fat people are slobs” — certainly offensive, but not prohibited by law.

On the other hand, the Chapel Hill town council has currently suspended new bus advertising and is revising its policy on whether to allow religious/ social/ political ads on its buses. It is also deciding whether to continue advertisements by the Church of Reconciliation, which advocates the opposing viewpoint to AFDI. The church’s ad reads:

“Join with us. Build peace with justice and equality. End U.S. military aid to Israel.”

I believe that these ads have more in common with my offensive subway preacher (whose speech was curtailed) than advertisements on TV or billboards.

First, the nature of these advertisements is different from those promoting a product. Although some commercial advertisements may be offensive as well (ie: steak advertisements to vegetarians), they do not specifically target groups of people. The litmus test should be whether the advertisements ses out to offend or discriminate against one group. In the AFDI case, the answer is clearly yes. The Church of Reconciliation advertisement is more debatable.

Moreover, the location is key. Unlike political messages on a television channel or a blog on the internet, these “views” promoted by the advertisements are imposed upon everyone who rides public transit. I can change the channel or ignore a blog post with much greater ease than I can boycott public transit. Thus, the standards for what qualifies as acceptable free speech should be stricter as well.

AFDI’s advertisement is not as obtrusive as the man on my subway, but the principle underlying both should be the same. Free speech should not ride public transit freely. We should consider which groups merit protection from offensive content.