De-Polarization and Empathy – there’s an app for that! 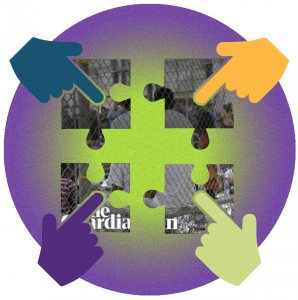 Sparked from a 2017-2018 Bass Connections project, “How to Ask Questions,” Philosophy PhD student Hannah Read has now pivoted her research around empathy and political polarization into a new project slated to appear in your favorite app store. Read is interested in finding ways for promoting empathy that help people relate to each other across polarizing and antagonistic topics. During a Spring Breakthrough class on polarization, led by Kenan Faculty Walter Sinnott-Armstrong, Read and her team of undergraduates (Kiara Lawson, Jeffrey Zhang, Dominic Van Cleave-Schottland, and Gaurav Uppal) landed on the idea of developing a Jigsaw-style game.

The Jigsaw Classroom is a cooperative learning technique pioneered in the early 1970s by Dr. Elliot Aronson and was developed to promote empathy and address racial conflict in newly desegregated classrooms. In the traditional Jigsaw model, each student working on a joint research project is responsible for becoming the designated expert in a specific area. Prior to sharing their knowledge with their own group, they confer with the same subject experts from other groups. Each individual is subsequently quizzed on all the project material, including their own research and their teammates’ contributions. In a successful team, empathy is cultivated from cooperation and interdependence.

In Read’s adapted multiplayer game, players are challenged with the goal to solve a puzzle or complete a task as a team in an allotted amount of time. With four players per team, each is shown a particular piece of information (i.e. a tweet, video, image, audio clip, news article, political candidate website, etc.), which they then share via chat room with select players and finally in a group chat. In order to win, players are individually quizzed on all the information from their teammates and a final team score is earned based on the combined totals.

“We’re very hopeful that our game could have a real, positive impact on polarization. Of course, it’s no silver bullet. But even just having the opportunity to positively interact with people from different political backgrounds could go a long way toward promoting positive discourse and empathy — things that seem notably absent in the contemporary political climate. We’ll start with Duke and take it from there!” – Hannah Read

Over the summer, Read continued working on the game, enlisting the help of undergrads Lawson and Zhang as well as Lia Miller, a gifted high school student from Chapel Hill.  Together, they developed storyboards and initial content for the app.  Dedicated to making this concept a reality, Read pitched the de-polarization and empathy game to Ric Telford who teaches an app development course in the Pratt School of Engineering.  Starting this fall semester, a group of students in Telford’s class will create the app, with the full team continuing work through the spring semester.  In a practical beta-test to mitigate antagonism between politically polarized people, Read plans to launch the game for the Duke community in advance of the 2020 presidential elections.