Contest winner: When do I have an obligation to speak up? 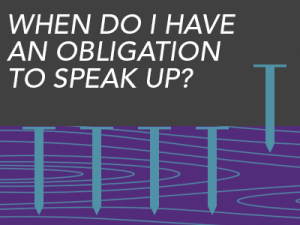 This post is one of three selected as a winner of this year’s blogging contest. The author is Joy Liu, Trinity 2014, Public Policy and Biology double major. Congratulations, Joy!

When do I have an obligation to speak up?

Last week, in section for one of my classes, we were discussing op-eds in preparation for our own op-ed assignment. One example that we read and talked about was in defense of the North Carolina School for the Deaf. To summarize, the author argued against closing the schools as part of state budget cuts both from an educational perspective as well as a deeply personal one—the author’s parents both worked in special education.

In the middle of our discussion about this particular op-ed, one student in the class raised his hand and said that he didn’t like the op-ed. The TA asked him why, and his reasoning went something along the lines of, “I don’t think it’s a very important issue, especially not when compared to the rest.” (The rest in this context being presidential debates, drones, Syria, feminism.) Our class laughed collectively, probably partly at the honesty and partly because it’s not something you would normally say without cushioning in respectable society.

In my mind, what happens next is that I raise my hand after everyone is done laughing and say with a sweet smile, “I’m sorry, but I have to politely disagree. I’ve been to that school before. I have hosted those kids before, and I think it would be very difficult to find anyone who’s seen those children and doesn’t admire what this author’s parents do. I think it’s fine if you say that you don’t particularly care about this subject, I think it’s fine if you say that you don’t think this op-ed was well-written, but I don’t think we should write off the issue as unimportant. At the very least, we should respect that this author cares about this topic from a very personal angle.”

I did not say that. Instead, I laughed with the rest of the class, sat back and let the moment pass. I did not call him out on it. I, who knew this school, who knew these children. I did not speak up for them.
Why? Mostly, I think it’s because I didn’t think fast enough. In that moment, I sensed something wasn’t right, but I couldn’t put my finger on what. But I also ask myself, even if I had thought of it, would I have actually spoken up? In the context of a classroom with people who will never even remember this incident, does it matter if I spoke up or not?

As Duke students, we are presented with the chance to be at the table for conversations that have much larger repercussions beyond ourselves. In those situations, when do we have an obligation to speak up for those who are not present? Who gave us the right to be able to do that? I’m not sure. All I know is that in that moment, it mattered to me. It mattered that I didn’t honor those kids who once let me into their lives.