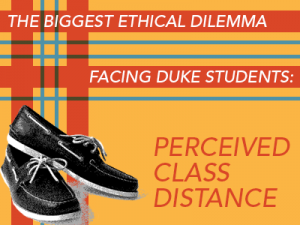 This post is the third of three selected as a winner of this year’s blogging contest. The author is an ECE and Physics double major, Pratt 2015, who has asked not to be named.

The dilemma I constantly experience when I am on campus is one caused by Duke’s diversity. Not racial, but socio-economic. I’m not even talking about only having friends who come from a similar financial background than you, but rather, having to think twice about talking about yourself for the fear of being judged. I’ve never actually felt being judged. My problem is with me judging others.

The point however, isn’t how we may segregate ourselves based on our economic backgrounds but how we judge people based on theirs. For example, I have several friends in fraternities from freshman year. I never considered going greek simply because I’d heard from someone that frat dues were a thousand dollars a year. A little too far beyond my budget. So based on this one not-so-trustworthy source and from what I saw of people joining the greek system I’ve come to associate that section of the student body with wealth and for some reason…I hate it. I hate my perception of so many people and I don’t want to judge people, but I do. And I’m sure I’m not the only one.

Whenever I come across someone who wears pastel coloured shorts and boat shoes (a surprising number of people) I have visions of huge trust funds, prep schools and exotic spring breaks. I immediately shy away from associating with them, thinking to myself “They’re too rich for me.” Now that I think about it however, I have no idea what that means. I guess I’m judging most of this campus based on how well they dress. And the converse is true too, if I see someone who looks like they’re not too well off, I feel a shared bond with them and am definitely more comfortable spending time with them than anyone I perceive to be more wealthy.

As I’ve come to realise during my time at Duke, I’m not special. So I know there are others out there who feel the same way I do; who associate with people of their own economic stratum but have this misguided feeling of being alienated by others. It’s a question I’ve tried grappling with but never found an answer to—Why do I feel alienated by people of a certain economic background even if I have never interacted with them? Even if I’m not entirely sure what that background is. And this I think is an ethical dilemma we all face everyday and will probably continue to face in our lives outside Duke.