Compost is the (Worm’s) Shit 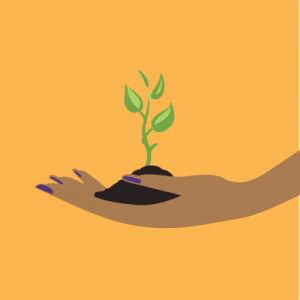 Our world is filled with innovation, creativity, knowledge, diversity, and garbage. Trillions upon trillions of pounds of garbage. In America, two hundred and twenty million pounds of garbage each year. Garbage that spills into our waterways, kills our wildlife, and pollutes our air, water, and soil. My solution: thousands of one-inch, slimy, wriggly, grimy worms. Just a year ago, I regarded these creatures as disgusting and filthy, but that same filth nourishes our soil and reduces our food waste. For my Girl Scout Gold Award, I tackled the issue of waste output by establishing a composting system and educational program for my community garden using the following six steps (while also confronting some issues of my own).

Step One: Build a compost bin and overcome a fear of power tools. Before the magic could happen, I needed to drill approximately 120 holes into giant bins to provide air for my worm counterparts. Having always been the last girl to be picked for a basketball team in gym class, it was empowering to know that even I could work a power drill.

Step Two: “Get over yourself” and collect rabbit droppings. There is nothing more humbling than shoveling bunny feces from a local farm into a five-gallon jug and lugging it back home. Enough said.

Step Three: Shred some Sunday Comics and learn to relax. With just a pair of scissors and a month’s worth of newspapers to cut into thin strips a page at a time, I felt fidgety. I kept imagining more productive things I could have been doing: volunteering, working, or socializing. As time passed, however, I found a meditative calm in this mind-numbing work. Even now, I take time to just sit and reflect amongst the chaos that is college.

Step Four: Buy some worms and get out of your comfort zone. For me, this entailed calling local farms and stores and instead of inquiring about produce or flowers, asking if they were selling worms: specifically, 2,000 of them. In one particularly awkward conversation, a farmer repeatedly said “you must be joking.” Such conversations, paired with my faint aversion to handling worms, placed me out of my comfort zone.

Step Five: Collect garbage and learn how to teach adults. A requirement of the Gold Award is that the project be self-sustaining. For this to work, I taught both youth and adults how to make compost from scraps. I originally thought when planning my project that working with the pre-school kids would be harder than with the adults. I was sorely mistaken. I wasn’t yet comfortable with instructing community members fifty years older than me; after all, I’d spent 17 years being instructed by them. My failure to give detailed instructions confused volunteers and caused one shoddy batch of compost and a few worms’ lives to be lost. Eager to ensure the compost’s survival, I revamped my directions and coordinated one-on-one meetings with the adults. The next batch of worm castings was a success.

Step Six: “Finish” the project and keep going. Even after presenting my project and receiving the Gold Award, I was not content. I had helped my immediate community, but I ached to go even further. This led me to teach my high school peers about composting and environmental issues. Turning to preschoolers, I created a composting educational program, and eventually made my way to the Governor’s Mansion to discuss environmental issues with my state representatives.

What started out as a community service project aimed to achieve the highest award in Girl Scouts ended up being an unconventional way of finding a new passion of mine. As I spent countless hours creating my composting system, every step and misstep I took seemed to reveal new issues toward self-actualization—interests, disinterests, strengths, soon-to-be strengths, and even a few weaknesses.

My point is: everyone can be active in preserving our environment, especially teens. Some people may not have the time or resources to compost, but there are other time efficient and inexpensive activities that will help preserve our environment such as recycling, taking public transportation or carpooling, and signing petitions. My aversion to worms kept me from digging in for years, but when I finally did, it was love at first batch. The physical aspect of sifting my hands through soil formed an instant connection to the environment and opened my world to the vast field of sustainability, a passion that I had never even considered before. Composting brought me liberation and empowerment and taught me to overcome my biases and try new things. So while worms (or really anything) may initially seem revolting, remember, don’t knock it ‘til you try it. So if you want to help preserve the environment and find new aspects of yourself, dig in!