Coming Out of the South (but not leaving) 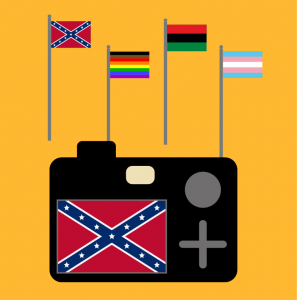 Since coming to Duke, my friendships represent wider geographic diversity than ever before. Coming from a small county west of Winston-Salem, North Carolina where the fact that neither of my parents had grown up there was a general rarity (anecdote: my best friend had the same fifth grade teacher that his father had twenty years earlier), my friend group at Duke embodies more geographic diversity than ever before. Along with these relationships, I have been closely shown to an outsider view of the South; during one conversation a friend said, “These kids come from bumblefuck North and South Carolina,” while another said they would not have spoken to me if I had a Southern accent. These statements contain assumptions about educational attainment, socioeconomic status, and attitudes towards race and sexuality which pervade in media throughout the United States; one being that rural living still dominates the South, another encapsulating an idea that Southern culture is bigoted—and an accent evidence of my embeddedness within that culture. While these statements are ignorant and ill informed, they are shared by many, the consequence of inauthentic Southern representation in national media. Media, in all forms, presents the South as the region of racist, sexist, xenophobic hillbillies, and we believe that image. We being everyone in the United States—the lack of authentic Southern representation in national media perverts the South’s own image of itself and hinders regional mobilization/efforts to transform the region.

Though no one said these things to me before coming to Duke, it is not the first time I have been exposed to them. National media is almost exclusively headquartered in the Northeast, so their stories often herald a decisively non-Southern view. This lack of Southern voices removes complexity from stories regarding the South. Interesting how much reporting occurred surrounding HB2 in North Carolina, without any reporting about actual trans folks in the state.  This may be because many queer people in the South don’t want to be discussed in news media. Being out in the South—the rural South especially—is often ostracizing at best and dangerous at worst. But if not the people, the organizations working to create a better South deserve discussion. There are inclusive organizations working to make the South more equitable for all, such as Southerners On New Ground (SONG) and the Highlander Research and Education Center. SONG has been working for twenty-five years towards “LGBTQ liberation across all lines of race, class, abilities, age, culture, gender, and sexuality in the South.” The Highlander Center has been working for 85 years as a “catalyst for grassroots organizing and movement building in Appalachia and the South,” persevering despite attacks against them—including the state of Tennessee seizing and selling their original property. While reporting focuses on policy, these organizations are ignored and most are left without any knowledge of them.

Reporting discriminatory legislation in the South is necessary, no doubt. This reporting is integral to keep the region abreast of the steps being taken to oppress diversity and dismantle historic legislation focused on equity, but I worry that only reporting about these new laws will prevent change. The constant oppression faced by minority communities in the South can seem inescapable, leaving citizens hopeless and looking to courts to change strike down discrimination, rather than encouraging action among citizens. A lack of reporting regarding work being done outside of the direct political sphere to change these statutes is hindering Southerners’ mobilization. We need to know about the organizations we can join, where to find the people working to create change, so we can come together. Social change does not come from the hands of a few benevolent lawmakers or judges (1), we need to take it into our own hands.

The potential to take change into our own hands is the core of the issue regarding media representation. A wholesale ignorance of the South’s multiplicity not only paints a poor picture throughout the nation, but also perverts the region’s image of itself. White men in power throughout the South are likely content with the current national media attention that focuses on what they are doing rather than what is done against them. The exploitation of power thrives in the absence of challenge; the more people fighting them, the less power current lawmakers will have. As we saw with the elections last November, people throughout the South will support more radical candidates, but in many areas the idea of conservatism is so pervasive that many Republicans remain unchallenged. With knowledge of the radicalism within the South, perhaps more candidates would be emboldened to challenge mainstay Republicans. But more significantly, information on the current social movements throughout the South would give citizens the knowledge of others in support of similar issues, and facilitate coming together in social movements – the real driver of social change. Knowledge of organizations throughout the South working to transform the region would provide the possibility for citizens in the South to congregate and instigate change.

I stopped caring (2) what outsiders thought of the South many years ago. I don’t care about the lack of national attention on revolutionary work done in the South because it represents a perverted image to the rest of the nation; I care because it hinders Southerners from learning about the work. While work can also be done regionally to inform citizens, national media has influence throughout the South and has the opportunity to help resistance gain exposure and support. We do not need outsiders to come in and solve our problems – we just need to know that there are other people here we can work alongside. That’s why I still care about how the people who live here see the South – we have the potential to change the South for the better—to make Southern hospitality apply to all regardless of gender identity, race, ethnicity, religion, sexuality, nationality, or ability level—if we are able to see how we can come together and build robust social movements.

There is no shortage of students at Duke eager to change the world after graduation. Dreams of going to Washington or a foreign nation, or working for the United Nations are a dime a dozen here. Few think about staying where they are though—and I’m talking about the students from the South specifically. Southerners make up a large percentage of Duke students, and we have the absolute privilege of powerful networks extending throughout the region and nation. So instead of leaving the South to create change, perhaps we should stay here. It can be a hard choice to submit yourself to a seemingly subpar life in a seemingly subpar region. It’s easy to leave the task to others. But there’s work being done in the South – so stay and contribute.

Notes: This post had its inception in a conversation I had with my DukeEngage Director, Matt Whitt, last summer. Matt is an editor at Scalawag Magazine, which was founded three years ago with the awesome goal of providing a space for creators and activist “to reckon with Southern realities as they are, rather than as they seem to be.” So thanks to Matt for having that conversation and thanks to Scalawag for providing a platform for learning about the South’s abundance of difference. Also thank you to my amazing high school teachers (you know who you are) for being the first to show me that you don’t have to leave the (rural) South just because you’re liberal.

(1) as much as public policy majors may want to believe