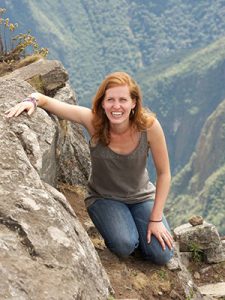 Cloe Franko is a senior organizer on the Challenge Big Tobacco Campaign at Corporate Accountability International (CAI), an organization that attempts to change corporate behavior through external pressure. Michelle Khalid, a Kenan Pathways of Change intern placed at CAI, conducted this interview with Cloe via email in Boston, Massachusetts. The following interview touches upon her early childhood and her transition into challenging corporate abuse.

Where did you grow up and what were your early years like?

I grew up in the Blue Ridge Mountains in southwest Virginia. While we don’t have enough coal in the Blue Ridge Mountains to mine, growing up there instilled in me the importance of the mountains to my community. When I learned about mountaintop-removal coal mining, taking place just a couple hours west of my hometown, I immediately felt the devastation such a practice caused to surrounding communities.

How did you become interested in issues of corporate abuse and specifically tobacco campaign? Did you work on other issues before focusing incorporate accountability? What explains the evolution of your interests?

My early activism focused on mountaintop-removal coal mining, where I began to learn about the divisive role the industry played in the community, but wouldn’t say I completely developed a corporate accountability analysis. Following college, I took a position with Green Corps, the field school for environmental organizing. Through Green Corps, I ran a number of quick environmental advocacy campaigns in various cities throughout the United States. After that experience, it slowly became clear to me that I needed to confront what I saw as the primary drivers of injustice in the world — corporations and the system that allows them to exploit people and the environment at every level.

The tobacco industry is an amazing industry to challenge because it is not only the driver of the largest preventable cause of death globally, but it also wrote the playbook that other abusive industries use to divert criticism and interfere in policymaking.

I run the day to day of our Challenge Big Tobacco campaign. This includes collaborating with the World Health Organization to strengthen and implement the world’s first ever public health and corporate accountability treaty, the global tobacco treaty, and supporting partners throughout the Global South to expose tobacco industry interference in policymaking and advance policies to protect against such interference.

What are the most rewarding and challenging parts of your current work?

The most rewarding part of my work is collaborating with amazing, dedicated public health advocates from around the world who bring so much passion and wisdom to our work. The most challenging is that corporations are getting more powerful in the world and there is always another issue to take on and another task to complete.

In what ways has your work at CAI changed your views about corporate accountability/business and human rights/social change?

In my time here, it’s become increasingly clear to me that corporations are gaining power in the world and it’s crucial that people and governments fundamentally change the systems that allow corporations to exploit people and the environment around the world.

What advice do you have for students who want to work in the area of business and human rights?

I recommend students wanting to enter this field to consider what they see as the worst human rights abuses in the world and seek organizations that are addressing those abuses at a systematic level.