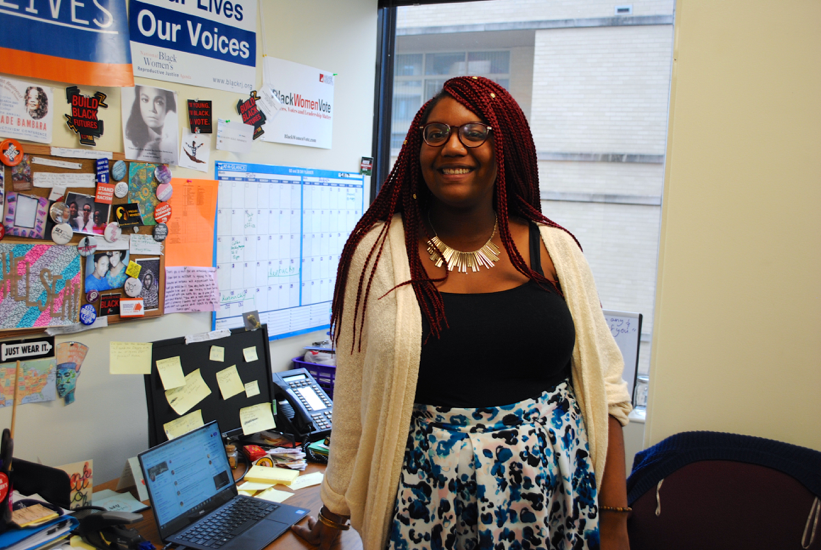 Chelsea Yarborough is the Senior HBCU and Southern National Campus Organizer with the Feminist Majority Foundation. A 24 year old transplant to D.C. from the not so deep South, she was born and raised in Durham, NC and is a recent graduate of Guilford College in Greensboro, NC, where she earned a degree in History and Women’s, Gender and Sexuality Studies.

In her undergraduate career she discovered a love of organizing and community engagement, working with student groups such as Sexual Assault Awareness, Support and Advocacy (SAASA) and the Greenleaf Coffee Cooperative, as well as working as the student assistant for the Women’s, Gender and Sexuality Studies Department. She also worked with community organizations such as Planned Parenthood, Ignite NC, and Democracy NC. A proud womanist, Chelsea centers her work on bringing those on the margins to the center, building collective power, securing collective liberation in our lifetime and finding creative solutions to dismantle current power structures that place women of color at a disadvantage. Her research interests include historical preservation in the American South, reproductive justice and sexuality education reform. She is an avid lover of cats, espresso, cheese and purple. Lots of purple.

Sydney McAuliffe:  Where did you grow up? What were your early years like?

Chelsea Yarborough:  I am originally from Durham, North Carolina—My mom was a cosmetologist and my Dad was an Army vet. When I was three, they divorced and my mother, older brother and I moved to Durham. I was always very curious. I read a lot and loved books. I attended Durham School of the Arts for high school where I was a theatre student. I loved theater and performing.

My mom said that I was very spirited and very independent as a child. They like to say that I was the one kid in the family they never had to worry about anyone messing with because I would always just tell someone off if they were messing with me. I think it set me up to grow into the loud outspoken Black girl I am now.

SM:  What is your educational background?

CY:  I went to a performing arts high school thinking I would eventually be on Broadway. That was my goal. I was very close to attaining that goal and received a scholarship to attend a theater conservatory in New York City and was all prepared to go. But because I was the youngest girl in my family, my family didn’t feel comfortable with me going that far away. I gave up the scholarship and applied to Guilford College in Greensboro. I ended up liking Guilford and decided to attend the college.

I grew a lot politically at Guilford. I attribute a lot of that to Quakerism because Guilford is a Quaker school. The social justice focus in my education at Guilford was transformative for me. I came in originally as a Theatre major and ended up picking up History and Women’s Sexuality and Gender Studies and never looked back from there.

SM:  What did your path to women’s rights look like?

CY:  When I was a freshman in college, I was raped. I became involved with women’s rights by just dealing with all the things that came after the assault— like learning that Greensboro had only one SANE Nurse (Sexual Assault Nurse Examiner) for the entire city, realizing how expensive it was to have a rape kit done and dealing with the pressure on campus. I felt like I was alienated on campus. It propelled me to find a space on campus where I could be at home. Women’s Gender and Sexuality studies felt like a natural segue. In college, I was also part of a Coffee Co-Op that was the first student worker-owned Co-Op in North Carolina. That was a political home for me. I learned that there are alternative processes of things that exist and that you can put in place to stop the harm of the systems of oppression that have been put on the world and us as people.

CY:  I am the Southern and HBCU National Campus Organizer with the Feminist Majority Foundation. I currently organize in about 12 states from Kentucky to Texas. I also work with about 6-7 schools in the HBCU network. I would say 50% of the time I am cold calling people and checking in with people to see how projects are going, conducting research, sending packages and then the other 50% is travel and running campaigns. For example, during the 2016 election, we ran different voter engagement campaigns in our target states. I ran one in North Carolina, and that took up a big chunk of my time.

We also travel up to 10 weeks of the year, so we are constantly visiting campuses to see how the groups are doing and seeing if there is anything we can assist them with on the ground. We also meet with community partners, faculty, staff, and campus administrators and local organizers.

SM:  What are the most rewarding and challenging parts of your work?

CY:  I appreciate the training aspect of this job. I find a lot of joy in training and developing trainings that gives people the hard skills they need to keep their groups afloat. I love setting up trainings in a way that people feel like they can take the knowledge I gave them to train others. Regarding challenges, I love traveling, and I hate traveling. It is cool that I have been able to see so many different parts of the country through this job, especially in this political moment, but it gets tiring.

SM:  In what ways has your work at Feminist Majority changed your views about women’s rights?

CY:  I think that coming of age under the Obama administration was formative because it showed a lot of us that black people could reach the highest heights in achievement. I think of this because many people unfairly assume that once we put a marginalized person in a place of power, then we have made it and there are no more issues. But clearly with the Obama administration that was not the case. I think it has become a lot more apparent to me that the goal of my organizing has been not to just put people of marginalized identities in places of power to contribute to a show of progressivism but rather to change the conditions to ensure that everyone has access to collective power.

SM:  What skills have helped you most succeed in advocating for women’s rights?

CY:  Quakers taught me a lot about patience. I think that I am much more patient now and that has been a big skill.

I am very into astrology and my sun sign, Aries. I think that I embody a lot of the characteristics of my sun sign, which means I am very stubborn. I appreciate being gifted with the resolve to not back down from what I believe in.

I also think that the gift of discernment has been very helpful as an organizer. I think that sometimes you want to take on everything because there is so much to do and being able to discern where I can make an impact and what is most expedient is helpful. You burn a lot of energy when you are trying to climb this huge mountain when you can just attack it rock by rock.

SM:  Who or what organizations do you look to as leaders in the women’s rights field?

CY:  I appreciate the work that Black Women’s Blueprint is doing. They do a lot of work on issues about black women and sexual violence. I think it is really powerful to gather healing work and organizing work because they are complimentary and one in the same. If you don’t heal the external forces of oppression that we’ve internalized than we can’t do anything truly transformative.

I am also going to be shameless and plug my organization called Black Youth Project 100. I dig the black queer feminist’s lens that we operate on. I have never been part of an organization where all of the leadership is black queer folks and seeing the scope and breadth of the work we’ve done across the country is really awesome.

SM:  What is the biggest opportunity we have in the current political moment for women’s rights?

CY:  I think there is a pressing need to solidify the link between racial justice movement spaces and women’s rights spaces. When we don’t keep those links clearly defined, we let whole groups of people fall through the cracks and leave them out of our vision of liberation. I think there is a golden opportunity for us to bring both those movements together especially when it comes to reproductive justice (RJ) and the Movement for Black Lives-many of the things we name in the Movement for Black Lives encompass RJ but it’s never explicitly named as such. I think we are at a very crucial moment to make those two connections.

I think there is a very critical need for the women’s rights movement to examine its own racism, which it has not done yet. What is a mass way for us to examine the failings and shortcomings of this movement in terms of how it has disadvantaged black women and women of color? What can be done moving forward to actually talk about what solidarity looks like? I think that a lot of words in today’s time have become really buzzy like “solidarity” and “resist.” But what is the actual action behind them? Who are you actually accountable to? If you are not actually in communication with black people—how are you accountable to black people. How are you working as part of a movement to be intersectional if you are not talking to black people? That feels like the biggest challenge right now.

SM:  What kind of future do you see the women’s rights movement heading towards?

My goal is to organize myself out of a job. If I have organized myself out of a job that means that we have what we need and we don’t need organizations to come in and organize people to secure what we need. That is what I am hoping the future of the field looks like— I am hoping that eventually there are no jobs organizing for basic human rights, because the work we’ve done will have made sure that’s a reality rather than a far-off goal.