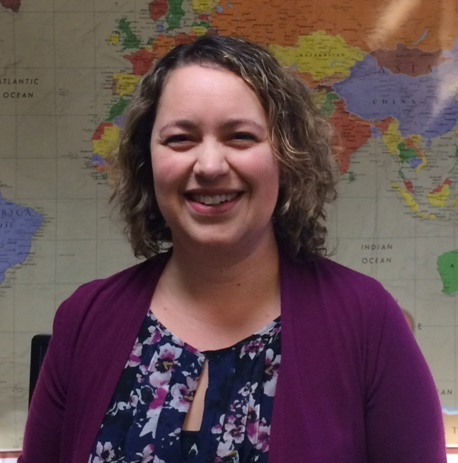 Cassy Creekman is an in-house attorney for SAS Institute, working within the Ethics and Compliance department of the Legal Division. Her primary areas of focus include Export Controls, International Traffic at Arms Regulations (ITAR), and Corporate Social Responsibility. In this interview, we discuss her journey and the role of corporations in the human rights space.

Carolyn Chen: Where did you grow up? What were your early years like?

Cassy Creekman: I grew up in a small town in northern Wisconsin. When I was young, it was me and my mom. I also spent a lot of time with my grandparents who lived out in the country. I knew from an early age that education was the key to leaving my small town and being exposed to new people and experiences.

Carolyn: What is your educational background and at what point did you decide you wanted to go to law school?

Cassy: I went to Duke, where I participated in the Globalization and Cultural Changes FOCUS my first year. Half of the students in my FOCUS were international students. Having come from a small town, I was especially interested in gaining a more international perspective. I also discovered that I liked economics- I was fascinated by how it is an empirical discipline but tries to describe human behavior, which doesn’t always work as well in practice as it does in theory! There are three classes that I would point to as sparking my interest in going to law school: a law and economics class, an international law class, and an environmental policy class. Those issues still impact the work I do now. I then attended NYU Law School, where I took more international law classes.

Carolyn: What did your path to business and human rights look like?

Cassy: I began my career in international arbitration. Two countries that I focused on early on included Argentina and Venezuela. Both were in the process of nationalizing their energy companies and taking ownership over private energy companies. In addition, Argentina had defaulted on its national debt. I had studied abroad in Argentina while in college, and I immediately thought about the citizens there that were being affected by the economic crisis and the fall of the banking system. However, I also had to consider the rule of law and the ethical balance there- perhaps the government shouldn’t use all its money to pay the debt it owed to foreign companies but the government also cannot just follow the law when it is convenient and not repay its debts. I also worked in M&A and Venture Capital law before transitioning back to North Carolina. I joined the Ethics and Compliance department at SAS because the job description was most in line with my background in international law. I currently focus on International Traffic at Arms Regulations (ITAR) and Export Controls, as well as Compliance Training, Corporate Social Responsibility and the Code of Ethics.

Carolyn: What are the most rewarding and challenging parts of your current work?

Cassy: Every day is different, and I am always learning, which I find very rewarding. I deal a lot with comparative laws and learning about the legal systems of different countries, especially with respect to trade controls. I also get to work with many different divisions within SAS. I regularly work with Research & Development and have learned more about encryption and how software is built. In addition, I work with Sales, Human Resources, Legal & Contracts, Finance, and other SAS subsidiaries throughout the world. This is both rewarding and challenging; I get to touch multiple areas of the company and collaborate with other divisions but I also must be up-to-date with the many different forms of regulations that these divisions face.

Carolyn: In what ways has your work at SAS changed your views about business and human rights?

Cassy: I think my work has made me more deeply consider the role of the government and policy. There are many regulations in place for corporations, but if they are implemented in an impractical way the regulations are not useful. For example, if the government provides databases with individuals that are considered human rights violators (terrorists, arms traffickers, etc.) that companies cannot do business with, that database needs to be properly maintained. Or if there are regulations on data privacy, those laws should be updated as technology advances rapidly. Also, I think about how companies can achieve policy aims while being more efficient with their resources. For example, a great deal of time is spent on due diligence of companies that SAS does business with, but other businesses may have already done the due diligence on those companies. It would be more efficient for companies to not each do its separate due diligence on the same entity, since the due diligence standards are rather uniform. I think often people believe regulation is a binary issue- that companies always want no regulation and that more regulation is always better. But I think the issue should be how to regulate more efficiently. Sometimes it’s easy to forget that corporations are made up of individual people, and that people generally want to do the right thing. Business and human rights may seem to be at odds at first, but if we can find ways to align company goals with good human rights practices, those types of changes are long-lasting and mutually beneficial.

Carolyn: What advice do you have for students who are interested in business and human rights?

Cassy: Human rights is a broad field, so I would suggest to start by finding human rights issues that are personally important to you. Try to define for yourself what problems in society get your attention, and don’t start by putting yourself into a certain category. Next, look at the players involved in that space, whether they be businesses, non-profits, or governmental institutions and consider their different goals. I would suggest trying to gain different perspectives on the same issue. For example, if you are passionate about environmental justice, maybe consider working for an energy company for some time to gain a new understanding of the issue of natural resource extraction. There are often business interests involved with human rights issues and you will find that some human rights issues are more complicated than they appear. It is important to consider the different stakeholders in a space and the goals they have in order to identify the best solutions.