“But what are you REALLY going to do?” 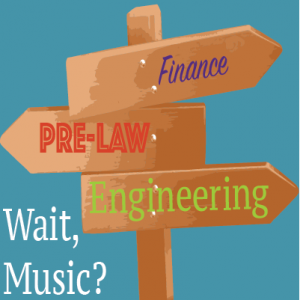 “But what are you REALLY going to do with your life?”

“But, like, why would you come to Duke if you want to go into music? Why wouldn’t you have gone to NYU or something?”

I get these types of questions on a pretty regular basis from other students, family members, prospective students and their families, etc. Don’t get me wrong: I understand them. It is a little out of the ordinary that I chose to come to Duke–a research university generally known for things like science, public policy, and economics–to study music. And no, I’m not a music major and pre-med or pre-law or pre-anything else. In fact, I don’t have a career path more defined than a vague the arts just yet. As of right now, I am a music major, and I intend to pursue the arts professionally. I’m going to have a degree in music from Duke, not from a conservancy or an ‘artsier’ school, on my resumé–but I have a feeling I’m going to be just fine.

I began the college search process unsure about what I would want study but thinking about chemistry, Spanish, pre-med, and music. I started off my college search Georgia Tech, a university close to home known for engineering, science, and technology. Although I thought the campus was beautiful and the location was great, I decided that even if I did end up going down a science path, I didn’t want to go to a school with a bunch of people studying the same types of things. I wanted to be in an environment where I could be stimulated and challenged by those with different skills, areas of interest, and perspectives – and that’s exactly what I found at Duke. I believe that Duke’s commitment to interdisciplinary learning is as true as the beautiful admissions flyers say it is. The student body, full of students majoring, minoring, and earning certificates in all sorts of nontraditional combinations, reflects this sentiment.

And what about after I graduate? Get this–people do actually go into the arts and have “legitimate” careers! Crazy, right? Being a music major doesn’t mean I’m going to go be a professional concert pianist, a path that could be quite difficult to ‘make it’ in (and one that I don’t have any interest in). But a plethora of jobs in the arts exist. According to arts.gov, the website of the National Endowment for the Arts (which is terrifyingly in danger of being eliminated by the Trump administration), the Arts & Culture sector of the US economy accounts for $742 billion (4.2%) of our GDP and “adds millions of jobs to our workforce (more than two million full-time artists and nearly five million arts-related jobs).” Almost all of us at Duke engage with the arts in some form – attending concerts, taking music lessons, seeing theatre productions, listening to the radio, watching movies, playing the beautiful Steinway in the new Student Wellness Building – and there are, in fact, millions of jobs that go into making those things possible.

Even though there may be 10x as many Economics or Public Policy majors as arts majors at Duke, and although it may seem a little out of the ordinary for me to be studying what I am, I think Duke truly is a great place to be an arts major. It allows me to take classes like The Arts and Human Rights, or Arts, Theater and Film Arts Entrepreneurship and Social Policy. It gives me greater freedom in thinking about what lies ahead of me and how I can do what I love while making a positive difference in the world. I wouldn’t rather be anywhere else.