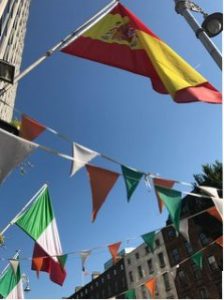 Over the past few weeks, I have worked at a transitional school that helps unaccompanied, asylum-seeking minors prepare for Irish secondary school. Work means spending considerable time with students, day-in and day-out—offering classroom assistance, 1-on-1 tutoring, sports after class, field trip supervision, etc. Despite spending all this time together, I don’t actually speak the same language as many of the students. Moreover, the fact that they come from a range of diverse places including Iraq, Syria, Angola, Democratic Republic of the Congo and Venezuela means they often don’t speak the same language as each other. Not surprisingly, our time together is filled with large misunderstandings that require much effort to undo. Even making the most basic of requests can be challenging—for both parties. I, as a teacher, desperately yearn to reach a point of understanding with the student, that at once helps the student and validates my contributions to the school. For their part the students grapple with my words, thoroughly puzzled yet determined to provide an accurate response. They make this effort because they so desperately want to realize their own academic possibilities.

These challenging interactions have pushed me to rely on behavioral rather than verbal reasoning. I try to reach a point of understanding with the students by focusing on the emotional and psychological reasons behind their actions, and accommodate and respond to those as best I can. In this way, I feel as though I am better able to get the feedback I need to help them get to where they want to go.

I consider why and how they say what they say as much as what they actually say. I get to know what they like and what they don’t like, their sensitivities and their strengths. In my experience, the feedback gathered at this level allows me to understand them better as human beings (regardless of language). It has also proved to be very useful in establishing trust among the group. This trust is a key in facilitating open, attentive, and earnest conversations between myself and the students.  In short, it has made it possible for the students to be at ease with me. With this kind of relationship, I am able to move amongst the students with ease and free from the suspicion that can sometimes cloud their judgment of new adults they meet. More importantly, I have been able to create meaningful bonds with students where I might otherwise have been limited to impersonal interactions.

This is not to say, that I have discovered the secret to teaching, but rather to highlight an underrated aspect of engaging with students, especially ones coming from such different backgrounds. In an environment where consequences are rarely clear and student engagement is optional these kinds of relationships can lead to a willingness to lean in and an eagerness to learn.

Establishing trust with the students means being open to what they have to say, refraining from condescending judgments, and constantly trying to put oneself in their positions. The effort is well worth it. I have seen students develop legitimate attachment to their instructors and a clear desire to pay that same respect back. With students from such radically different cultural backgrounds this desire takes many forms. One of my students insisted on buying me coffee after one extremely honest conversation. He knew that I was genuinely looking to understand him.  This was the reason he responded with such warmth. Another student surprised me by trying to give me a 10-euro gift—a staggering amount of money given his 20-euro weekly allowance—following a series of highly stimulating, but very off-topic conversations during math class. He wanted to know all about my life in California.  He expressed a desire to travel himself. The incredible enthusiasm with which he talked about these things made it impossible to ask him to stop. Instead, I would wait until he finished, offer serious words of encouragement, and then move on. Here and elsewhere I was trying to send the message to my students that I value their wellbeing as much as I care about their performance in the class.

Of course, flattering as they are, these gestures of generosity on the part of my students are not my goal. Rather, this energy and their desire to reciprocate often leads to something more—an invigorated class environment. Students try harder to engage with instruction once we establish a relationship of mutual respect and consideration.

I understand that this practice can be tricky. I also understand that if this is done poorly, the line between teacher and friend can be blurred. Finally, I also realize that students need to get in the habit of responding to respectfully to authority. However, in an environment that, despite our best efforts, students are frequently misunderstood and increasingly isolated from the channels of self-expression these basic human connections can go a long way. In the school, students have often been uprooted from their homes as well as the emotional resources associated with family and community. Consequently, establishing oneself as a someone who can be trusted to be human amidst a sea of unfamiliar faces can endear a teacher to a student in ways that are truly powerful—even in a classroom setting. Students profoundly appreciate being made to feel comfortable.

At the end of the day some people may well agree with that there is a need for these kinds of human connections, but object to the idea that this should occur during instructional time, like it did in that math class I mentioned. To those people I say, the benefit of gaining a student’s trust, in my experience, has generally outweighed the marginal improvement they could have made with their long division in that time span. My brief time at the school has led me to believe, if you have an opportunity to reach that level of trust with a student, you take it. 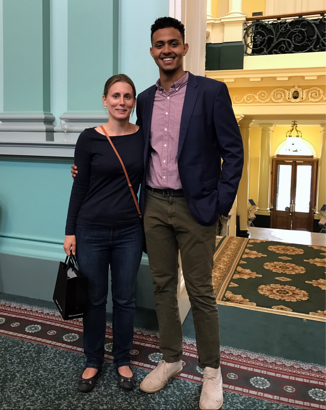 Now that we’re in the last week, and I’m finishing up my research, I find myself reflecting deeply about what kind of impact my research report will have. Since I was in high school, I always imagined my contributions to the world through the lens of a hyper-competitive academic setting. How can I prove myself worthy? How can I up my level of prestige? What scholarships can I compete for? These were the considerations that guided my decisions and determined my involvement with the world.

Yet, given the task I was assigned with DukeEngage, for once, these considerations went by the wayside. The foreign environment and the projects over emphasis on each Duke students’ individual experience meant there was literally nothing else I could concern myself with, no ulterior motive, no maneuvering to capture some level of prestige, just me and my project. In this context, my focus began shifting sharply towards the impact of my work. How is my research going to improve the lives of individuals? After all, this report is to be the cornerstone of my entire summer and the subject of much of my thinking.

Based on what I’d heard, this report had the potential to provide very practical information to the organization I am working for. My analytical training at Duke could bring to light some of the more nuanced issues behind what the Separated Children’s Service experienced on daily basis. More ambitiously, this report, in all its cutting-edge foresight, could perhaps inspire the policy changes that would facilitate better employment outcomes for future migrant students. This prospect, that my services would be invaluable to the achievement of some goal, I remember was at first exhilarating to me. In fact, I believe it may have been what originally drew me to Duke Engage. It was an affirmation of what I had been molded to think my whole life—that my academic streak would bring me unparalleled fulfillment in life, in ways that others could never get. Without this academic component of my work, I can imagine my disappointment and the concern I would feel that the organization would not be getting as far as it could. But as I closed out the last of my interviews, I realized that this framework was simply not holding up.

The students I interviewed came from all over the place and experienced a humongous range of success. One had never worked a job a day in his life. Another had gone on to get his Masters degree from UCD, and was applying to earn his PhD when we spoke. What unified this diverse set of individuals were two names: Andrew and Manuela. Every single student, without exception, could recount detailed stories of a time when these individuals felt like a saving grace. In fact, the reason I experienced so much facility getting people to agree to interviews was because they felt like they were doing it as a favor to these two. Both of these individuals had spent countless hours working with students in a one on one setting, trying to be as helpful as possible. They didn’t always have the resources to make something happen for a student, but god damnit they tried. One student nearly brought us both to tears as he remembered a time when Andrew fronted him half the money to pay for his nationality card. The impact that they were able to have on so many lives was beyond words. It was tangible, it was meaningful, and it fostered the sense of deep human connection that most individuals encounter only a few times in their life.

In the end, I barely worked with the two of these individuals. My time was spent bouncing around from the school to interviews, and back to school again. But through a mere 35-minute interaction with the people who knew them, I developed a tremendous respect for the work that these two do. From what the students mentioned, this was the kind of support one would offer almost exclusively to a member of their immediate, nuclear family. Yet, the empathy and diligence with which Andrew and Manuela carried out these tasks made it seem as though it was a part of their duty.

Before Dublin, I could have never begun to imagine investing so much of myself into individuals on a daily basis. I, perhaps haughtily, thought my knack for analytical thinking could save me time doing trivial tasks that didn’t require a high-level thinking, while achieving the same or even better outcomes. But reflecting on my paper, as proud of it as I am, I have humbly learned that my impact is mere busy-work compared to the countless hours of empathy-filled support students receive from Andrew and Manuela. And more broadly, that sometimes, the most far-reaching impact can be had without any of the literature reviews or analytics, but with a heart of compassion and the selfless commitment to do good by others.