“You are a subject, not an object… You don’t have to be Edna, you have to be you.”

Professor Rula B. Quawas’ voice rises as she finishes her point; her students nod and hum in agreement. She is a short, older woman with short brown hair and dark glasses. Her accent is a mix of Arabic and Irish.

Our Immerse team sits along the back wall of her classroom in Jordan University, taking down notes and nodding in agreement with what Professor Quawas is saying. The classroom is large and white with six rows of chairs. There are no personal touches, besides three stock images displaying destinations of clear blue water, white boats, and stone castles. The majority of Rula’s students sit in the front three rows, closest to her and the white board. All of her students except for one are women. The students are discussing their assigned reading, The Awakening by Kate Chopin, an American novel which Quawas uses to explore messages of self-empowerment and independence for her female students. She stands in the front of the room by the white board, pointing her fingers at her students and emphasizing certain points.

“We have to rebut, to contest, and to challenge. The roles prescribed by society… fundamental institutions that breed oppression… those we have to change.” As she says these words, several of Professor Quawas’ students nod and hum in accordance.

As a young female studying at a liberal university like Duke, I still found myself nodding and humming to what Rula is saying. Her words resonate in my ears, and I underline certain words like “wake up” and “fight” in my notebook. While her female students confront how this American novel relates to their Arab culture, I found myself in awe of how much I personally need to hear this message. Too many times, I take for granted the liberal education I have been given – an academic education that prides itself on its students’ achievements, but not necessarily on the people they are becoming. Rula’s course reminds me of the bridge that must we as students must build between these two points – our achievements and our personhood. We must develop these two aspects of ourselves, cohesively. Despite the pressures and “breeding” by Duke to become the highest achieving students, our success cannot take precedence over our development as human beings. At Duke, I recognize that I struggle to build this bridge and feel that I am sacrificing my personhood over my academic success. At the expense of getting good grades, I lose what I love as a person – time with friends, conversation, and company.

Rula explains, “The only bridge you build is to you and yourself.” She makes possible to her female students the idea that they can explore who they are beyond the roles of wives and mothers that have been prescribed by traditional Arab culture. This is a profound idea, and while Rula applies it to the context of her students’ lives, I recognize the need for similar bridges to be built at Duke. As a Duke student, I must build a bridge stretches from my academic goals to my personal goals, or in other words, my “heart goals.” I have to bring the two together in one frame. It is my responsibility, not the institution’s.

Rula shares with the class that she knows that several of them are wives and mothers. Recognizing these new social roles, several of them connect the novel to their personal lives. Commenting on their personal narratives, Rula uses the example of Edna, the main character in The Awakening, to encourage her female students to take time for themselves beyond their familial relationships. She ties the novel to the words of Ralph Waldo Emerson: “Follow the beatings of your own heart.” I know that more Duke students, regardless of gender, could use her message and claim their efforts and energy. This does not mean they give up on the major or activities they want to pursue, but rather, they refuse to allow for these pursuits to consume them.

Duke students, myself included, need time to develop themselves as people as well as their resumes. We all need more Rula in our lives.

When our Immerse team met with a UN officer here in Amman, he shared that in every meeting he attends, he is expected to know all the facts about the region he manages. It seemed to be a theme between aid organizations and government negotiations that we have met so far –  success is measured on knowing all the facts and having the necessary numbers. There is an expectation for these UN officials to come to each meeting prepared for discussion, just like the existing expectation for these aid organizations to be making a mark on their communities. And where do these UN officials and agencies receive their facts? From the partner aid organizations that they fund. It’s an endless cycle. A cycle that has turned humanitarian work into a competition.

It seems ironic that agencies call themselves “partners,” when in reality, these agencies lack all cooperation. From what I have observed during my time in Amman, these agencies are so focused on the prospect of receiving monetary support that they risk working together for the benefit of collaboration. Even more, it seems that this hyper competitiveness does not end between these aid “partners,” but transcends to all levels of the humanitarian sector.

Walking into the Jordanian headquarters of one of these refugee agencies here in Amman, I was amazed by the hundreds of folded bright red and navy backpacks that were stacked along the floor and up against file cabinets all throughout the office. The headquarters’ main office was comprised of a large white room, but the space felt cramped and cluttered with all the different school supplies and cardboard boxes. These backpacks were to be distributed to the agency’s students, who were currently enrolled in its twenty different informal schools throughout the country of Jordan. With the influx of refugees, hundreds of schools have been created to compensate for the lack of schooling that Syrian refugees receive from Jordanian schools, and humanitarian agencies supply these schools and their students with supplies. Along the walls of the office, several large images of smiling refugee children were hanging, with the blue UNICEF logo printed in the right hand corner of the picture.

When we asked the Programs Manager about whether this agency and the rest of UNICEF partners collaborate in their work to provide for these Syrian students, she told us no. Each agency is working towards receiving the same grants, so in a sense, it becomes a competition as to who will receive the most funding.

Listening to the Program Manager explain this reality, I was immediately struck by this idea of a “competition” between humanitarian agencies. But then I realized that this was a theme between aid organizations and UN officials. The expectation to perform has stifled collaborative progress on all levels of the humanitarian sector. What does this mean for the future of the international humanitarian world? I am not certain. But I do recognize that this hyper-competitiveness has put extreme pressure on these agencies to not only perform, but focus on the quantitative measures of their charity work, not necessarily the qualitative. 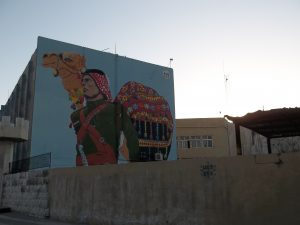 “Standing right now. You guys don’t know the situation. We are just actors here. There is a big, big people playing with all of us. Even you.”

Muhammad’s voice rises as he talks, and his thick, wrinkled olive hands tense up. He is an older man with thick black-rimmed glasses that frame his large brown eyes. Wrinkles have formed across his forehead and bags beneath his eyelids; they deepen as he talks. His age is evident in his droopy eyes, and when he speaks, a long history of smoking can be heard in his deep, raspy voice.  He pulls out a laminated, green Syrian ID card from the coat pocket of his thick charcoal robe, and explains, “I spent four years here, it looks like fifteen years.”

Muhammad and the other refugees we interview in Amman, their lives will continue after the Immerse team leaves Jordan and so will ours back at Duke. But for one brief moment, our erratically different paths intersect here in Amman. Despite the very different positions that we occupy in this world, as “university students” and “refugees,” we are able to truly encounter each other in this moment. In this moment, we see the humanity in each other.

Muhammad turns towards the Duke Immerse team and adds, “I dare you. If they can do anything. Because if they want to try to win the media, telling the people the truth, they are not going to allow them.”

The truth is that these refugees and their families do not feel at home in Jordan. They are no different than you and me, but because of where they were born, their lives have been forever transformed. The big players that Muhammad speaks of are in control of his safety, not him, and the only thing he desires, it a new life. For some refugees, like Muhammad, a new beginning will come when they can return to their home countries. For others, they are seeking a new beginning through resettlement.

Muhammad’s dare forced me to confront the purpose of my experience here in Amman. I recognize that as Duke University students we have been given this opportunity to understand the refugee situation in Amman; those words have been programmed into our interview protocol. But why do we continue our work? In the global refugee crisis, we play a very small role. But can even the small players make a big difference? Our Immerse team is consuming these refugees’ stories in order to share them with another audience halfway across the world. But why?

As this question continuously probed me, I started to realize that my purpose here is not as big as changing the media’s mind, but rather recognizing where are the smaller battles of ignorance and prejudice. As the Immerse team, we are the microphone for a voice that is currently lost in the conversations around the Oval Office. Progress has to be made in steps, and the first steps happen in our innermost circles at Duke and with the families we meet through Mastery.  Change will begin to happen as soon we step off our plane in Durham, North Carolina. With our monologue show in April and Immerse magazine, we will continue to fight on behalf of these unseen populations and hope that these stories can make their way from their home in Amman to Durham and beyond.

As Muhammad closed his interview, he shared, “I respect you, all of you, as Americans. Not America, but as Americans because… You are very kind and you guys trying to search for the truth. But sorry because most of the people, they couldn’t reach it. The truth.” As members of the Immerse team, we are responsible for telling the truth. We will not be able to change the national narrative alone, but informed opinions are better than “alternative facts.”