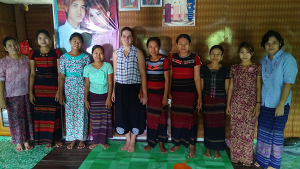 My previous blog felt like an entangled reflection on a world I know little about– a practice of hesitating to pose unanswerable questions but feeling free enough to ask them anyway. Now that I’ve batted around the idea that NGOs and governments are competitive actors in the development arena, I realize that maybe I left out a larger question that would help to answer my other ones. Maybe, in fact, I have been leaving out this question all along in my research this summer:

A colleague from Mercy Corps told me a story on one of our long car rides last month. We were discussing the merits of community-driven development. He said that one man was complaining that lots of young people from his village went to work in cities like Yangon because they were more developed. The man then exclaimed: “I do not want to go to the city. I want to build my village into a city.”

What is development? Is it skyscrapers and cinemas and malls and sidewalks? Is it banks and shops and restaurants? Is it equality and safety and opportunity? Is development happiness?

When we ask about goals for development, I think what we are really driving at is what kind of equality we want to exist in the world. Amartya Sen famously wrote about equality of opportunity– that every person should be able to achieve the same thing because they all have the same opportunities to succeed. Development, however, seems to push more in the direction of equality at the base– not that everyone has the same thing, but that everyone has enough. Enough food, medical care, education. But who decides what is “enough”? Is enough enough, ethically?

So, again, what is development? Is it big cities (and with them, more pollution, I would add)? Is it that every girl and boy goes to school? Or is it GDP per capita?

I remember as a kid wondering what criteria made a country “developed.” When did you get to jump across that threshold from undeveloped to developed? Returning a bit to my blogs on culture, it appears that development (as developed, i.e. mostly Western, countries seem to see it) also requires a baseline of acceptable or ‘correct’ culture. If a country wants to develop fully, many NGOs say, for instance, it has to give women human rights. As basic as this idea seems, in many countries it requires a huge shift in culture.

I suppose that is fine, particularly if it advances goals of equality and human rights. But it’s also a slippery slope. Could development be masquerading as an attempt to convert other countries to a “better” way of living in the same way that missionaries aim to reform people’s religion to make their lives “better”?

Here’s another way of posing my question. Are cities inherently better than rural villages? Perhaps not, but having access to education, capital, healthcare, and employment is better than not having access to those things. When that man said that he wanted to make his village a city, he revealed what lots of people envision as the end-goal of development. Infrastructure. Wealth. But it’s important to remember that in cities in developed countries all over the world, economic inequality is thriving. Some people are homeless while others live in lavish apartments. To say these cities (D.C., or Durham, is a good example) have reached the standard of “development” is disheartening. Not everyone is equal, and certainly not everyone has “enough.”

There are certainly places in the world we can look to that have equitable and just societies, but nowhere we look is a gold standard. Furthermore, looking to a rich country (Norway, for instance) as a goal to which all societies should strive toward sounds a lot like a desire to make the world homogeneous. And whether cultures, in all their colour and complexity, can survive in the process of development is hard to say. Even if we define development as not getting richer but rather getting more equitable and fair, it is unclear what standard we are hoping to reach. Furthermore, the hopeful language of ‘equity’ (the path to equality) might be a mask for the fact that real equality is near impossible. Who controls a country’s way of life depends on whether people have power. Even in democracies, segments of the population are left disenfranchised and powerless by the state. Individuals’ decision-making power seems limited in even so-called high-functioning democracies, let alone in developing countries that hope to create a more just and equitable world. This idea is perhaps the most wrenching–when a developing country is re-creating itself (as Myanmar is currently), how many of its citizens are real actors in that re-creation? Are their voices too small to demand “enough”?

At the end of my research, I spent six or seven hours one day brainstorming with my supervisor about the report and our findings. We wrote phrases and key points on sticky notes and stuck them on the glass walls all around the room. After hundreds of notes were up like roof shingles we stepped back. Then we moved them all around. We wanted a “theory of change” for women’s empowerment and leadership through CDD projects. We hoped to develop a theory that set out clearly “if x, then y” and “if y, then z” until we reached basic equality. This exercise required that we had a clear vision–an end goal. (Even in this vision, we left things out that were beyond the project’s scope– we couldn’t address domestic violence, for example.)

Is there a similar theory of change for development? Furthermore, shouldn’t the people themselves be the ones to develop it, not some outsiders who claim to be experts?

I didn’t enter my summer with enormous ethical questions about how society should function. I entered it with pointed queries about how and why women should be decision-makers in their communities. The fact that I started there–with rural women–and ended up here–with questions about global development, speaks to how the framework of ethics can be a connector among many topics. It shows that you can never focus on a narrow subject without stepping back and acknowledging the wider context.

So the question remains with me– what is development, and what are its goals? I think no matter how we define it, we have to include women in the picture, as they’ve for too long been pushed out of the frame. With parents who have worked in development economics for most of their lives, I have been exposed to a lot of different places, and I asked them lots of questions about their work from a young age. I understood their basic initiatives (making roads safer or toilets more accessible in developing countries, for instance) but until the last few weeks I never interrogated the larger goals of development. And I imagine that I could go on wondering about this question–what development is– for the rest of my life.