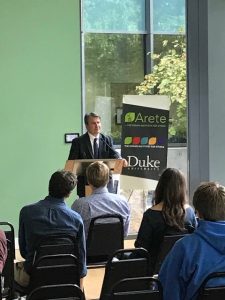 Can the root cause of America’s political polarization be traced to a less diverse civil society? The answer is yes, according to Professor Patrick Deneen of the University of Notre Dame, who was invited to speak to the Duke community by the Arete Initiative at the Kenan Institute for Ethics. Professor Deneen presented current work to an enthralled group of faculty, staff and students. Professor Thomas Pfau, Alice Mary Baldwin Professor of English and Professor of German, served as discussant.

Students of political science and history will remember Alexis de Tocqueville’s classic conclusion that American democracy succeeds due to the zeal with which its citizens engage in voluntary activities. As Professor Deneen reminded his audience, Americans’ willingness to work with each other in local associations distinguished them from their European counterparts whose social interactions were governed by age-old societies of wealth, rank, and privilege.

This voluntary “joining” spirit that Americans exhibit is essential to providing a check on the authority of government. Diverse ways of organizing religious and civic life in America, with minimal interference from the government or societal elites, made it easier for citizens to accept the harsher realities of government, namely enforcement of the nation’s laws.

However, as Professor Deneen pointed out, de Tocqueville himself predicted that democracy could be corrosive of the very political authority needed to govern society if leaders supported some individual choices while castigating others. In such cases, disillusioned citizens could withdraw from public life to pursue narrow interests, making it harder for government to accurately gauge the common good. Under such conditions, neither the state or its people would have an accurate picture of the other and political polarization would result.

Professor Deneen identified the 1960s as a period in which such polarization accelerated on American college campuses. By seeking to ban texts and theories that were suspected of supporting militarism and social injustice from the curriculum, university leadership inadvertently fostered student civic groups that held political views that were hostile to and intolerant of one another. By the 1980s, liberals and conservatives who came of age during the 1960s entered into government, deepening partisan divisions.

Professor Deneen concluded his talk with a stark warning: Genuine democracy makes especially high demands on the leadership class. It is essential for today’s leaders to allow common citizens the opportunity to explore diverse interests and viewpoints at school, at work and in their private lives in order to create the political legitimacy the state and its leaders must have to function effectively.