Are We Home Yet?  Newcomer Youth Reflect on Life in Durham Through Photography

In completing my Graduation with Distinction Project at Kenan, it was a great way to come full circle in my journey at Duke as I began my time here as a student under the mentorship of the very same woman I ended it with [Dr. Shanahan]. I was looking for a home here on campus and I ended up finding it in a way through Kenan. This project allowed me to reflect on my own concept of home and see how it really can be a universal understanding and I am so incredibly thankful for that opportunity. – Sloan Talbot (T’19)

Friday evening not only marked the beginning of Duke’s Reunion weekend but also the culmination of Sloan Talbot’s Senior Graduation with Distinction Project. The Kenan Institute for Ethics hosted this exhibit in its Keohane-Kenan Gallery of the West Duke Building, opening with a reception, a welcome by KIE Director Suzanne Shanahan, and remarks from Talbot.

Through her project, Talbot asks “How does a new place become a home?”  For Talbot, “Home is complicated and nuanced.  It is a feeling and a physical space. Home is the place you miss when you are away. “

In collaboration with the Kenan Refugee Project, Talbot defines her project as follows:

When asked in an early interview, “Where are you from?” a student declared, “I’m not from anywhere. I tell people I’m from Mars!”. Thus sparking the idea for the planetary theme that runs through this exhibit.  By having an alias of a planet or moon for each student and weaving in elements from that location to the work itself, the exhibit aims to both protect the privacy of the students but also play with just how complicated home can be.

Over the course of a year, ten refugee youth considered what makes Durham, North Carolina their home. The students participating in this project come from Afghanistan, Rwanda, Tanzania, The Central African Republic, The Democratic Republic of the Congo, Iraq, and Uganda. These youth are all part of the Kenan Refugee Project’s Citizenship Lab – a collaboration to promote academic success, career aspirations and goals, and civic engagement amongst newcomers. The exhibit shares a set of photomontages that are a mixture of the students’ original photography, as well as graphical elements from their interviews that stood out as artifacts, activities, or places that make them happy, joyful, and feel at home.

In a gathering filled with Kenan faculty and staff, fellow students, visiting alums, and many of the youth featured in the exhibit, Talbot thanked all of those who helped and supported her throughout this project – notably Tommy Klug whom she credited with the graphic design.   Of her exhibit, Talbot says “None of these pieces can definitively answer ‘What is home?’ but they are an attempt to start a conversation with and between the students and the public who view their work to unpack the complicated feeling of home.”

Are We Home Yet? will be on public display in the Keohane-Kenan Gallery of the West Duke Building through graduation. 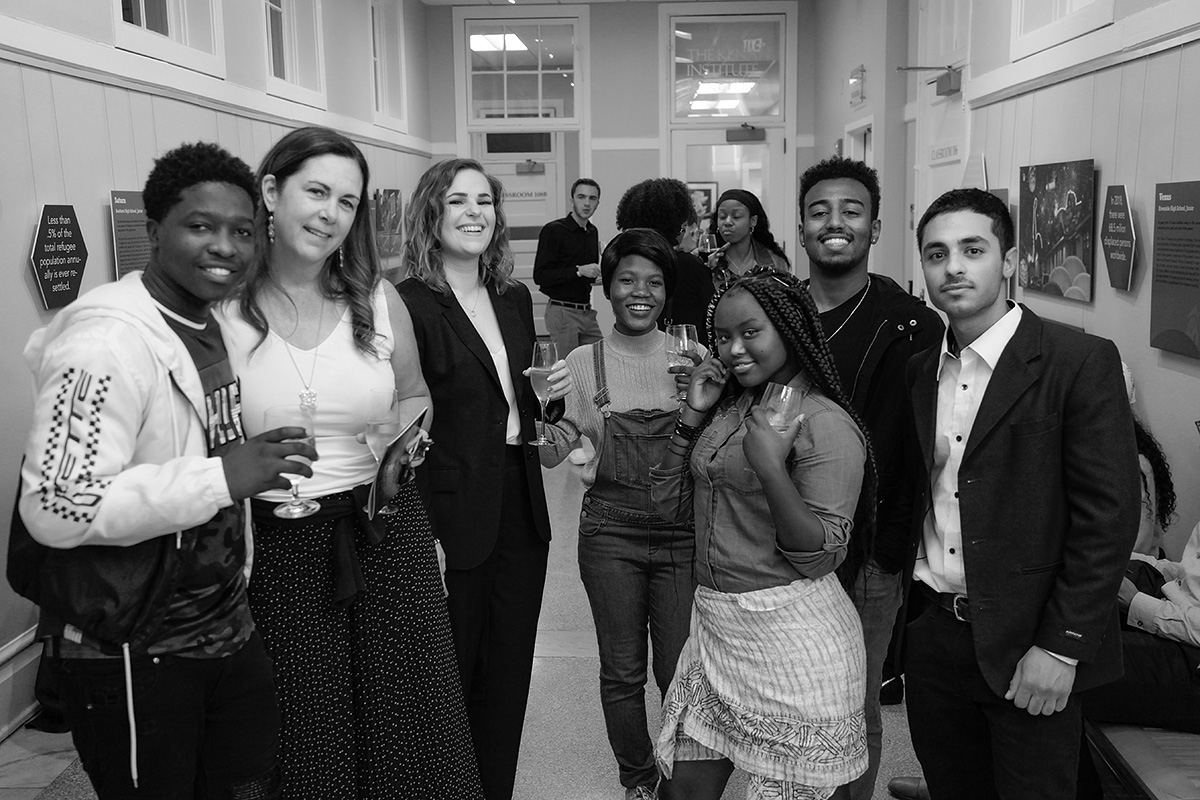 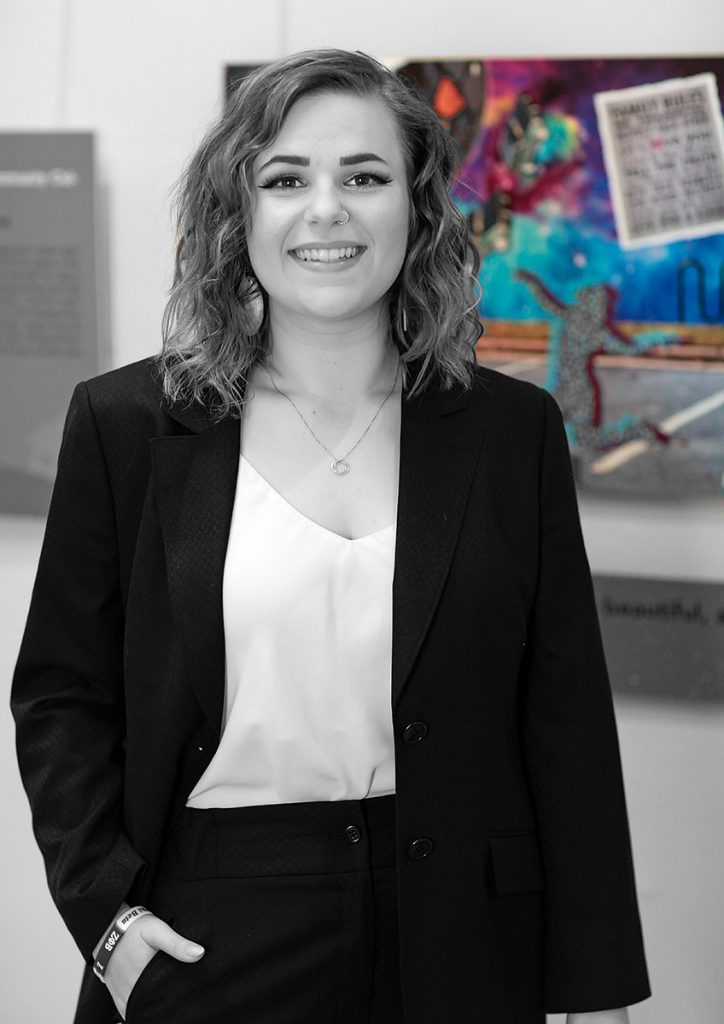 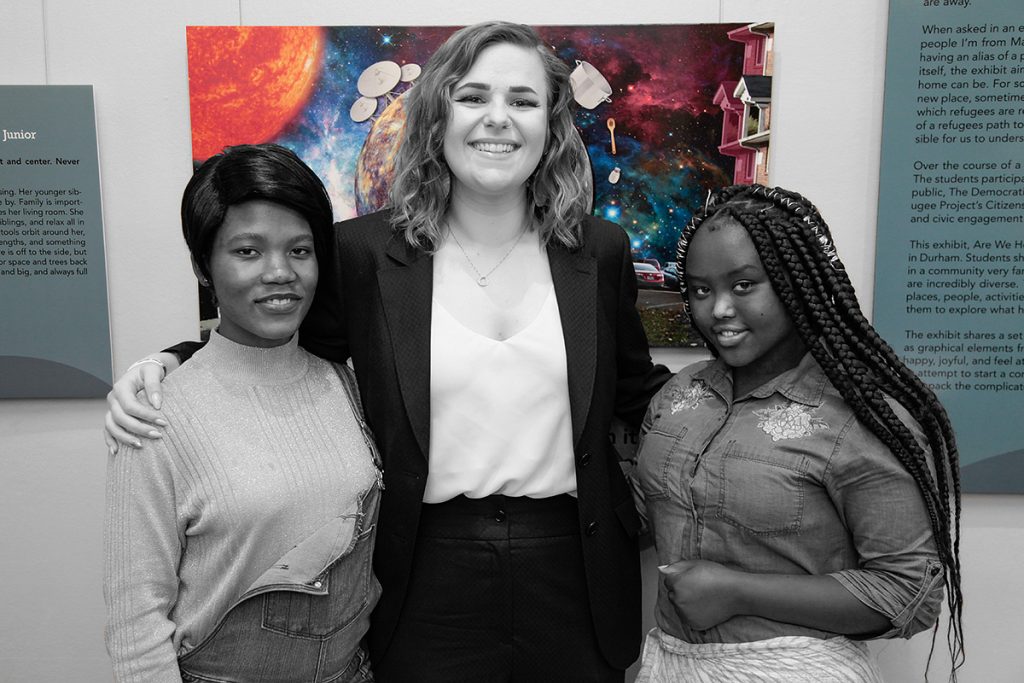 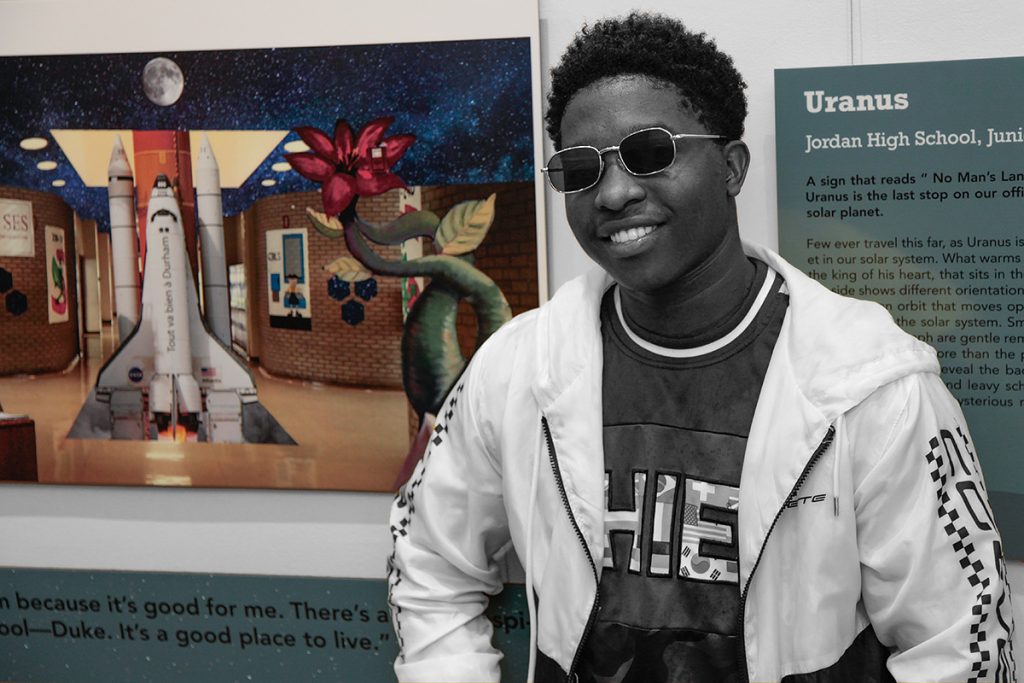 The Kenan Refugee Project (KRP) is a community-based research and advocacy project at Duke University’s Kenan Institute for Ethics. Since 2010, KRP has collaborated with refugee communities across the globe to collect and share their stories. With the goal of understanding the drivers and dynamics of contemporary displacement and forced migration, as well as a commitment to refugee well-being, a team of faculty and students have conducted life story interviews of refugees in Egypt, Nepal, and Jordan, as well as in our local community of Durham, North Carolina. As the “refugee crisis” permeates political discourse and media headlines, we look beyond the facts and figures in an effort to understand the human implications of mass displacement.