Everyone needs a metric to measure if they are overworking. Two weeks ago, I realized mine was when I don’t have time to enliven a lifesize cardboard cutout of Alice in Wonderland’s Mad Hatter.

It was 12am and my two friends just entered my room on a Thursday night with beautiful weather that seduced overwhelmed and procrastinating students to come outside. We had a lot of energy, and none of us had any pressing deadlines coming up. Scratch that. We had a lot of energy, because none of us had any pressing deadlines. In fact, it was a small miracle that my friends and I could all find time to be together in the first place. This hangout night was in the pipeline for quite some time and finally it came to fruition, so we were going to make the best of it.

Inviting my friends into my dorm room, they immediately saw the large cardboard cutouts of Alice and Wonderland characters that I had scavenged from last week’s East Campus Council’s Alice and Wonderland themed party. I recounted how, earlier that week, my residents had appreciated going door to door pranking their Jarvis hallmates by knocking on a door and leaving only a super creepy life-size cutout of the Queen of Hearts, the Mad Hatter or a giant mushroom to answer. Well enjoyed may not be the best word to use for everyone (particularly for the person who punched the Queen of Hearts), but for us (the ones doing the pranking) it certainly was.

Since that night, these cutouts resorted to their original lifelessness. They were Flat Stanleys waiting for the next energizing event to resurrect them. I described this to my two friends who consequentially, as if there were a string that attached the intangible ideas that lingered in the depths of our minds, simultaneously exclaimed “so, let’s bring them to life again.”

Our hangout night turned into a down-the-rabbit-hole adventure around East Campus. My two friends and I formed a sui generis mobile acting troupe in which I enacted the Mad Hatter cardboard cutout who was a loyal servant to the Queen of Hearts (played by another friend) who had recently lost her mushroom plant (played by the third friend). We crafted a skit together, quickly memorized our lines and prepared for the most spectacular piece of theatrical improvisation the world has ever seen.

Our first stop: Blackwell Common Room. We entered and found a few first years stressed and taking a break from what appeared to be mounds of work. Announcing our entrance with absolute seriousness, we performed our five-minute skit, all while seeing the audience’s smiles that warmly greeted our ridiculousness. The culture of overwork that permeated Blackwell dorm was lifted for those five minutes. Our performance played a role similar to that of a Harry Potter patronus fighting off the Dementor of overwork.

Through witnessing the smiles of our audience members, I recognized the true measurement to overwork: overworking is when I don’t have time to do ridiculous things with friends; when I don’t have time to make others happy. And, I also realized that although overworking has its time and place (it is inherently super productive), too much overwork overpowers wellbeing, and, once wellbeing is overpowered, authenticity becomes a concept only present in Wonderland. Perhaps one’s goal ought to be to find a little of their Wonderland each day, I figured.

After no less than two hours of performances, the Wonderland Acting Troupe retired, and the cardboard cutouts lied lifeless again on my dorm floor awaiting revival once again. My friends left, taking nothing with them except unforgettable memories. I was ready to go to bed satisfied, but I heard a knock on my door. Confused, I opened the door to find three residents eagerly asking to borrow the characters that lied flatly on my floor. Feeling immensely prideful for inspiring such hooliganry I eagerly handed them off on the condition that they update me on their successes…

Two weeks later, on my birthday, I received such updates.

I had invited friends to celebrate, and among these friends were the members of the Troupe and the recipients of the wonderful Wonderland cutouts. My Troupe friends and I were talking when a group of my residents carrying the cutouts facedown entered the celebration. They quickly amassed all of the attention in the room and announced themselves… I expected them to have prepared a skit of their own, but what they had actually done was far better.

Turning the cutouts around, everyone burst out laughing. My residents had taken pictures of my face (from when I had braces!) and fixated them on the cardboard cutout faces. They had one-upped my ridiculousness and fully embraced the value of a good laugh among a Duke Blue sea of seriousness.

From that point, these cutouts were eternally anthropomorphized into a living reminder of the value of a smile. We all need to make time to smile. And, to this day, these symbols look out of my Jarvis window reminding unsuspecting people passing by to not take life too seriously…

With the help of my friends and some cardboard, I have created my own little joyful Wonderland. It is a place that exists outside of the five senses. It can only be experienced with the sixth sense: a sense of humor. And what makes the sixth sense so beautiful is that it is enhanced by bringing others along. I have created a (not-exactly-Gothic) Wonderland and have shared it with friends, and through that sharing, I have enhanced my Wonderland. 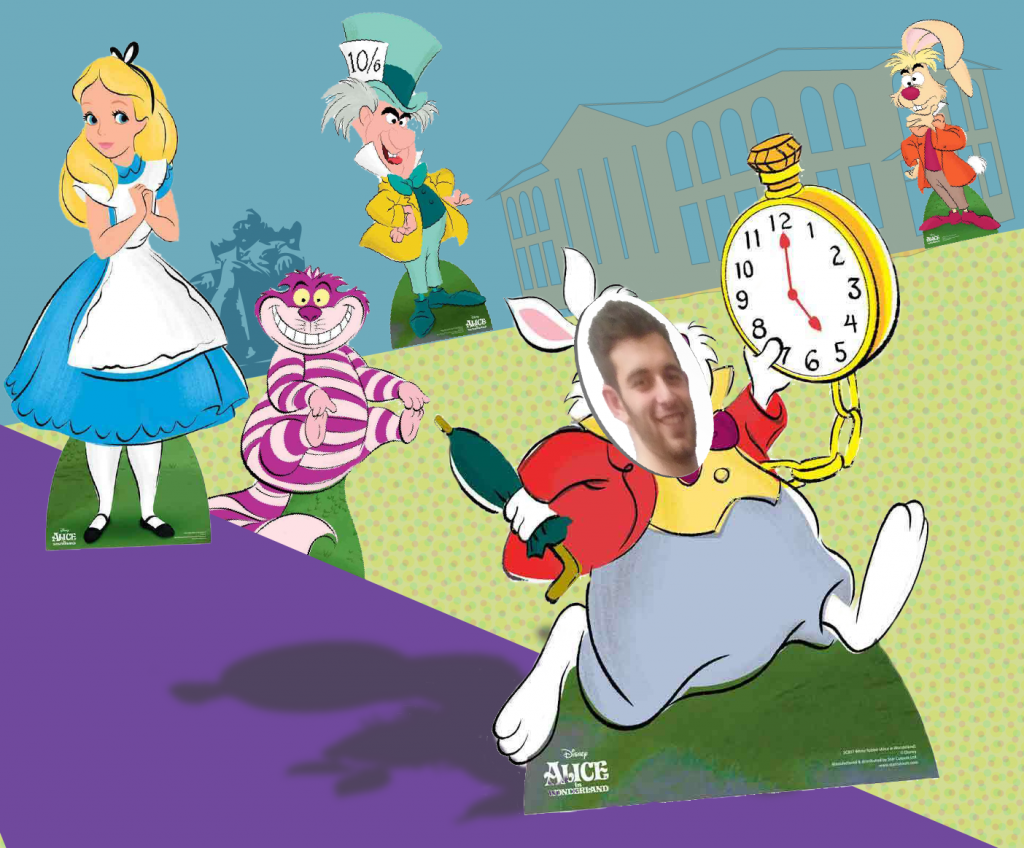