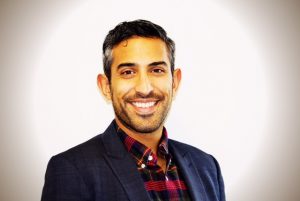 Amol Mehra is the Executive Director of ICAR, a coalition of human rights groups focused on corporate accountability. The organization researches, advocates and campaigns for legal frameworks to promote accountability as well as push governments to create and enforce rules over corporations that promote human rights and reduce inequality. Prior to ICAR, Amol co-founded and directed Rights Respect. This narrative is based off an interview conducted by Celia Garrett, Kenan’s Pathways of Change Intern placed at ICAR, at the organization’s office in Washington, D.C.

Celia Garrett: Where did you grow up? What were your early years like?

Amol Mehra: I grew up in Calgary, Alberta in Canada in a town that is a sort of one economy town – an oil town where everyone then and to this day is connected somehow to oil money. There, I gained both a social and environmental awareness of the industry and its destructive impacts as well as the way that jobs can create and sustain a town. There was a tension between the exploitation of natural resources and the benefits of the corporate jobs and the livelihoods built around them.

CG: What is your educational background?

AM: I went to McGill College where I studied the social context of business – I received my Bachelors of Commerce, and spent my undergrad studies looking at business issues (a sort of pre-MBA program). I was interested in social dimensions and one of the programs launching at the time was the social context of business. From there, I went directly to law school where I focused on human rights issues and international law, and really focused on the intersection of corporations, international law and development.

CG: What did your path to business and human rights, and your path within it, look like?

AM: I graduated in the midst of an economic collapse, where it was difficult to get jobs, especially in the human rights field where it’s challenging to get jobs straight from law degree.

I spent a lot of time honing expertise: I launched my own non-profit called the Right Respect – a business, human rights, and CSR consultancy that focused on writing and advocacy around human rights and business issues. I was also working for Human Rights Advocates as their business and human rights guy – my official job title being legal advisor. On the side, I was working for a lawyer doing property law and getting paid hourly, to make money. I was working on the side to funnel my human rights backgrounds and interests, as the market was tight and there weren’t many jobs. ICAR was created by the funder and I was hired by Earth Rights International who received the grant from the funder to start the organization. It was just me with a one year grant and now, 7 years later, we’ve grown a lot in terms of work and impact.

CG: How did you get involved with ICOCA and the other advisory boards you sit on?

AM: I was doing some work for the UNWG on Mercenaries when I met some folks involved in the ICoC development. It was there that I first understood what they were building and became interested. Once at ICAR, I joined officially in the process of developing the Code and subsequently was elected to serve as a CSO Board representative.

I am on a lot of different advisory boards and participate in many organizations because, to address the totality of the problem, we need many different approaches. So I try to get engaged with as many as I can and with people who do this work – a big reach approach.

AM: My work entails the overall strategic direction, growth and sustenance of the organization. As the ED, my role is to make sure we are aligned with the priorities we are seeking to achieve, working to effectuate them and that people have resources to do their jobs. My work focuses on three mains objectives – major advice and direction, oversight and engagement, and fundraising. And external advocacy and fundraising, being the face of the organization – although I try to make everyone feel like the face of ICAR, given the team mentality.

CG: How much of your time do you spend fundraising?

CG: What are the most rewarding and challenging parts of your current work?

AM: The most rewarding: feeling like every day I get up and go to a job where I know that if we succeed, we will have shifted the world in a more positive way and I wouldn’t trade that for anything. The least rewarding or most frustrating: change takes time and takes resources and takes creativity and some days those factors weigh heavy.

CG: In what ways has your work at ICAR changed your views about business and human rights?

AM: I have become more frustrated and become more of a realist about the possibilities of government acting. Before, I sort of assumed that governments were just waiting for an explanation of how but what I’ve come to realize is that governments many know how – they just don’t. And what we have to do is to get them to ‘do’ which is part of why we’re building out our campaigns and advocacy work. ‘How’ work and ‘why’ work – how you should do it and why you should do it are two different things and we haven’t done the why as much the how.

CG: What skills have helped you the most to succeed in the business and human rights field?

AM: I’m very collaborative. I believe in collaboration, and I think I am a strong communicator both in public speaking and to partners. I am honest about what I want and what I think we should be doing and respect expertise. There’s a humbleness I try to bring to my work. If we are not issue experts, then we’re not going to try to pretend that we are – we will go find partners who are.

CG: Who or what organizations do you look to as leaders in the business and human rights community?

AM: My touch points, who I looked up to from the beginning and to this day I contact regularly – are Arvind from Human Rights Watch, one of the smartest people in the space and someone who has been working at this for almost 20 years in one of the most powerful organizations for human rights in the world – a great thinker and one of my closest advisors. There’s also Ellen Dorsey, a funder and incredibly strategic thinker. A very wise leader who has helped build this area and tells it like it is whether she’s speaking to a CEO or to a grantee. Katie Redford as well, the mother of ICAR who incubated us. Katie is very collaborative and a nurturer who grows people and organizations. She’s remarkable.

CG: What do you see as the biggest opportunities in the field, what contributions are most needed?

AM: I think one of the opportunities is to move business from a target to an ally and if we could think about the ways we can lead corporations to do good and promote human rights alongside human rights actors. We’re seeing some of this in the pushback to Donald Trump but there’s way more that need to be done to get business leaders and employees to push for protections and fight against this.

CG: What kind of future do you see business and human rights moving toward, realistically and pie in the sky?

AM: Realistically is that we are moving towards mandatory. As exhibited in the new democratic platform, there is an increasing frustration with an excess of corporate power and influence over our everyday lives. We need governments to step back in and set regulations. We’re not trying to harm or curtail business – we don’t want to stop business as much as we want to set rules and conditions around what gets done, lead to jobs and economic development – it should be done in a way that promotes the rights of workers and communities. A pie in the sky future: to build a world where workers are treated fairly and where corporations benefit them and their communities. A world where globalization can work for all, and can reset the rules – not stop it. Globalization should be more equitable.