Amit Sen has worked with the UN High Commissioner for Refugees (UNHCR) since 2007 on promoting the human rights of refugees and stateless people. He currently works in Jordan as UNHCR’s Regional Protection Officer on Statelessness for the Middle East and North Africa (MENA), where his focus is promoting the rights and security of children displaced by the conflicts in Syria, Iraq, Yemen, and Libya. In April 2016, Mr. Sen will visit Duke as part of the Kenan Institute for Ethic’s Practitioner in Residence program. In this interview, Mr. Sen answers questions about his personal background, the evolution of his interests and his career in addressing refugee and statelessness challenges. DHRC at KIE Project Director Suzanne Katzenstein conducted this interview electronically. 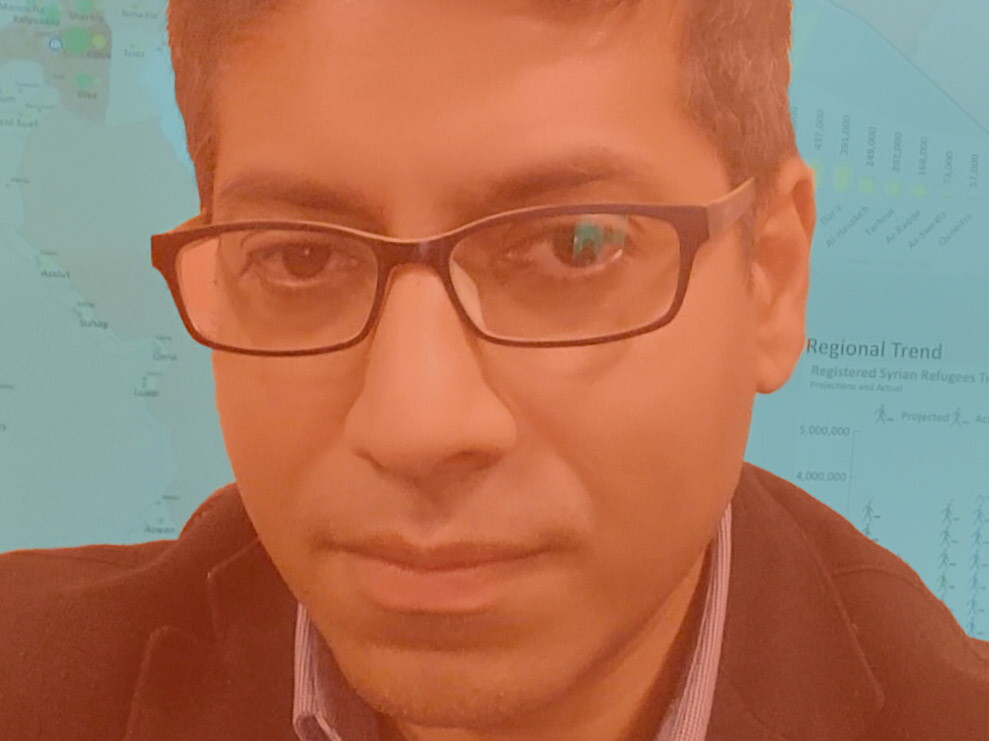 Amit Sen: My childhood was spent in Calcutta, India, the suburbs of London, and in Nassau, Bahamas, before we settled permanently in the US. Living in these environments as Indian immigrants at the time was complicated and sometimes difficult.  The experience left me to contend at a very early age with hard questions about identity, discrimination, and belonging – issues that I didn’t have the requisite vocabulary to examine at the time, but which stayed with me as questions that demanded explanation or at least more examination.

SK: How did you become interested in international human rights generally and refugee and statelessness specifically? Did you work on other issues before focusing on refugee rights? What explains the evolution of your interests?

AS: For me, the interest in human rights issues has always been deeply personal. Being based in both Dhaka and Calcutta, my parents lived on a major geopolitical fault line in South Asia. When India was partitioned in 1947, and again when Bangladesh’s war of independence came in 1971, my parents’ families were among the millions uprooted and forcibly displaced.

Historic events aside, even something as seemingly simple as their decision to marry was fraught with risk and complexity.  My parents were among the first in their community who dared to have an inter-caste marriage, and in so doing were in open defiance of the arranged marriages prescribed for them as well as the larger practice of “untouchability,” which sadly remains entrenched in many ways. Their move to the UK was partly economic, but also motivated by a real need to escape an environment of ostracism, and possibly more serious reprisals for violating the strictures of caste segregation. I think there’s a direct line from growing up with these stories and experiences to wanting to work on these issues.

With the issue of arranged and forced marriage being very close to home, my main interest was initially in women’s rights, which led to working at the U.S. Department of Justice on the implementation of the Violence Against Women Act (VAWA). From there, I started working on the issue of human trafficking, which can sometimes give rise to an asylum claim, and also began representing clients in asylum litigation who had fled gender-based persecution in their countries of origin.  Working on asylum cases brought me to UNHCR, which in turn provided the entry point to working on statelessness.

It’s actually brought me back to the issue of women’s rights in many ways — a leading cause of statelessness worldwide is the prevalence of laws that deny women equal nationality rights as men. Today, 27 countries deny women the basic right to confer citizenship to their own children on an equal basis as men, and 12 such nationality laws are in the MENA region.

AS: My current work focuses on promoting implementation of a core principle in international law – everyone has the right to acquire a nationality, and no person should be left stateless. It’s a fascinating issue to work on, as access to nationality is related to so many other rights (health, education, freedom of movement, even the right to legally reside in one’s country of birth), so it affects people in very immediate ways.

One of the things I love about my current work is that no two days are alike. This particular week was devoted to consulting closely with the UNHCR Offices in Sudan and South Sudan to advise on whether state succession (the emergence of South Sudan as a new country in 2011) and the subsequent rise of armed conflict in South Sudan may also be producing new cases of statelessness. In addition to working in close consultation with the 20 UNHCR operations in my region to examine access to citizenship, an issue which differs considerably by context, I also have the privilege of serving as an advocate on the issue of statelessness in a variety of other fora, which have recently included the UK Parliament, EU Parliament, and US Congress. Increasingly, what we see in MENA is that risks of statelessness become amplified in the context of armed conflict, family separation, and forced displacement—as documentation systems are destroyed or compromised, and as forcibly displaced children are left unregistered and separated from the parents who are their sources of nationality.

SK: What are the most rewarding and challenging parts of your current work?

AS: The most important element by far is the opportunity to talk directly with people in crisis, hear how they are coping with effects of war and displacement, and seek their recommendations on what we as the UN need to do. I recently talked with Syrian refugees in Jordan about the risks affecting newborn children who go undocumented and unregistered at birth, some of whom are featured here: http://www.unhcr.org/ibelong/birth-certificates-to-prevent-statelessness/. I’ve also had the chance to meet with Syrian refugee families contending with similar challenges in Lebanon and the Kurdistan region of Iraq, along with various stateless populations throughout the MENA region. There’s no replacement for talking with and listening to the people on whose behalf you are actually working, and it’s something that needs to inform every level of humanitarian work.

SK: In what ways has working for the UNHCR in Jordan changed or reaffirmed your views about refugee rights and statelessness protections in the MENA context and beyond?

AS: It’s been a transformative experience. In my first job with UNHCR, I’m somewhat embarrassed to confess my assumption that we could simply solve the problems of refugees through efforts like legal proceedings to secure their release from detention, prevent deportation, or seek redress for rights violations. Interventions like those can still be useful, of course, but in relation to the Syria situation, it’s worth remembering that there are 4.7 million refugees in MENA alone, and they serve as their community’s most critical resource. They come from all levels of society and bring incredible courage, skill, knowledge, creativity, and tenacity to the project of surviving and keeping their own communities safe. We have a role and responsibility, to be sure, to contribute to protection, assistance, and solutions. But refugees and stateless people know their own needs better than anyone. No one is more of an “expert” on their situation than they are, and there is an urgent need for a paradigm shift where refugees are engaged as full partners in designing and delivering protection and solutions, rather than being seen as passive recipients of “aid.”

SK: What advice do you have for students who want to work on refugee and statelessness issues?

AS: It’s the same advice I would give myself as a university or graduate student. First, try to get out and work internationally, as soon as you can. If you’re interested in refugee issues, for instance, there’s no substitute to working in a region generating forced displacement, or to talking with people who are in need of international protection and assistance. The second thing is the main advice I try to remind myself of today – remain skeptical of established paradigms on how humanitarian work is supposed to be done (including your own), and keep listening to those in need and re-evaluating how you can best contribute on that basis.  It’s really exciting to see a program like DukeImmerse: Uprooted/Rerouted offer opportunities for precisely this kind of substantive engagement and critical self-reflection.