“Always in the Field”

As a freshman I participated in Kenan’s LEAPED DukeImmerse program. Whenever I describe the program, I talk about the field research component – how we visited Bhutanese refugee camps in Damak, Nepal and collected life story interviews. While the travel part of the program is the easiest to describe to others, the preparation for the travel and ethnographic research aspect is something I rarely talk about, but that I constantly reflect on.

Leading up to the travel in Nepal, I learned about the importance of capturing personal moments and landscapes while being mindful of consent. As a rule of thumb, we were taught not to use the zoom lens on the Kenan cameras that we carried around while in the camps – zooming meant that we should move closer, so subjects were aware of the picture being captured. If we could not get the shot without a zoom, then we were being intrusive unbeknownst to the subjects. Another lesson that we were taught as researchers: we are “always in the field.” We should not leave refugee camps and forget to observe and take field notes, nor should we use zoom lenses on our personal cameras. As a reminder, we had matching string “always in the field” bracelets.

These lessons have stuck with me over the past five years. Now, be it a research project or a holiday I am taking with my family or friends, I am conscious of my presence and how I take photos. I also always carry a field notebook to make observations and quick sketches.

I recently took a trip to Greece and Turkey with my parents and a friend. Despite being excited to go hiking and see Byzantine and ancient Greek architecture, I was apprehensive. Apprehensive to see what the situation on the ground was like for incoming refugees, having read many news articles. Apprehensive to be traveling and seeing similar sites that many migrants might pass through on a completely different journey. Wondering if I could be both a tourist with the intention of focusing on ancient historical sites and ancient conflicts, yet learn too about Greece’s current situation and its struggles as it is overwhelmed by more than 57,000 refugees and migrants bottlenecked in the country, largely due to Macedonia’s border closure in March. 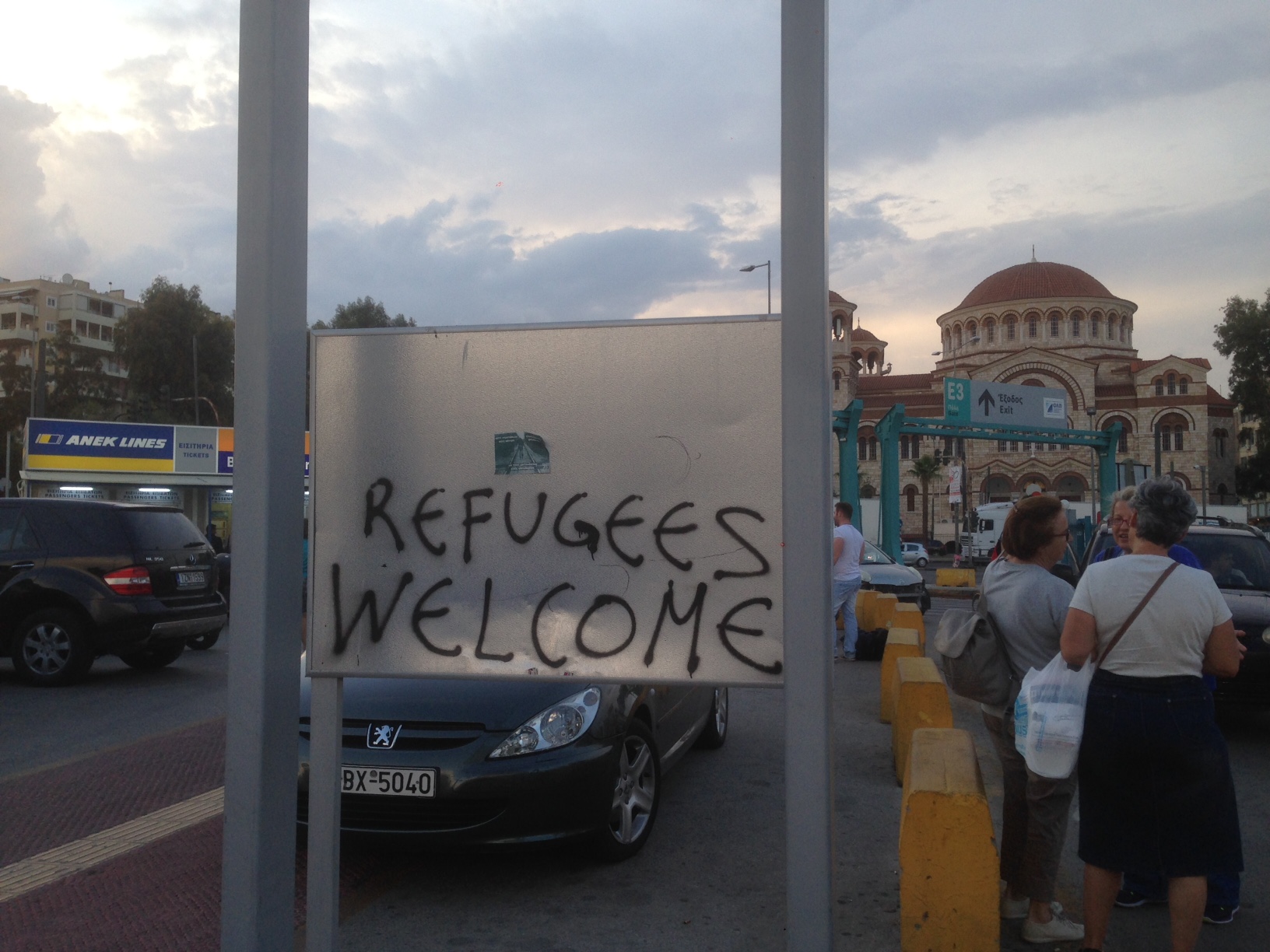 We did not notice refugees in Greece until we took a wrong exit heading to the ferryboat pier.   We drove past a group of tents with apparent refugees in the woods beside a decrepit gas station. From that moment on, though, I became much more aware of their presence, albeit slightly hidden. They were near the our hotel, in abandoned buildings on a side street that the concierge said to avoid; they were near the port, just off the highways; they were in the commercial square of Athens as we bought pastry for breakfast. Until taking a wrong exit as we headed to a ferryboat, more apparent than an influx of refugees was that city looked economically depressed: graffiti everywhere, stray cats and dogs, and parks and facilities from the 2004 Athens Olympics that bore the traces of a once well-kept facilities that had been left to slowly degenerate. It was apparent that Athens was in need of the money that tourism brings. Vendors echoed this sentiment and said it was difficult to keep their businesses a float. In addition, the local population was not consuming as much with the minimum wage at about €4 an hour.

Turkey looked better than Greece, at first blush.   We arrived in Istanbul at night and ventured out to Taksim Square to grab a bite to eat. Despite it being 10pm, there was lots of activity and many restaurants were open for dinner. As we walked through the square we passed folks gathered around flower vendors, toy vendors, musicians, and just enjoying the weather. Yet, unlike Greece, where refugees were “out of sight and out of mind,” mothers were sitting with children with containers in front of them ready for offerings. They did not come up to people passing by to ask for money. It seemed they were embarrassed to ask. I did not take a picture or make a quick sketch because both gestures felt intrusive and wrong.   However, the image of mothers holding their children will forever be imprinted in my mind. Shopkeepers told us how hard life was becoming now that tourism was down 27% from the prior year. And our visit was a week before the June 7 bombing of the area around city’s historic Beyazit Square neighborhood (a major tourist attraction) that will undoubtedly further frighten potential visitors from travel to Istanbul.

While I did not resolve my unease of traveling as a tourist who is focusing on historic sites, yet who is aware of the current refugee situation and the plight migrants to Greece and Turkey face, I did find myself thinking a lot about difference between my situation and others. For example, we visited Crete via ferryboat. Nearly at the same time, one June 3, about 340 migrants were rescued and nine bodies were pulled from the sea after a boat capsized in the Mediterranean Sea, 75 nautical miles (140km) south of Crete. I could not stop imagining the conditions these individuals faced on that boat, or the small dinghies that refugees are packed into to flee to Greece. In contrast, our party of four had a small room with two bunks and a private toilet with a shower.

I did try to maintain an “in the field” mindset, I did not see the trip to Greece and Turkey as a vacation that was a complete escape and disengagement from the world and the problems associated with daily life. Rather, it was an opportunity to see firsthand how two nations are meeting the challenge of assimilating some of the world’s 65.3 million refugees in 2015, as reported today by the United Nations High Commissioner for Refugees (UNHCR) (a 5.8 million increase from 2014). Kenan’s teaching of an “always in the field” ethos has changed the way that I approach foreign travel, I think, for the better.