Alice Cohan, Political Director for the Feminist Majority, has been a feminist activist since age 19. She has been with the Feminist Majority since 1995. In this role she does a wide variety of work including interviewing women congressional candidates, recommending endorsements, fundraising, and chairing an informal network of PACs that focus on women candidates. 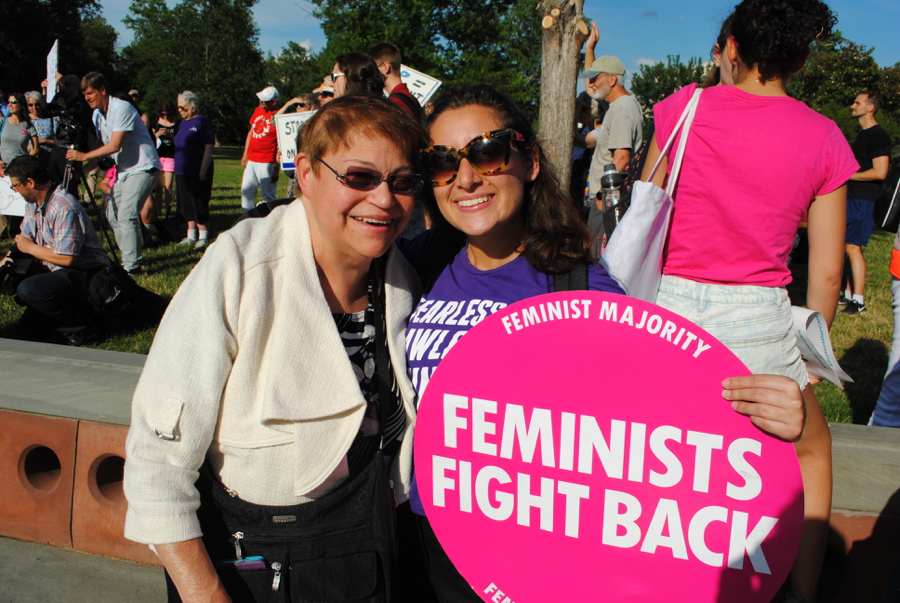 Alice Cohan, at left, is Political Director at the Feminist Majority

Most recently Feminist Majority launched an independent expenditure campaign, “Feminists for Obama”, with a national website and a special project in Virginia. Currently she is active in the VA Coalition to Protect Women’s Health regarding the Women’s Health Clinic restrictions. Cohan is the former Political Director and Field Director of the National Organization for Women. She was the Director of the 2004 March for Women’s Lives that brought over 1 million supporters to Washington, D.C., through the work of over 1,400 co-sponsoring organizations. As March Director, Alice braved countless storms, juggled egos and priorities, and pulled off the March of a lifetime. She has worked on many political campaigns for feminist candidates, ballot initiatives, and worked with a wide range of coalitions.

Amanda Gavcovich:  Let’s start with some background – where were you born, what was your family like, and where did you go to school?

Alice Cohan:  I was born Trenton, NJ in 1950 to two parents and an older brother. I started university at American and finished at Ryder in New Jersey. After American, and before Ryder, I worked at Princeton library but they didn’t allow part-time students and paid for you to go to school somewhere else, so I went to Ryder.

AG:  What brought you into politics, anything in your family background?

AC:  My uncle was very political and ran local democratic clubs. My first DNC was when I was 12.

AG:  Where and how did you learn how to organize?

AC:  It actually started in the 3rd grade: Our teacher got sick and we had a permanent substitute, who was just awful. So I decided to organize my classmates on the school ground. For the next time she did something outrageous, we would march ourselves to the principal and demand a replacement.

Of course, she did something that was outrageous and unprofessional so we all stood up to get out of the class, but the teacher blocked the door so only Jimmy Griffith and I made it out. I had made a sign, and we walked to the principal’s office. However, the principal said, “there are things in life that you can’t change and you have to get used to it.” That really made me mad. I thought that wasn’t right.

In high school I developed a project through the 4H. It was the first inner city 4H program in the country. (4H is a university extension program – put in place for farmers, taught in summertime.) We essentially created a free school program for inner-city kids using this program designed for farmers kids. We taught the kids how to cook simple inexpensive things because a lot of the kids were latch key kids (parent not home to let them in because they are working).

And college was the time of the Vietnam War. I got heavily involved in the peace movement. I was trained in Gandhi-style civil disobedience tactics and organizing for nonviolent action.  I became part of the anti-war organizing movement. Gandhi was my hero.

AG:  What did organizing look like back then? Any standout memories from this time?

AC:  When I was still in college, on May 1971, there was supposed to be an anti-war demonstration that would basically close the city down.

My role was to work on the liaison team with military and police as the only woman. I was responsible for gathering the names of the people who were going to do civil disobedience and were most likely to get arrested to give to lawyers. Doing this, I created a working rapport with police. We had a mutual respect for each other.

That same week, maybe a day before the anti-war demonstration was to happen, police pulled permits for a huge women’s march. Still, very radical women came out to protest on the ellipse behind the White House. Police on motor scooters were chasing the more radical women on the street. The team I was working with for the protest that was to go on the next day realized that this would be really bad for us if these women stayed around and gave the police trouble.

I made my way to the front of this crowd of women, and my friend handed me a bullhorn to negotiate and organize with the women. I asked them to sit down and have their rally, instead of standing up and running around. I offered to help them if they wanted to move into civil disobedience and would give them directions if police moved to make arrests.

Before I could finish negotiating with the women and some of the police, the civil disturbance police dragged me behind police lines, calling me out as an organizer, saying “get her.” They threw me on the floor at the back of a bus. And I heard the police officers saying about me and the protestors, “remember they’re not human beings, they’re going to hurt you.” So I stood up in the back of the bus and declared, “we are human beings, we can be your mother, daughters, sisters.” The officer responded to me by pulling me down, and he said, “roll up sleeves. I want to see the needle marks.”

I responded saying, “I feel sorry that the only explanation could be that I’m on drugs.” He began to kick me and then smashed my bullhorn. All I could do was crouch and cover my head. I said to him, “There’s nothing that you can do to make me hate you.” And that stopped him.

AC:  I was then put in jail for hours with these very radical revolutionary women who were talking about violent revolution. It made me very uncomfortable, coming from the peace movement. Soon after I was put in the jail, a whole other group of women come in, some I knew.

There is this rule that you can’t have more than 300 people in Lafayette park (in front of the White House) without a waiver, but Quaker women had been doing services there for years with that many people because Nixon had said he was a Quaker, so nobody in the past had enforced this waiver rule. However, because the police knew there was supposed to be a lot of action in this weekend, they were cracking down on everything going on. So in come these Quaker women into the jail, in the holding cell across from mine. I convinced the jail personnel to transfer me to the other women’s cell. In this time, we joined together to make sure we would get involved in the women’s movement, and make sure it was nonviolent and peaceful.

AG:  Were there any other parts of your background or life that brought you more fully into the fold of the feminist movement?

AC:  Sexual Assault. I took a cab to a meeting and the cab took me in the wrong direction. I was dropped off and didn’t really know where I was. A man asked me if I needed help and if he could walk me through the park because it was dark and not the safest area of DC (at this time I was still at American). I allowed him to walk me and then two of his friends met us within the park we were walking through, threatened me with a knife, and they raped me. I never reported it to the police.

I told one of my friends at the time about the rape and this friend had organized a women’s center. This friend went on to write the mission statement for the National Women’s Political Caucus (NWPC), often credited to Gloria Steinem. A week after I told her, she took me to the meeting that would create the NWPC.

Every major feminist at the time was there, including Bella Abzug and Gloria Steinem and even Ellie (founder of the Feminist Majority), to have this meeting to form the National Women’s Political Caucus. The meeting split up to form different committees.

We split up into the Young Women’s and Older Women’s Caucuses as well as the Prime of Life Caucus. I ran for the steering committee for the young women’s caucus. Some prime of life caucus women had come in, offering to help me and make some deals so I could get onto a steering committee, and I agreed.

Then this woman in a navy blue polyester pantsuit, which was not in fashion at the time, (I was wearing colored ribbons in my hair and a tie-dyed caftan) comes in and tells the young women’s caucus that we were going to get screwed by these prime of life women we just made a deal with, and that we wouldn’t get the votes to be on the steering committee.

This woman was correct, and this woman in the navy blue suit happened to be Ellie Smeal, founder of Feminist Majority, and NOW president. I never got onto the steering committee.

From this meeting, I then joined the National Board of NOW and was hired as the field organizer. I spent a lot of time traveling, months at a time, training people and creating action teams to ratify the ERA.

AG:  Do you have any memorable or significant wins and losses from your work in the feminist movement?

AC:  Definitely a loss was not ratifying the ERA. We are still working to do this.

A win for me was the event I organized, the March for Women’s Lives. Over a million people marched in April 2004 to protest against the partial birth abortion ban and other restrictions on abortion. I was in charge of this coalition organizing the march and we worked with the Black Women’s Roundtable and many other coalitions and groups.

AG:  Have we made progress or are we still fighting for the same rights?

AC:  To a large extent: some ways we’ve made 3 steps forward and 2 steps back, as we see in today’s political climate.

AG:  Can you tell me more about your path toward your position now?

AC:  The Feminist Majority’s – core leadership comes out of NOW. We decided to start the Feminist Majority to enlarge the movement and focus on research and action and make the focus college campuses to reach out to the next generation.

Now at the Feminist Majority, we are in a steady transition rethinking stage, figuring out the next steps, given the realities of the political climate